‘Bethlehem is where?!’ Yet another Palin Whopper. 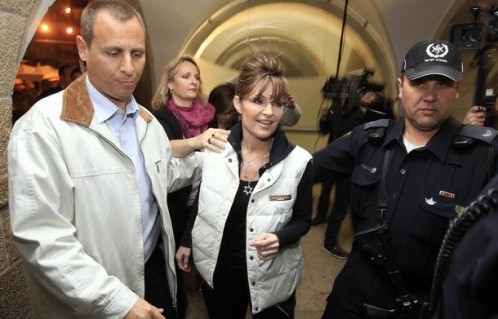 Sarah Palin, the gaffe-prone Inspector Clouseau-esque soccer mom from Alaska is currently embarking on a foreign tour to some foreign relations credentials before running for President of the US of A. Wonderfully predictably Palin has made a whopper of a gaffe already.

On a visit to – equally predictably – Israel, she did not realise that Bethlehem is not actually in Israel but the West Bank. So when her motorcade began to approach an Israeli check-point to leave Israel it slowed, scratched its proverbial head, felt a sinking feeling in the pit of its stomach and then performed a U-turn, scurrying away.

The Israeli Defense Ministry noted that she had not made any request to visit the West Bank, as is customary on such visits.

Truly the thought of this incompetent having her finger on the nuclear button is deeply worrying.

One Response to ‘Bethlehem is where?!’ Yet another Palin Whopper.