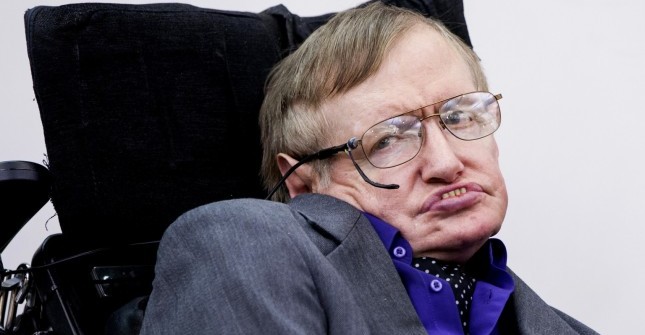 Last night at the City University of New York, Alan Dershowitz attacked the British physicist Stephen Hawking for cancelling a visit to Israel in protest of Israel’s treatment of Palestinians. Dershowitz called Hawking an “ignoramus” and suggested he’s anti-Semitic, then said he is just another “lemming” being pressured by the BDS (Boycott-Divestment-Sanctions) movement, which he said was gaining ground around the world.

Dershowitz made these sober utterances in his third debate with liberal Zionist Peter Beinart over whether there’s a crisis for Zionism.

It was an interesting discussion. Below are some excerpts. I’ll focus on Dershowitz’s and Beinart’s central disagreement over what is fueling the movement against the Jewish state, even inside American Jewish life–anti-Semitism or Israel’s actions.

Dershowitz said that his job is to protect Israel. He doesn’t care what Jews do inside Jewish life; he is concerned with external threats, like Stephen Hawking:

If Jews choose to assimilate, that’s a question of free will, choice and freedom… But I defend Israel against its external enemies, external threats. My job is to protect Israel, the nation state of the Jewish people, along with many other people, from external threats so that Jews can obsess about their internal problems and drive themselves crazy. I want to get back to the point where we are divided and fight among each other and have these kinds of arguments– as long as the Stephen Hawkings of the world leave us alone and don’t try and destroy us.

Dershowitz was most compelling when he deconstructed the idea of Jewish values and opposed Beinart’s call for more religious education. He sounded a lot like Israel Shahak and Yossi Gurvitz, criticizing the Jewish religion:

To the red meat. Moderator Ethan Bronner of the New York Times asked the anti-Zionism = anti-Semitism question. Bronner, the former Jerusalem bureau chief of The New York Times who was so often indifferent to Palestinian conditions in his reporting, is Jewish, and he ventured that “Israel is the central project of the Jewish people of the world,” the one thing that nearly every Jew has some link to.

Bronner: If that’s true, is attacking Israel’s right to exist a form of anti-Semitism?

Dershowitz acknowledged that supporting Israel has become an embarrassment because of the shift in attitude on campus and in Europe, toward what he described as politically-correct anti-Semitism. This also explains Stephen Hawking’s defection.

Dershowitz: In 1967 Jews were able to beat their chest and say wow we’re proud to be Israel, look how tough Israelis are. It was a source of pride. Today it’s a source of embarrassment.

Bronner: Because of the occupation.

Beinart took sharp issue with that analysis. He said that what is driving world opinion and many young Jews away from support for Israel is the condition of Palestinians in the West Bank and Gaza.

Beinart: It’s definitely true that there are a lot of people who don’t want Israel to exist as a Jewish state, and there are many important people in the BDS movement who take that view. But if you don’t believe that their efforts are being fueled by people’s anger at what happens in the West Bank and Gaza, you’re just not connected to reality. And this is the problem with the Jewish community. We go to Israel all the time, and it’s wonderful. But where we don’t go– on Birthright, our synagogue trips– we don’t go to experience Palestinian life in the West Bank. And as a result, we are disproportionately ignorant. It’s actually the non-Jews who go and see those things. And when you go and see those things– I was there last week. Believe me, there’s an Israeli flag on my kid’s wall, I love Israel. It is deeply, deeply upsetting and deeply angering to see the way that people are forced to live because they lack [unintelligible]. It is that anger which is leading to the BDS anti-Zionists getting more and more support, and leading to those Jewish kids hearing from their friends…

Dershowitz: They’ve never seen the West Bank. They are just being politically correct. They are being lemmings, who are being led the way the ignoramus Stephen Hawking who doesn’t know anything about the Middle East was led, by pressure from his fellow academics. That’s what it’s about today. It’s an embarrassment.

Beinart and Dershowitz argued about how democratic Israel is. Dershowitz expressed some indifference about the matter. “Israel’s soul will take care of itself, so long as [its] body is kept intact,” he said, then quoted Scripture to make the point that he wants Israel to survive and be stronger than all its neighbors, more than he wants it to have peace.

Beinart: The message of [the Israeli documentary] The Gatekeepers is precisely that Israel’s ethical character and its physical security are intertwined. This was the bet that Israel’s founders made when they yoked Zionism to democracy, that ultimately if Israel surrendered its democratic character it would not be able to survive physically. Because in today’s age, any nondemocratic government is living on borrowed time. Any nondemocratic government has a huge legitimacy problem in today’s world, and that’s why you can’t distinguish so easily Israel’s democratic survival and its physical survival.

Dershowitz: I don’t disagree with that, but… the worst case scenario Israel is still among the top 5 or 10 percent of the countries in the world in terms of democratic values–

Beinart: Not on the West Bank–

Beinart: You need to spend more time there.

Dershowitz: I spend a lot of time there.

Beinart. Go to Shuhada street [in Hebron], where Palestinians are literally not allowed to walk on that street even if they live on that street and tell me that Israel’s soul in Hebron is doing well.

Dershowitz. You don’t look at one place–

Beinart said that Palestinians’ inability to vote for the government that is determining their lives is the reason there is a global campaign to delegitimize Israel. If those Palestinians did have the vote, there would have been a “radically different outcome” in the last Israel election.

Dershowitz challenged Beinart: But Israelis chose that government, and it supports the occupation; what would you do to overrule them, impeach Netanyahu?

Beinart: We stand up as Americans and say this is bad for American national security. And we stand up as Jews and say that Our honor is on the line in the question of how Jews use power…. That’s what we do.

An excellent speech. Beinart concluded by addressing the power of the Israel lobby.

Beinart: Look Israel is not going to– the United States is Israel’s only important strategic partner in the world. If the U.S. president said that the relationship with the United States is going to change if you don’t support the ’67 parameters, believe me, the Israeli government would fall.

Dershowitz responded with Bill Kristol’s warning to another liberal Zionist on the Upper West Side a year or so back: he warned Beinart against sitting in comfort in New York and telling the Israelis how to behave.

Beinart: We have a right to decide what is best for the United States. I believe that America must always support Israel’s security interest… But we as Americans and Jews do not have to fund and support the settlement enterprise that is destroying Israel’s democratic character…. We can have a president who said that very loudly…