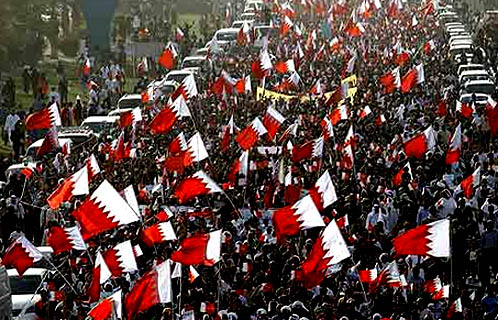 On the heels of Bahrain’s announcement that it will lift its emergency rule on June 1, I have a few thoughts. As a conscientious citizen of the GCC, I visited the island two weeks ago with a few niggling questions in mind. Here’s what I came away with:

1 – What’s with the human rights abuses?

The entire Gulf has maintained a pretty questionable record on human rights over the years, though it’s generally been kept off the headlines.

But two recent trials have bought Bahrain to the limelight — and not in a good way. Four people were sentenced to death last month for the killing of two policemen, and 21 suspects are currently accused of plotting to overthrow the government.

If Bahrain is serious about presenting itself as a progressive nation, then surely an adjudicator from an independent organization (the UN?) should ensure that the suspects’ basic rights are respected. These include the right to fair legal representation (can a murder trial two weeks after the incident be considered fair?), and the dismissal of confessions if made under the threat of torture and physical duress.

A lawyer hired to defend one of the four accused police murderers said he had only met with his defendant twice, once for a half hour and again right before his trial. Even worse, another defense lawyer, Mohammed Al-Tajer, was arrested on April 15 and has since disappeared. He has not been heard from since April 17 and no formal charges have been filed against him.

In addition, Human Rights Watch has documented four cases where suspects have died under mysterious circumstances while under questioning. In the case of Ali Isa Ibrahim Saqer, his body was photographed before burial. It was heavily scarred in a manner consistent with physical abuse. It is claimed by some that torture has played a part in the questioning of opposition figures, leading to deaths that have been dismissed as  ‘asthma attacks’.

Why – and does the Bahraini monarchy give the green light to these acts? Surely the government must realize the whole world is watching everything that happens?

If, for argument’s sake, the accused are actual murderers who did plot to overthrow the government, then their abuse has completely discredited the process by which any verdict can be reached.

There are better ways to handle civil unrest.

2 – What exactly is going on within the ranks of the royal family?

According to a senior US official, the king and crown prince are more lenient towards reform; however the prime minster – the king’s uncle who is 76 and been in power for 40 years – controls the island’s security forces and has other ideas.

It is widely reported that the two factions within the royal family have icy relations and that their dysfunction is not doing the country any favours. As one Bahraini friend said to me, “All their dirty laundry is being dumped on the people of Bahrain. Sadly, we’re paying the price for their internal politics.”

In addition, neighboring giant Saudi Arabia’s hardliner stance against the threat of Iranian control is a factor. Their pressure to squash the protests is real and the tanks that pervade the streets of Bahrain today are a reminder.

3 – How will the questionable decisions play out?

The mass arrests of hundreds of protesters is somewhat defensible in the name of trying to achieve stability, but the firing of over 1000 people from their government jobs is extremely unwise. Not only is it going to create more of a rift between the Sunnis and the Shiites, but those left unemployed with no prospects for work will only be thinking of ways to get back at the government.

Bulldozing illegal extensions to mosques (which have stood for years on government land) can only add fuel to the fire.

Incidentally, these demonstrators are still Bahrainis. The monarchy’s antagonizing of a vocal, discriminated majority within its own populous is not sustainable. South Africa anyone?

4 – To what extent are stories planted from each side?

In the three days I spent on the island, I heard some doozies. A friend who lives on Amwaj, a luxury beach compound built on reclaimed land, repeated a story she heard from a policeman. He claimed that a plot by the protestors to blow up the compound was uncovered. It sounded like an all-too-convenient story to me, and one totally inconsistent with their methods of protest. (Probability, 1/10)

Is Iran really behind this uprising? (They’re happy about it, and have been in touch with certain Shiite leaders on the island, but the ignition likely came from within).

Are female pupils in Shiite villages really being threatened with rape by policemen? McClatchy Newspapers reported that a 16-year-old was beaten and verbally harassed by police after acknowledging that she attended demonstrations at the Pearl Roundabout.

I’m not disputing the validity of her account, but there is no way the McClatchy reporter could have corroborated it. In fact, I don’t think he was even in Bahrain, considering the article had no dateline. As such, it should have read somewhere that, “These allegations cannot be independently verified.”

The article did start by attributing the claims to ‘victims, human rights advocates and a former member of parliament.’ The trouble is that none of the above has credibility within the ranks of the Bahraini establishment. Local human rights activists and ex-parliament members have been active demonstrators, so according to loyalists (and I heard this often) their accounts lack impartiality.

As a non-Bahraini looking in, I can see consistency in this pattern. Protestors’ stories are being taken at face value, while defenders of the monarchy are branded as exaggerating or flat-out fabricating their stories.

Case in point: the Bahraini government insists that the now famous Salmaniya Hospital was one of the uprising’s headquarters, leading to its sectioning off by police. Forty-seven doctors and nurses took part in illegal demonstrations and allegedly refused to treat Sunni patients.

From the protestors’ angle, police targeted medical staff to stop them from attending to injured protestors (I read this in plenty of news reports). They also claimed police posed as ambulance drivers, and beat injured protestors rather than help them.

Though there are photos, youtube links and ‘witness accounts’ to back up most of these claims, I suspect the truth lies somewhere in the middle.

5 – Why haven’t moderate leaders from both sides spoken up?

A well-to-do Bahraini Shiite friend expressed disappointment in his community for not distancing itself from the few radical clerics who effectively hijacked the Pearl Roundabout’s message. The likes of Hassan Meshaima – the Hezballa-tied opposition figure who was inexplicably let back into the country during the thick of the demonstrations as a fig leaf – have called for the overthrow of the monarchy. That sentiment, which presumably suggests replacing them with a Tehran-like structure, is not widely shared by the masses.

Why then have the likes of the Jawad family, who supported the demonstrations with free food from their giant supermarket chain, not spoken up against the vitriol?

By the same token, why have prominent Sunni families stayed tight-lipped while the kingdom fires indiscriminately on unarmed protesters and tortures the accused?

In each case leaders need to step up and say “Not in my name.”

I just hope it is not too late: Over half a million Bahrainis who share the same religion are now thoroughly divided by their two sects. It’s heartbreaking, and Bahrain won’t be the same until another generation comes along, one that didn’t bear witness to this mess.

I come from the Gulf, I make observations. I write stuff.