‘Bacha Khan’: An Example for the Arab Spring 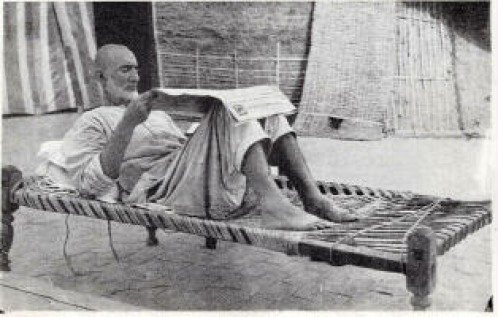 People power and the use of mass nonviolent action are not new to Muslims. Even before Gandhi, political and spiritual leader Abdul Ghaffar Khan – now more widely referred to as “Bacha Khan” – was drawing on Islamic and tribal teachings to train “nonviolent soldiers” in 1920s India (now Pakistan) to rely on their honour, courage and the truthfulness of their cause to confront the powerfully armed British Empire.

When people’s movements use violence against state military forces, history shows that they are almost always defeated. But when people use nonviolence, giving the state no pretext for repression, they gain the moral authority and support that, in many cases during the last hundred years – such as in Chile and South Africa – leads to a successful transition from dictatorship to democracy.

Youth in parts of the Middle East are leading the “Arab Spring” social movements, pressing for change today. They believe the international economic and political system excludes their voices and offers little hope. Khan grew up in a similar world circa 1900, watching the exploitive relationship between landowners and poor tenant farmers in Peshawar Valley, and listening to local leaders tell families not to send their children to school so as to keep them poor and underpowered. After completing his secondary education, Khan also received a commission to be part of a prestigious corps of Pukhtoon (also known as Pashtun or Pathan) soldiers in the British Army, but refused due to his anti-colonial sentiments.

Searching for more authentic religious leaders, Khan discovered Islamic values of peace and charity toward others by studying the teachings of the Qur’an and the life of the Prophet Muhammad. Khan promoted education and social reform, teaching about core values of Islam and Pukhtoonwali, the cultural values and way of life of the Pukhtoon tribe. He started 70 schools that taught both boys and girls, including his own daughter, even though this went against the norms of the Pukhtoon culture of the day.

Just as today’s governments aim to suppress the Arab spring, the British recognised Khan’s leadership as a threat, closed his schools and jailed him for three years.

But instead of accepting defeat, Khan planned a more strategic social movement. In 1928 Khan started the newspaper PUKHTOON, teaching sacrifice, courage, nonviolence and charity towards others. Building upon this media outreach, he organised a grand jirga meeting in 1929, in which tribal leaders assembled together, to start an organised nonviolent movement called the “Servants of God.” Wearing red shirts and walking in straight rows, these unarmed youth were deeply spiritual, studied Islam and practiced nonviolent drills daily to test their ability to endure repression without retaliation.

The British tried to silence the Red Shirts by firing on them, imprisoning and torturing them. They too suffered like today’s brave citizens across the Middle East. But unlike some of today’s rapidly developing social movements from Bahrain to Syria, the Red Shirts spent years training and connecting their religious values in nonviolence with a clearly articulated set of political, social and economic alternatives.

Khan’s Red Shirts were not just “against” British colonialism. They provided local leadership for education and development, and stood up for the dignity and rights of their community. They balanced affirmations of the rights and dignity of all people with teachings about responsibility and sacrifices needed to serve those same communities.

At its height, there were 100,000 red-shirted Servants of God, more than any other “nonviolent army” in the history of humanity. Each person in Khan’s army took an oath of nonviolence, vowing not to harm their enemies but also forgiving family and friends in domestic quarrels. All were volunteers and embraced a life of simplicity. This holistic approach fostered incredible group discipline to prevent instigators from provoking them to violence.

The beauty of nonviolent action is that throughout history, people around the world discover it on their own without getting trained or having superhuman qualities. The heroes of this Arab Spring are not magnificent saints. They are ordinary people, putting their lives on the line for change. But it is also true that any great art form improves with study.

Marching in the streets is not the only element of social change. The internal dialogue, training, and development of both structures and economic, political and social platforms are missing in many of today’s movements. Khan’s efforts to build the internal structure of his nonviolent army hold important lessons for today’s Arab spring.

Ali Gohar is a rahbar (guide) and Founder of Just Peace International in Peshawar, Pakistan. Lisa Schirch is Professor of peacebuilding at Eastern Mennonite University and Director of the 3D Security Initiative.

One Response to ‘Bacha Khan’: An Example for the Arab Spring