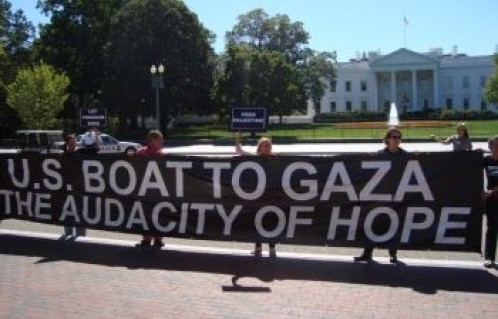 The United States flotilla group, US to Gaza, reacting to Israeli threats of violence, sent a letter to President Barack Obama informing him that:

As U.S. citizens we expect our country and its leaders to help ensure the Flotilla’s safe passage to Gaza – as our country should support our humanitarian demand that the Gaza blockade be lifted. This should begin by notifying the Israeli government in clear and certain terms that it may not physically interfere with the upcoming Flotilla of which the U.S. boat—The Audacity of Hope — is part.

The group asks that people call the White House (202-456-1111) in order to express their support for the international nonviolent protest and to tell the President that they “expect [him] to take action to uphold the rights of peaceful citizens to safe passage on the seas.”

I have little hope that Mr. Obama would respond to a call to protect Americans from an Israeli assault. He has failed to do this in the past. But isn’t it a wonderful irony that the name of the U.S. boat is a phrase closely associated with the President? Although Obama is not on board, maybe there are groups and individuals who have not publicly supported the flotilla movement in the past that would, at least, demand strongly that the IDF refrain from using violence against citizens who are obviously peaceful demonstrators.

Isn’t nonviolent protest one of the tenets of activism for American liberals and progressives?