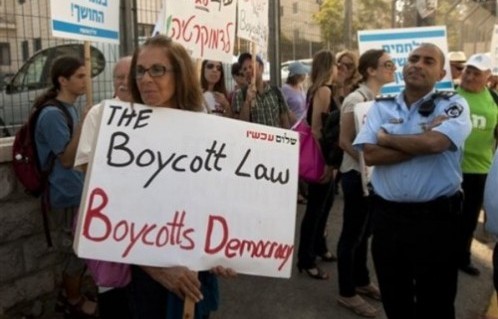 Last summer, a group of prominent Israeli actors and artists signed a letter declaring their refusal to perform in the newly built cultural centre in Ariel, the largest Jewish settlement situated deep in the West Bank. The letter ignited a debate in Israel about the right to publicly express and act on their opposition to the settlement project and continued occupation of the territories seized in the 1967 war.

Nearly a year later, on the night of 11 July, Israel’s parliament passed the Boycott Prohibition Law, also known as the anti-boycott law. The law determines that any public call for a cultural, economic or academic boycott of “the State of Israel, one of its institutions, or an area under its control” is a civil offence. Under this law, any individual or organisation that calls for a boycott while on Israeli soil is liable to be sued for compensation by any Israeli individual or group that claims damages from such a call, without having to provide evidence.

The passing of the law is the latest in a series of anti-democratic legislation and a dark turning point in Israeli history. It strips individuals of the right to non-violently and openly express and act on their opposition to governmental policies in the hope of trying to change them – a fundamental staple of any democracy, and a severe violation of freedom of expression.

But, at the same time, it also represents an opportunity.

By criminalising the call for a boycott of any area or institution under Israeli control, the law effectively erases the distinction between Israel and the Occupied Territories. It thus anchors into law Israel’s continued control of territories it conquered in 1967, and as such formalises the occupation. This change will hopefully force Israelis – most of whom favour a two-state solution – to become more aware of the consequences of what they will say and do, thus presenting an opportunity for citizens to take a stand and engage more politically.

In reaction to the law, an initiative was started by the left-wing Meretz Party to label all goods produced in the settlements. The veteran organisation Peace Now came out in favour of a boycott of settlement products for the first time ever. The government’s effort to silence dissent through draconian, anti-democratic legislation is in fact having the opposite effect, spurring groups to respond with increased protest and resolve.

The boycott law compels Israelis to confront the divisive issue of the occupation even more than before. For example, those artists who refused to perform in Ariel are now implicated by the law, and will have to decide whether to put their careers on the line for what they believe in. Parents who oppose settlements will have to decide whether to withdraw their kids from school tours to East Jerusalem and Hebron sponsored by the Ministry of Education – an act now considered liable for damages.

Israeli civil society and human rights organisations immediately condemned the law as anti-democratic and a severe violation of freedom of speech, insisting the act of boycotting is a legitimate and non-violent form of protest accepted in democratic countries. They announced their plan to petition the High Court of Justice to disqualify the law on the grounds that it is unconstitutional. The organisations taking part in the petition include Gush Shalom and the Coalition of Women for Peace, who openly advocate the boycott of settlement products and are now in danger of losing their tax-exempt status.

Furthermore, those Israeli individuals and groups who have been working together for years with Palestinians to bring an end to the occupation are only further empowered by this law, as it legitimises what they have been saying for years: a country cannot be democratic while controlling another people.

Indeed, assuming the majority of Israelis want to live in peace and justice with their neighbours, the boycott law will hopefully provide them with an opportunity to come out of the woodwork and make themselves heard.

Mairav Zonszein is an Israeli-American journalist based in Tel Aviv, and a writer and editor at 972mag.com.