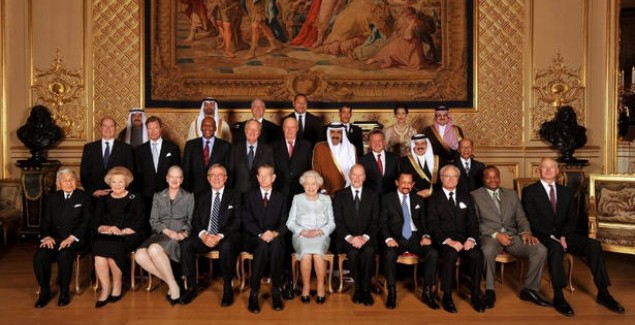 Across the United Kingdom and in all the present and former colonial outposts, Brits are working themselves into a frenzy about the Queen’s Diamond Jubilee celebrations. They mark the 60th anniversary of the accession of our dear Queen.

Here in Bahrain, sturdy patriots are getting ready for a knees-up at the British Club, and no doubt they will be singing God Save the Queen at the Embassy.

Of course the media in Bahrain has given prominent coverage to the presence of HM King Hamad at the lunch the Queen hosted for royalty from around the world. In addition to King Hamad, the guests included the Emperor of Japan, the Kings of Malaysia, Swaziland, Lesotho, Jordan, various Princes and Emirs from the GCC, or close relatives thereof, and most of the crowned heads of Europe, who also happen to be relatives of Her Majesty.

During my customary five-minute read of the local paper, I came upon a magnificent spread covering King Hamad’s presence at the lunch. In addition to a picture of HM the King being greeted by Prince Philip, there was a formal group photo of the event.

That’s what surprised me. In addition to all the crowned heads – and in prominent positions around the Queen – sat the Kings of Greece, Bulgaria and Romania. Well, ex-Kings actually.

Now I know that there has been some comment in the UK media about the presence of certain monarchs at the lunch, which the Queen has quite rightly ignored. After all, this was a private lunch. She can invite who she pleases, and knows better than to insult Britain’s friends.

Yet people do take offence, and I would have expected a little hoo-haa from our European partners in Greece, Bulgaria and Romania, all of which last time I checked were fellow-members of the European Union and republics to boot. Would the media in those countries take issue with this little cabal of ex-Kings being given equal status to the crowned heads? After all the Queen of Spain declined to attend because of her fellow-citizens’ sensitivity over our 300 year occupation of Gibraltar. Perhaps Greece at least has more important issues to concern itself with than the presence of Ex-King Constantine at Her Majesty’s lunch.

Then I wondered why only three ex-Kings were invited. There are a number of ex-royals out there whom you would have expected to be there. the exes of Italy, Serbia, Albania to name a few. And what about the successor to Kaiser Wilhelm II of Germany, one of the Queen’s closest relatives. How about a Habsburg and a Romanov, or Henri D’Orleans, claimant to the French throne?

Come to think of it, why stop there? Would it not have been possible to invite a representative of the Mongol Empire from the millions of descendants of Genghis Khan? Or possibly an Ottoman or a Byzantine heir?

Since I – in common with every other male in the world – have a 1 in 200 chance of carrying the DNA of Genghis, I would have been delighted to attend on behalf of the family of the Great Khan.

I suspect that Her Majesty took the view that if she was too liberal with the invitations, the ex-royals might outnumber the royals. Which would be a salutary reminder of the tenuous nature of royalty.

Anyway, it sounds as if they had a splendid lunch. Somehow I suspect that the British Club will not come up with English asparagus, Windsor lamb and Kent strawberries.

Like millions of loyal fellow Brits, I wish the Queen well. I hope she has a lovely day out on the Thames in her special barge, and that for once, it will stop raining.