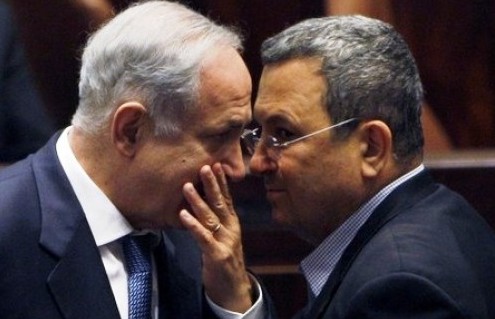 Sometimes Ehud Barak has trouble staying on message. Last year in Herzliya, he warned of Israel becoming an apartheid state like South Africa, a usually verboten analogy among Zionist officials, unless a viable Palestinian state is created soon. “As long as in this territory west of the Jordan river there is only one political entity called Israel it is going to be either non-Jewish, or non-democratic,” Barak said. “If this bloc of millions of ­Palestinians cannot vote, that will be an apartheid state.” Whoops.

This time around, however, Barak pulled the rug out from under Israel’s favorite scare tactic. The former Israeli Prime Minister/current Minister of Defense/Deputy Prime Minister told Ha’aretz today that even “[i]f Iran succeeds in developing nuclear weapons, it is unlikely to bomb Israel,” thereby undermining one of the Netanyahu administration’s main propaganda lines that a nuclear-armed Iran (if one ever were to exist) would represent an immediate “existential threat” to the self-proclaimed Jewish state.

According to Ha’aretz, Barak voiced his opinion that “Israel should not spread public panic about the Iranian nuclear program and responded to a question about whether he thought Iran would launch a nuclear attack on Israel by saying, “Not on us and not on any other neighbor.”

Just a few days ago, on May 1, both Israeli Prime Minister Netanyahu and Israeli President Shimon Peres repeated their dire warnings and tired talking points about the supposed Iranian threat. Speaking at the opening ceremony of Holocaust Memorial Day at Yad Vashem, Israel’s memorial to Jewish victims of Nazi genocide, Netanyahu and Peres both “stressed Iranian nuclear aspirations as an existential threat to Israel,” with Netanyahu declaring that “Iran, Hezbollah, and Hamas are working openly for the destruction of our people.” He continued, “We cannot place our fate in the hands of others,” and then warned that, “when Israel and the Israel Defense Forces say, ‘Never Again,’ they mean precisely that.” Going for broke, Netanyahu just started making things up. “[T]oday, new enemies are rising, and as they deny the Holocaust, call for the destruction of our people,” he said, “those wishing to destroy the Jewish state” are “arming themselves with nuclear weapons in order to realize those ambitions.” Naturally, he threw in the “existential threat” canard: “The threat to our existence isn’t a theoretical one, it cannot be minimized, it stands before us, before all of humanity, and it must be stopped,” he bellowed.

Peres went even further, stating, “Iran’s fanatic leadership is a danger to the entire world. It is not only a threat to Israel. It is a threat to any household, anywhere. It is a real risk to the fate of humanity.”

Drawing a bogus parallel from Nazi intentions to Iranian ones has long been a mainstay of Israeli fear-mongering despite its obvious absurdity.

Meanwhile, during his Ha’aretz interview, Barak explained, “I don’t think in terms of panic,” continuing,

“What about Pakistan, some political meltdown happens there and four bombs wind up in Iran. So what? So you head for the airport? You close down the country? Just because they got a shortcut? No. We are still the most powerful in the Middle East.”

This is not the first time Barak has made such comments. In April 2010, Barak told Israel Radio, “Right now, Iran does not pose an existential threat to Israel. If Iran becomes nuclear, it will spark an arms race in the Middle East. This region is very sensitive because of the oil flow; the region is important to the entire world. The fact that Iran is not an immediate threat, but could evolve into one, means that we can’t let ourselves fall asleep.”

A month before that, Barak, while speaking at the Washington Institute for Near East Policy (WINEP) in February 2010, said plainly, “I don’t think that the Iranians, even if they got the bomb, they are going to drop it immediately on some neighbor. They fully understand what might follow. They are radicals but not total meshuganas.” He continued to explain his belief that the Iranian leaders “have quite sophisticated decision-making process and they understand realities.”

In September 2009, Barak, who was then the head of the Labor party, told Israeli dailyYedioth Ahronoth that “Iran does not constitute an existential threat against Israel.” Later in the interview, he repeated this assessment, saying, “I am not among those who believe Iran is an existential issue for Israel,” continuing, “Israel is strong, I don’t see anyone who could pose an existential threat.” Barak also stated, “Right now, Iran does not have a bomb. Even if it did, this would not make it a threat to Israel’s existence. Israel can lay waste to Iran.” In a direct rebuke of the oft-heard Netanyahu refrain, Barak said plainly, “I don’t think we are on the brink of a new Holocaust.”

Still, in his remarks to Ha’aretz today, Barak made sure to tread familiar fear-mongering ground by stating his belief that the Iranian leadership could not necessarily be trusted not to do something crazy (they are bearded Muslims after all).

“I don’t think that anyone can say responsibly that these ayatollahs, if they have nuclear weapons, are something you can rely on, like the Politburo or the Pentagon,” Barak said. “It’s not the same thing. I don’t think they will do anything so long as they are in complete control of their senses, but to say that somebody really knows and understands what will happen with such a leadership sitting in a bunker in Tehran and thinking that it’s going to fall in a few days and it is capable of doing it? I don’t know what it would do.”

Clearly, according to Barak, only governments run by Western white people are mature and rational enough to have nuclear weapons. Also, the idea of the Iranian leadership “sitting in bunker in Tehran” is ridiculous enough without Barak’s wishful thinking about the potential collapse of the Islamic Republic thrown in (though it is clear that the deliberate inference is to make a mental connection with the Führerbunker beneath Hitler’s New Reich Chancellery in Berlin). Additionally, the idea of the Iranian leadership detonating a nuclear weapon (that they don’t even have) in order to fend off regime change in a blaze of radioactive glory is complete nonsense. “I think we are seeing the beginning of the end of the dictatorships in the Arab world, including the Iranian one,” he said, demonstrating his apparent misunderstanding of how the Iranian governmental system actually works.

Beyond that, there is ample evidence that Iran, which maintains a strict “no first strike” policy, is not prone to act rashly with regard to military aggression, especially against countries with superior capabilities and nuclear arsenals. In October 2008, Congressional foreign policy advisor Gregory Aftandilian, speaking at a Center for National Policy event titled “A Nuclear Middle East,” noted that Iran is “not stupid” and “has a long history, thousands of years, of statecraft,” concluding simply, “Tehran is not suicidal.”

In a reasonable and realistic critique of Jeffrey Goldberg’s Israeli propaganda puff piece, Steve Clemons of the New America Foundation wrote last year, “Iran has shown itself to be a strategic, rational, albeit ruthless, calculator of its interests — not an irrational, suicidal nation.” Center for American Progress reporter Matt Duss and national security analyst Andrew Grotto also agree that Iran is neither a “suicide nation” nor a “martyr state.” Late last year, a diplomatic cable released by WikiLeaks revealed that Australia’s top intelligence agency, the Office of National Assessments (ONA) viewed “Tehran as a sophisticated diplomatic player” which was not “liable to behave impulsively or irrationally.” A report in the Sydney Morning Herald quoted ONA chief Peter Varghese as saying, “‘It’s a mistake to think of Iran as a ‘rogue state’.”

Iranian government and military officials have long stated that they will act militarily in self-defense only if their country is attacked, never preemptively or preventatively, and have never issued threats about initiating aggression against another nation.

Despite the hysterical (and strikingly racist and Islamophobic) claims of opportunistic serial liars like Goldberg (who has warned of Iran’s “theologically driven, eliminationist anti-Semitism”), Netanyahu (who accused Iran’s leaders of belonging to a “messianic apocalyptic cult”) and Alan Dershowitz (who claimed Iran had “demonstrated a willingness to sacrifice millions of their own people to an apocalyptic mission of destruction”), even the United States government concurs with assessments that Iran is a rational actor on the world stage, concerned only with national self-defense rather than aggressive military offensives.

In April 2010, in a statement before the United States Senate Committee on Armed Services, Defense Intelligence Agency director Lieutenant General Ronald L. Burgess stated, “Iran’s military strategy is designed to defend against external threats, particularly from the United States and Israel. Its principles of military strategy include deterrence, asymmetrical retaliation, and attrition warfare.” He added that Iran is “unlikely to initiate a conflict intentionally or launch a pre-emptive attack.” The intelligence report delivered to Congress that day in conjunction with Burgess’ testimony also revealed the assessment that Iran maintains a “defensive military doctrine, which is designed to slow an invasion and force a diplomatic solution to hostilities,” and followed that “Iranian military training and public statements echo this defensive doctrine of delay and attrition.” This identical position was reaffirmed this past March in Burgess’ 2011 testimony before the Armed Services Committee.

A month earlier, in his “Statement for the Record on the Worldwide Threat Assessment of the U.S. Intelligence Community for the House Permanent Select Committee on Intelligence,” Director of National Intelligence James R. Clapper declared that the official judgment of all 16 U.S. intelligence agencies is that “Iran’s nuclear decisionmaking is guided by a cost-benefit approach, which offers the international community opportunities to influence Tehran. Iranian leaders undoubtedly consider Iran‟s security, prestige and influence, as well as the international political and security environment, when making decisions about its nuclear program.”

So, will Barak’s candor temper Netanyahu’s rabid bellicosity in days to come? Unlikely. But are his comments a welcome break from the constant Chicken Littlesque doomsday hysteria that seems to define Israeli hasbara? Yes, they are. As such, get ready to see a whole new level of fear-mongering trotted out by both Israel and the U.S. in the near future in order to wash away the frustrating and inconvenient truths spoken by Barak today.