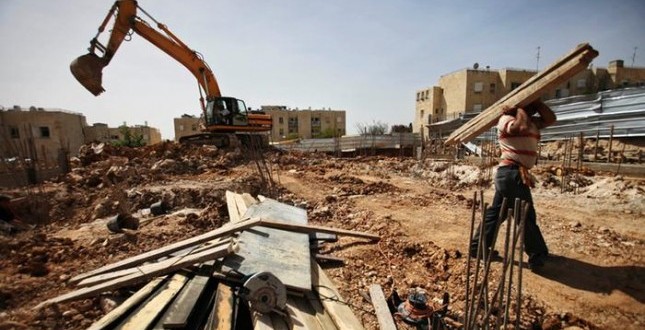 Huge news out of Europe. Effective Friday, a new European Union directive with a “territorial clause” bans all EU funding of projects in territories occupied by Israel since the ’67 war: the West Bank including East Jerusalem, the Gaza Strip and the Golan Heights. The new directive(pdf), which covers all areas of co-operation between the EU and Israel, culture, academia, sports, economics and science, requires the Israeli government to “recognize in writing that the West Bank settlements are not part of Israel.”

Future agreements between the European Union and Israel must include the explicit exclusion of Jewish settlements in the West Bank or East Jerusalem, according to a new EU directive described by an Israeli official as an “earthquake”.

The EU guidelines, adopted on 30 June, will prohibit the issuing of grants, funding, prizes or scholarships unless a settlement exclusion clause is included. Israeli institutions and bodies situated across the pre-1967 Green Line will be automatically ineligible.

The Israeli government will be required to state in any future agreements with the EU that settlements in the West Bank and East Jerusalem are outside the state of Israel.

The directive, part of the 2014-20 financial framework, covers all areas of co-operation between the EU and Israel, including economics, science, culture, sports and academia. It does not cover trade, such as produce and goods originating in settlements.

An EU statement said the guidelines “set out the territorial limitations under which the commission will award EU support to Israeli entities … Concern has been expressed in Europe that Israeli entities in the occupied territories could benefit from EU support. The purpose of these guidelines is to make a distinction between the state of Israel and the occupied territories when it comes to EU support.”

So, the rules do not apply to trade in the private sector, which includes settlement produce. Nonetheless Palestinian legislator Hanan Ashrawi characterized the new rules as “significant“:

“The EU has moved from the level of statements, declarations and denunciations to effective policy decisions and concrete steps which constitute a qualitative shift that will have a positive impact on the chances of peace,” said Ms Ashrawi.

Israeli officials sound stunned. “We are not ready to sign on this clause.”

And: “the result could be a halt to all cooperation in economics, science, culture, sports and academia.”

A senior Israeli official, speaking on condition of anonymity, described the new ruling, which was published on June 30, as an “earthquake.”

“This is the first time such an official, explicit guideline has been published by the European Union bodies,” the senior official said. “Until today there were understandings and quiet agreements that the Union does not work beyond the Green Line [the pre-1967-war border]; now this has become a formal, binding policy.”

The official noted that the significance of the regulation is both practical and political: From now on, if the Israeli government wants to sign agreements with the European Union or one of its member states, it will have to recognize in writing that the West Bank settlements are not part of Israel.

In the Prime Minister’s Office and Foreign Ministry there is great tension and anxiety over the new regulation and its implications for Israeli-EU relations. The efforts of Prime Minister Benjamin Netanyahu and Deputy Foreign Minister Ze’ev Elkin to stop the move have all failed. Senior EU officials say they would like to hold talks with Israel concerning the new guideline, but since it will go into effect by the end of this week, the chance of its being amended is extremely slim.

“We will have to decide what to do from this day forward,” a senior Israeli official said. “We are not ready to sign on this clause in our agreements with the European Union. We can say this to the Europeans, but the result could be a halt to all cooperation in economics, science, culture, sports and academia. This would cause severe damage to Israel.”

In a separate article Ravid also reports, according to US officials, the EU will go further likely requiring the labeling of “settlement goods,” if John Kerry’s efforts to “kick start the peace talks” fail. And that would impact economic trade.

Omar Barghouti, in communication with Mondoweiss, welcomed the new directive while reminding the EU is “obliged, morally and legally, to do much more”:

Given the EU’s profound complicity at all levels in maintaining Israel’s regime of occupation, colonization and apartheid, these guidelines constitute a bare minimal step in the right direction that may open the door to more effective boycotts against Israel in the future. We welcome them, but we also must soberly remind the European establishment that it is obliged, morally and legally, to do much more on the ground to atone for its role in Israel’s crimes against the Palestinian people.

Coming on the heels of Israel’s “moment of truth” that we reported yesterday, in which Europe is “exploring” sanctions against companies tied to the occupation, it feels as though the ground is shifting in immeasurable ways.

Will this directive hold? It remains to be seen. But we all know change is inevitable. We’ve known for a long time there would be a breaking point; this could signify the beginnings of a radical departure from business as usual. Europe is leading. Where is the United States?

Update: Haaretz is reporting a “hasty and urgent” meeting took place at the Israeli Prime Minister’s office today, and a statement was released “blasting the European Union over its decision to condition future agreements with Israel on the latter’s recognition of the West Bank, East Jerusalem and the Golan Heights as occupied territories. “

“We will not accept any external edicts on our borders,” Netanyahu said in a scathing response.
…..

“As the prime minister of Israel, I will not let anyone harm the hundreds of thousands of Israelis living in Judea and Samaria, in the Golan Heights, or in Jerusalem – our united capital,” he said. “The issue of borders will be determined only in direct negotiations between the sides.”

And this certainly has hit a nerve with Danny Dayan. Dimi Reider’s  +972 has been following Dayan’s twitter feed and look what’s popped up : Dani Dayan compares EU move to death camp selection !

2 Responses to “An Earthquake”: Israeli Authorities’ View of EU Decision