Among the People of Benghazi: A Westerner’s View 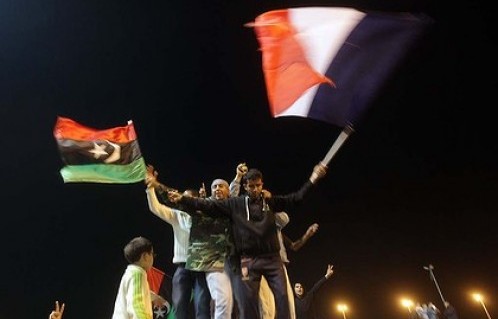 Susanne Tarkowski Tempelhof is on the ground in Benghazi, Libya, working with the Shabakat Group which she says “has an extensive network in country amongst the transitional government, tribal chiefs, rebel forces, former Qaddafi officials, and the civilian populace.”

I don’t know her personally, but we have many friends and colleagues in common, people I trust more than anyone else in this business. So when I found out she was over there and had embedded, so to speak, with the anti-Qaddafi rebels, I had to ask her some questions that hardly anyone seems to have an answer to yet.

MJT: Who, exactly, are these rebels you’ve met? Are they democrats? Tribal leaders? Islamists? All of the above? What?

If you look at the demographics in Libya, 82.6 percent of the people are literate, an estimated 88 percent live in cities—mostly in Benghazi and Tripoli—and about half the population is under the age of 15. So the young urban rebels in Benghazi may be fairly representative.

The tribes exist here, but they’re more of a cultural phenomenon than a political one. I don’t think anyone here imagines, or wants, the tribes stepping up to power, though this may differ somewhat between regions.

About the Islamists—there are radical elements amongst the rebels, to be sure, but they are a minority, and they’re all grateful to the West at the moment. You would be amazed to see the number of people around here waving Western flags and thanking the West, especially France.

In Benghazi, every person I’ve met so far has insisted on showing me the bridge in town where the Qaddafi troops arrived and started firing—and that bridge is actually inside Benghazi—saying he would cleanse the city “street by street, and house by house.” They all say, “Allah saved us, he sent us French and British and American planes like angels, Alhamdulillah.”

Hillary Clinton said she thought we saved thousands of lives with the no-fly-zone that night. We may have saved tens or even hundreds of thousands lives. The residents of Benghazi, like the rest of the Libyan people, will always remember this, and it may well diminish the radical Islamist threat from here in the future.

This is only my personal assessment, of course, and I’ve only been on the ground a short time, but my gut feeling is that we should do everything we can to support these people. A friend of mine wrote in a op-ed a couple of weeks ago that they’re like the “Libyan tea party,” and that seems about right. It really does look like a genuine nationwide people’s movement for freedom.

MJT: What’s the mood there right now? Are people hopeful? Afraid? Maybe a little of both?

Susanne Tarkowski Tempelhof: They’re shocked by Qaddafi’s brutality. Even though he has never been a nice guy, they’re shocked that he is willing to bomb his own country and kill so many people. I don’t think anyone imagined he would go so far.

There’s a great energy in this place. People are optimistic, but also nervous. It’s exciting and tense.

MJT: Do we have any good reasons to believe the rebels will treat defeated Qaddafi loyalists any better than Qaddafi’s forces would treat them?

Susanne Tarkowski Tempelhof: I doubt the rebels are being nice to Qaddafi’s people they catch, and the African mercenaries are especially hated, but they can’t match Qaddafi in violence. They won’t bomb civilian areas or conduct campaigns of mass “cleansing” and rape. Qaddafi’s violence is on an entirely different level.

We do need to be watch out, though, after the conflict ends, in case Libya gets into a situation like the French Revolution where everyone who was even remotely connected to Qaddafi gets killed.

MJT: Are the rebels using NATO as a tool, or are they genuinely pro-Western? Can you tell?

Susanne Tarkowski Tempelhof: They’re genuinely surprised that they’re getting so much help from the West, and they are very very grateful for it. Everyone is saying, “Sarkozy saved Benghazi! Thank you Sarkozy, and thank you Cameron and Obama.” The West is heroic here in Benghazi.

MJT: Are any women involved, or is the rebel movement strictly a man’s world?

Susanne Tarkowski Tempelhof: I haven’t heard of any women being on the front lines fighting, but they’re doing a lot of work in Benghazi. The rebel media center, for instance, has some very smart young women—many of them Western educated—helping foreign journalists, organizing press conferences, and so on.

MJT: CNN reporters in Tripoli were taken by government minders to a funeral for civilians killed in air strikes, but the funeral was obviously staged, there were no grieving family members present, and some of the coffins were empty. Hamas and Hezbollah have staged stunts like this when fighting Israel. Have you seen or heard of the rebels doing anything similar?

Susanne Tarkowski Tempelhof: I haven’t seen or heard of anything like that at all.

MJT: How are they treating you personally?

Susanne Tarkowski Tempelhof: Exceptionally well. They have given me free office space, and I have a lovely assistant, driver, and translator working for free. I haven’t paid for a single meal since I arrived. Everybody here is working for free. They’re all volunteers, and they treat all foreign press, aid workers, and others, like myself, with the utmost support and respect.