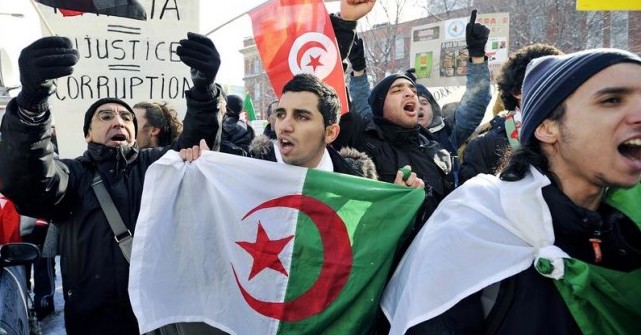 Algeria is competing to be the next Arab nation to witness a popular revolt. That is assuming soccer is a barometer of rising discontent in a region experiencing a wave of mass protests that have already toppled the leaders of Egypt, Tunisia, Libya and Yemen and sparked civil war in Syria.

In fact, there is increasingly  little doubt that soccer, a historic nucleus of protest in Algeria, is signaling that popular discontent could again spill into the streets of Algiers and other major cities. Two years ago, protesters inspired by events in Egypt and Tunisia, ultimately pulled back from the brink despite the toppling of Egyptian president Hosni Mubarak and Tunisia’s Zine El Abidine Ben Ali.

Now, in circumstances similar to Saudi Arabia, protests are mounting amid uncertainty about the future as Algeria’s ageing leadership struggles with a series of natural deaths and the effects of health problems among its remaining key members.

Soccer fans earlier this month demonstrated their disdain for the fate of 76-year old President Abdelaziz Bouteflika who is recovering from a stroke in a Paris hospital by cheering their team for days in the streets of Algiers in advance of an upcoming championship. Similarly, fans interrupted a moment of silence in a stadium to commemorate the death of a former leader by chanting “Bouteflika is next.”

Mr. Bouteflika’s illness follows the death in the past year of two former presidents, Ahmed Ben Bella and Chadli Benjedid and Ali Kafi, who served as a transition leader in the early 1990s while the military fought Islamist forces who had won elections in a brutal war that left some 100,000 people dead.

The memory of that war and the military-dominated regime’s liberal social spending temporarily took the wind out of the demonstrators’ sails and persuaded them in 2011 to shy away from staging a full-fledged revolt.

“If there is not real democratic transition, there will be an uprising … we will return to the violence of the 1990s,” warned Chafiq Mesbah, a former member of Algeria’s intelligence service and now a political analyst, earlier this month in an interview with The Associated Press.

The most recent protests are part of an upsurge in soccer-related violence in Algeria, an indicator that increased wages and government social spending is failing to compensate for frustration with the failure of the country’s gerontocracy in control since independence to share power with a younger generation, create jobs and address housing problems.

Dozens of people, including a player, were injured six months ago when supporters of Jeunesse Sportive de la Saoura (JSS) stormed the pitch during a premier league match in their home stadium in Meridja in the eastern province of Bechar against Algiers-based Union Sportive de la Médina d’El Harrach (USM). The incident followed a massive brawl between players and between fans after a Libya-Algeria Africa Cup of Nations qualifier.

Relations between the two countries have been strained since Algeria refused to support the NATO-backed popular revolt that overthrew Libyan leader Moammar Qaddafi. Algeria granted until recently refuge to Colonel Qaddafi’s wife Safiya and his daughter Aisha. One of his sons, Hannibal, was also believed to be in Algeria before leaving with the other family members for Oman..Libya apologized in November after hundreds of Libyan fans surrounded the Algerian embassy in Tripoli, ripped the Algerian emblem from the building and burnt an Algerian flag.

The protesters’ retreat into the stadiums amounted to a tacit understanding between Algerian soccer fans and security forces that football supporters could express their grievances as long as they did so within the confines of the stadiums. “Bouteflika is in love with his throne, he wants another term,” is a popular anti-government chant in stadiums.

Stadiums have long been an incubator of protest in soccer-crazy Algeria. A 2007 diplomatic cable sent by the US embassy in Algiers and disclosed by Wikileaks linked a soccer protest in the desert city of Boussaada to demonstrations in the western port city of Oran sparked by the publication of a highly contentious list of government housing recipients. The cable warned that “this kind of disturbance has become commonplace, and appears likely to remain so unless the government offers diversions other than soccer and improves the quality of life of its citizens.

Seven fans were killed in the last five years in soccer-related violence and more than 2,700 wounded, according to Algerian statistics.

Algeria’s domestic fragility is highlighted by almost daily smaller protests in towns across the country sparked by discontent over lack of water, housing, electricity, jobs and salaries. Protests have led to suspension of soccer matches. Soccer was also suspended during last year’s legislative elections.

A sense that the government may revert to strong arm tactics rather than reform if protests swell was reinforced when General Bachir Tartag was recalled from retirement in 2012 to head the Directorate for Internal Security (DSI). Gen. Tartag, who is believed to be in his sixties, made a name for himself during the civil war against the Islamists as one of Algeria’s most notorious hardliners and a brutal military commander.

The appointment positions him as a potential successor to aging Algerian spy chief Gen. Gen. Mohamed ‘Tewfik’ Mediene, widely viewed as the number two within the Algerian regime should he eventually take over from Mr. Bouteflika.