After 17 Years Trying to Visit Gaza, I Am Home 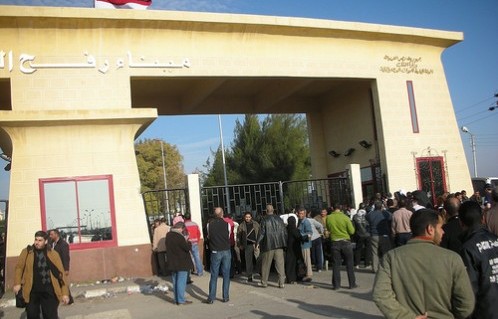 The Palestinian security officer at the Rafah border was overly polite. He wore a black uniform and walked around self-assuredly, as he instructed weary travelers on their next moves before being allowed back into Gaza. On the other side of the border, in Egypt, there was much anxiety, fear and anticipation.

‘Things will get better,’ said a Palestinian engineer from Gaza, who once studied and now works in a Swedish town south of Stockholm. What he meant was that things will get better at the border crossing, in terms of the relationship between Gaza and Egypt. Without a decisive Egyptian decision to reopen the crossing – completely – Gaza will continue to reel under the Israeli siege. Others agree, but Gazans have learned not to become too confident about political statements promising positive changes.

However, the Egypt of today belongs to an entirely different political category to the Egypt of Hosni Mubarak’s leadership. Palestinians, especially those trapped behind the shut borders in Gaza, are well aware of this. Still they are cautious. ‘Inshallah’ – God willing, they say, ‘May Allah bring good things.’

For now, things remain difficult at the border. When Egyptian border officials collect passports for examination, and return a few hours later to read aloud the names of those allowed in, a large crowd gathers around them. Tensions soon escalate to yelling, and occasional tears.

‘Go back or I will not give any his passport back,’ shouted a large Egyptian officer with some disdain. The veins on the side of his face suddenly bulked up. The crowd disbanded, only to return seconds later. The officer looked exhausted and clearly fed up. The Gaza travelers had already moved beyond the point of humiliation. They simply wanted to get from here to there, and back.

A young woman with a contorted back trotted behind her mother. Her pain was apparent on her face. ‘Yallah yamma,’ – hurry, daughter – urged the mother. ‘They might close the gate any minute.’ The girl, in her twenties, paused, closed her eyes tight, as if summoning whatever strength remained in her frail body to carry on for a few seconds longer.

The gate of the Egyptian border point was very wide, but only a small gap of a few feet was open. When it opened, early Thursday, May 19, hundreds tried to rush in at once. Large bags were tossed over people’s heads, children cried in panic, officers yelled, and a few dared to yell back. ‘Just open the gate, the big one,’ someone said. A white-haired little man, in an oversize, ancient suit, stood back and shock his head. ‘It’s a tragedy,’ he said. Soon, he too was forced to lose his civility and push against the mass of desperate humanity. Later, I saw him inside the border point, circling around nervously and intently puffing on a cigarette.

Here at the border, everyone is nervous, even those who have no reason to be. The Egyptian officers are edgy, as if their fate too is being determined somehow. Both sides know that the Gaza-Egypt border is undergoing an important transition. Egypt’s new foreign minister, Nabil al-Arabi, had already promised a breakup with the past, thus an opening of the border between his country and Gaza. There is much trust among Palestinians that the new Egypt is genuine, but also a fear that a politically vulnerable Egypt might be forced to compromise on its early stances.

But the Egyptian people seem determined to keep their government in check. Palestine is a major theme now in large protests. Hundreds of Egyptian activists were arrested, and many were wounded as they rallied near the Israeli embassy in Cairo, which was closed for few days before re-opening again. An Egyptian call to march to Gaza, in commemoration of the Palestinian Nakba of 1948 – the Day of Catastrophe – was aborted after the Egyptian army sealed much of Sinai. Tanks still dot the highway leading from Cairo to Gaza via the Sinai desert. The soldiers are very polite, though. The Egyptian driver who took me to Rafah in a very late hour seemed happiest with the revolution in his country, simply because he is now treated with respect by men in uniform. ‘Officers used to treat us with so much disrespect,’ he said with a retrospective sense of grief. ‘Now, we are like brothers.’ The driver extended his hand for an unnecessary handshake with a noticeably short solider, wearing a pair of slippers.

The sense of joy hasn’t made it to the Gaza border yet. The hope and anticipation that Gazans feel towards the changes underway in Egypt can only be understood after a degree of investigation. The distance between Cairo and Rafah is long and arduous. It will be no easy task to translate political will in the former into meaningful policy in the latter. Still, the Egyptian people are keeping up the pressure, and Palestinians in Gaza remain hopeful.

At the end, no one was turned back. Everyone made it into Gaza. The man with the very old suit was still smoking and cursing for no apparent reason. The girl with the hurt back was still in terrible pain, but also happy to be home. The Gaza-Swedish engineer had a crowd of young cousins waiting for him. In Rafah, I found myself invited to a lunch followed by Arabic coffee with many men I didn’t know, most of whom were called Mohammed. They all seemed happy.

‘So, Egypt has changed, right?’ asked one Mohammed with a knowing smile and a nod. Everyone seemed to agree, although they didn’t pinpoint exactly how that change has affected Gaza so far. Palestinians in Gaza survive largely because of the 500 or so tunnels that connect the impoverished, besieged Strip to Egypt. Now, they feed on hope and cheap cigarettes, much of it also coming from Egypt.

‘Ramzy Baroud,’ called out an older officer loudly. ‘Welcome home, son,’ he said, as he handed me my passport and waved me in. No words could possibly have been sweeter at that moment.

After seventeen years of constant attempts to visit Gaza again, I am finally here.