A View from the Street in Cairo: Fear, and Hope 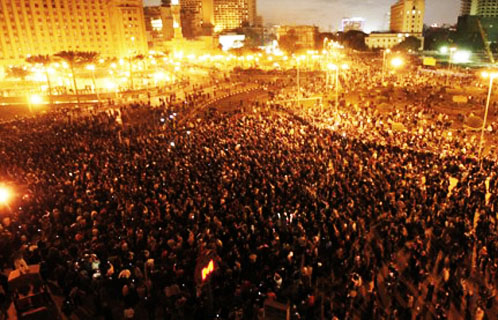 As massive protests unfold throughout the Middle East, all eyes are on Egypt, which has gone into it’s fifth day of massive protests against the Mubarak-led government. Some of the suhaibwebb.com team is currently in Cairo. One of them shared the following account:

“There is a curfew in effect since 4pm on Saturday, and most people are very scared. Most neighborhoods have set up their own neighborhood watch, with a number of men from every apartment building on the street protecting their homes and families. Many stores, hospitals, and police stations have been raided, and people are in a frenzy to gather and stock up on essential supplies. I was on the street shortly before the curfew went into effect, in a last minute attempt to buy some groceries and canned food, and every shop owner had a baton or other weapon to defend from any looting. Every store I went to was completely out of eggs, bread, and sugar or had already closed for fear of being robbed. Gas stations shut down as well as people were in a frenzy to fill up in case they had to flee out of town. Many cities have tanks and military personnel around to protect local neighborhoods and shopping districts.

Please make du`a’ for everyone here. One beautiful thing is that the masjids are full and are being used as communication centers. We had a community briefing at Maghrib where we discussed security and emergency plans. Everyone is coming together and getting to know each other.

Just to clarify, the majority of protesters are peaceful and calling for nonviolence and refrain from torching buildings. Accusations that police have been looting and torching buildings show that the civilians are not the main culprits behind the chaos. The government has placed plain clothed police to wreak havoc and create instability so it shows that his leadership is needed during these tough times. Apparently Mubarak asked the uniformed police to stay home, hence the military is taking care of the policing, though they are limited and spread thin.

Although those of you far from the chaos are probably very happy and excited, it is important to realize the seriousness of the situation. Just the fear of not having access to food and water is enough to make most people very worried. In addition, the fear of theft of one’s car, home, and store adds to the uncertainty of what will happen tomorrow. There is no insurance here, so if someone loses something, it’s gone for good. The idea of peace and security is something we take for granted, take a minute and thank Allah for it. Allah commands the Arabs of Mecca to worship Him in Surat Quraysh, and reminds them that He is their Lord who feeds them and secures them from fear (of being robbed during their journeys). May Allah grant peace and security to the people of Egypt.”

Many of the SuhaibWebb.com team and their family members are currently in Egypt. We ask everyone to please keep the safety of the people of Egypt in your du`a’ (prayers)