A Starbucks, A Golf Course and a Pub: The ‘Guantanamo Zoo’ 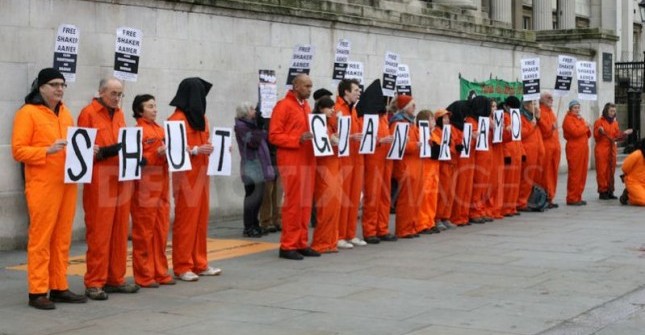 The Guantanamo Bay prison is a glaring attestation to the state of political indecision which the United States has experienced since President Barack Obama’s first day in office. While his second term is unlikely to deliver much of the ‘change’ he had so industriously promised, skeletal men continue to sink into utter despair at the American gulag at the Guantanamo Bay Naval Base in Cuba.

Many, if not most of the 166 people currently imprisoned in Guantanamo are innocent. This is so even by the standards of the US government as it continues to violate the Geneva Convictions and US laws regarding prisoners’ rights during armed conflicts. In fact, 86 of the Guantanamo detainees have been designated for release, but lack of resolve on the part of the administration, obstacles by Congress and a general lack of interest in the plight of these men, has left Guantanamo a human rights abomination that is still open for business eleven years later.

In a Speech on August 1, 2007, Obama, then a senator, laid out a moral framework for his views on inhumane travesty. “In the dark halls of Abu Ghraib and the detention cells of Guantanamo, we have compromised our most precious values,” he said. His conduct of later years as president however didn’t reflect an unyielding desire to break away from the legacy of his predecessor.

The administration of former President George W. Bush had capitalized on the fear and anger produced by the terrorist attacks of September 11, 2011, instituting the type of injurious policies that not only undermined the US constitution, but also furnished a platform for global lawlessness. Never before had international law been as devalued as it was during the Bush years. Even men who were entrusted with insuring the upholding of the law, worked diligently to undermine it. Former attorney-general Alberto Gonzales, a personal friend of Bush, mastered this art of legal manipulation in a way that allowed his bosses to adorn their gratuitous actions with the air of legitimacy. Guantanamo was his ultimate masterpiece.

But Obama appeared adamant in ending the Guantanamo era, although it merely exemplified US official detestation of human rights and international law that guarded them, as demonstrated from Abu Ghraib in Iraq to Bagram in Afghanistan.

On January 22, 2009, the newly inaugurated Obama, armed with a significant popular mandate, signed an executive order to close the Guantanamo Bay Detention Facility within one year. The wording then reflected the new impetus to reclaim the country’s squandered values, or so it seemed. Today, however, they ring with familiar hollowness, as many of Obama’s many other pledges do. His action then was meant to “restore the standards of due process and the core constitutional values that have made this country great even in the midst of war, even in dealing with terrorism.” In actuality, Obama’s truism was an attempt to catch up with the expectations of a frustrated public and a Supreme Court ruling (Hamdan v. Rumsfeld) on June 29, 2006, which entitled the Guantanamo detainees to protection under Common Article 3 of the Geneva Convention.

It goes without saying that the quest to shut the Guantanamo prison down would have been dropped completely from media or government calculations if it were not for the indefatigable efforts of many human rights campaigners who continue to demand the government to do the right thing. Obama, at least for a while, gave every sign that real action was underway. On December 15, 2009, he sought to replace Guantanamo with another maximum security prison in Thompson, Illinois, and to transfer the prisoners into the main land where due process would then apply.

Congress, however, empowered by the rise of an extremist right-wing outfit, the Tea Party, seemed in no mood to allow for any radical shift away from Bush’s abhorrent policies. As his first term in office proved, Obama was not ready to use the political capital necessary to shut Guantanamo down.

A crucial Congressional verdict arrived on May 19, 2010, blocking any efforts aimed at redefining the status of Guantanamo detainees or to shut the prison down. The president quickly capitulated, especially as public interest waned and pressure on Obama to deliver on his early promises slowly evaporated. On March 7, 2011, Obama re-instituted military tribunals in Guantanamo. Over the course of two years, any hope for justice disappeared as if no executive order was ever signed in the first place. On January 28, 2013, the very office assigned to the job of closing the Guantanamo prison was itself shut down.

Writing in the Huffington Post, under the title “Obama’s Guantanamo Is Never Going To Close, So Everyone Might As Well Get Comfortable”, Ryan J. Reilly filed, on Feb 16 a most revealing exposé from the Guantanamo Bay Naval Base. “As Obama’s second term begins, Guantanamo seems to be putting down roots,” he wrote. “Indeed, parts of the naval base have taken on the appearance of a new beachside housing development. Hundreds of homes are currently under construction in neighborhoods with names like Iguana Terrace and Marina Point, to house the growing population of military personnel, civilian contractors and their families, which currently stands at approximately 5,000.”

An industry is now being built at the expense of those mostly innocent men, as if they are animals in a zoo. Reilly reported: “The base features a Starbucks, a Subway, a McDonald’s, a KFC/Taco Bell, a supermarket, a golf course, a restaurant serving Jamaican jerk chicken and an Irish pub. A gift shop sells stuffed iguanas and T-shirts emblazoned with Guantanamo Bay slogans like ‘Close, But No Cigar.’”

But no text can truly describe the agony of these men in Guantanamo, many of them were held for over a decade without being charged. As of April 19, 63 of these men have been on a hunger strike, some since early February. For them, it is either dignity or death. One is Samir Naji al-Hasan Moqbel, a Yemeni prisoner who has suffered untold hardship since 2002. On April 14, he wrote an article that was published in the New York Times, entitled: “Gitmo Is Killing Me.”

“Last month, on March 15, I was sick in the prison hospital and refused to be fed. A team from the E.R.F. (Extreme Reaction Force), a squad of eight military police officers in riot gear, burst in. They tied my hands and feet to the bed. They forcibly inserted an IV into my hand. I spent 26 hours in this state, tied to the bed. During this time I was not permitted to go to the toilet. They inserted a catheter, which was painful, degrading and unnecessary. I was not even permitted to pray.

“During one force-feeding the nurse pushed the tube about 18 inches into my stomach, hurting me more than usual, because she was doing things so hastily. I called the interpreter to ask the doctor if the procedure was being done correctly or not. It was so painful that I begged them to stop feeding me. The nurse refused to stop feeding me. As they were finishing, some of the ‘food’ spilled on my clothes. I asked them to change my clothes, but the guard refused to allow me to hold on to this last shred of my dignity.”

On April 12 Guantanamo prison authorities had broken down a prisoners’ protest by force, isolating them all into individual cells. The number of the hunger strikers is growing by the day.

“I just hope that because of the pain we are suffering, the eyes of the world will once again look to Guantanamo before it is too late,” wrote Moqbel, who is now 35-years-old and his only hope is to go back to Yemen and start a family.