A Message for the Region: Non-violence works 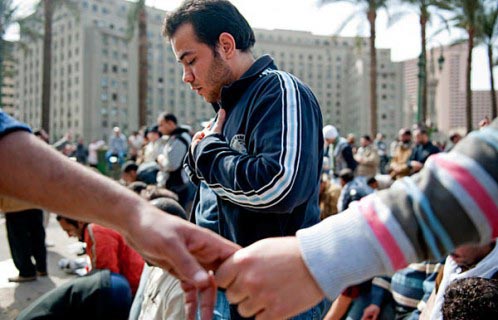 The astonishing breakthrough in Egypt, when President Hosni Mubarak stepped down after weeks of protests, has rightly galvanised attention around the world. Yet as usual, there has been little commentary from the non-violence standpoint. While US President Barack Obama at least used the words “non-violence” in his recent congratulatory speech, we should realise that there is much more to the potential of non-violence than just protesting without weapons.

To miss this point may be to miss the true significance of these events – not just for Egypt but also for the world.

According to a careful study directed by Adrian Karatnycky for the International Center on Nonviolent Conflict, which educates the global public, activists and organisers about non-violence, in 67 recent transitions from authoritarian regimes to democracy the uprisings were twice as likely to result in freedom and democracy if they were carried out non-violently.

“Many transitions from authoritarian rule do not lead to freedom,” the report points out. When non-violence is adhered to, though, the chances of such a happy outcome greatly improve.

This is what happened in Egypt. It definitely included tense and challenging moments when individuals rose to the occasion and exhibited a deeper kind of courage and commitment. When police and demonstrators clashed outside a mosque in Alexandria, The New York Times reported:

“The crowd chanted, ’salmiya, salmiya’ which means ‘peaceful’. Several demonstrators walked with their arms raised up to the green truck where a helmeted officer was firing tear gas canisters not into the air but straight into protesters’ bodies. A man in a striped shirt came forward and kneeled in front of the truck. The police massed behind their shields, clutching their batons, but did not strike.” Instead, they retreated, backing slowly to their transport vehicles, and with that the fight had ended.

Cairene citizens have repeated the dynamic that was seen in Serbia’s Otpor (resistance) revolution in 2000, where non-violent protests led to rapid victory and the overthrow of President Slobodan Milosevic. But as history shows, this kind of ”non-violence” is a mere beginning. It could be a prelude to the kind of chaos that oppressive forces could take advantage of, unless the crowds from Tahrir Square build upon the courage they have shown, and cling to the kind of unity demonstrated during the protests when Christians and Muslims, as well as women and men, came to the square.

Now, they must go from protesting to promoting a concrete, positive plan for Egypt’s future. To do this, they will have to tap into the full power of non-violence. As Gandhi said, this power is engaged when you “love your enemies” – and add constructive work for worthwhile causes to resisting injustice.

Fortunately this is possible, partly because the protests did not just represent a mob mentality in which people come together in the streets but have no direction or goals. Far from being touched off only by the similar uprising in Tunis, some Egyptian youth had been planning this uprising for as much as three years, and had been organising strikes and protests through blogs and Facebook. These Egyptian activists connected with veterans of the Serbian Otpor revolution, who founded the Serbia-based Center for Applied NonViolent Action and Strategies precisely to communicate “best practices” of non-violent struggle.

In other words, there is a long-standing tradition of non-violence that came alive in Cairo. Egyptians can build on that tradition. And activists outside of Egypt can help.

Historians of non-violent movements have shown that non-violent insurrection cannot be imported from outside. But when homegrown movements do not get any support from the international community, they rarely succeed. This support was in fact forthcoming, as we have seen. Now, trainers and consultants on non-violence can help in democracy building, which goes hand-in-hand with non-violence.

Those of us who have contacts in the region should encourage them to promote “crash courses” in the full potential of non-violence, including its potential to guide the transition of power to a more stable order. The protestors showed courage and determination. More importantly, they had the sense to back off from their early expressions of raw anger and violence. Now they can turn to the less dramatic but more durable work of building a better Egypt, with help from their partners in the international community.

Michael Nagler is Professor Emeritus at University of California, Berkeley, Founder of the Metta Center for Nonviolence, and author of the award-winning book, The Search for a Nonviolent Future.