If you ever had a burning desire to see the American-Israeli alliance shine, there wasn't a better place to be than Jerusalem last week. 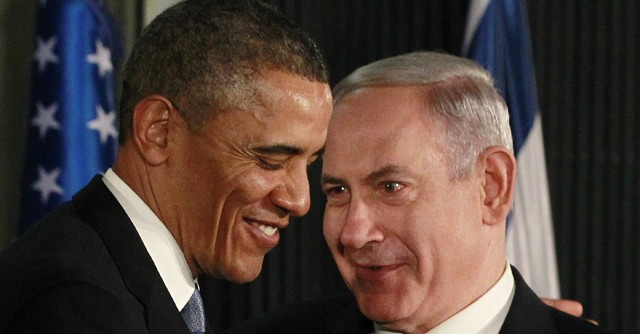 Spending 72 hours there, on the trail of President Obama’s tour through Israel/Palestine, was more than enough time to appreciate the enormous work ahead of those wishing to shift policy on the conflict in the U.S. Those three days were full of symbolic gestures that testified to the rock-solid U.S.-Israeli alliance—gestures that obscured the dispiriting reality for Palestinians forced to live under the grinding system of control Israel has imposed on them.

Ben-Gurion Airport on day one of Obama’s tour was ground zero for seeing the alliance up close and personal. You couldn’t walk around the place without seeing American and Israeli flags flying together. An Israeli military band blared out the sounds of Hatikvah, the Israeli national anthem, and the Star Spangled Banner. That band also played out a song, “Jerusalem of Gold,” which celebrates the so-called reunification of Jerusalem, a result of the capture of the holy city by Israeli forces following the 1967 war. Nobody, including the American officials gathered there, batted an eye, though.

Debbie Wasserman Schultz, the Florida Congresswoman who as chair of the Democratic National Committee helped lead Obama’s Jewish outreach during the last presidential election, walked alongside Congressman Eliot Engel and greeted the Israeli officials lined up. President Obama did the same, and even shook the hand of Naftali Bennett, the new Israeli cabinet official who wants to annex Area C and further solidify Israeli apartheid.

At that exact moment, it seemed as if nothing could shake the decades-old American posture towards Israel. If the rise of Bennett and other racist, right-wing officials determined to colonize the West Bank doesn’t shake that posture, what can?

The next two days of Obama’s jaunt through Israel/Palestine were full of other depressing moments.

There was the press conference where Obama fawned over Israeli Prime Minister Benjamin Netanyahu, repeatedly referring to him as “Bibi.”

There was Obama paying homage to Zionist icon Theodor Herzl.

And yes, the much-heralded Obama speech to Israeli youth was the icing on the cake of the tour that showed the world how strong America’s ties to Israel were.

For a few brief moments, Obama spoke the truth about the situation that Palestinians were living under. But they were hollow words, given the fact that it is Obama, on the same trip, who announced the extension well into the future of American military aid to Israel. That speech to Israeli youth, as other analysts have observed, also saw Obama affirm the Zionist narrative of Jewish redemption in the land of Israel, with no mention of how that “redemption” was carried out through the ethnic cleansing of 750,000 Palestinians who were never allowed to return to their land.

The Jerusalem Convention Center speech should be remembered as the moment where the U.S. president promised unconditional support for Israel no matter what it does; more colonies, more apartheid, more war crimes will be funded by America, no questions asked.

On the other side of the ugly separation wall, the story wasn’t much different. There, a small group of protesters in Ramallah sought to penetrate through the careful choreography of the Obama trip by yelling for the president to go home. But they were stopped on a march by walls and walls of Palestinian Authority (PA) security forces. The Western-trained and financed forces were there to protect the Muqata as the meaningless Obama press conference with PA President Mahmoud Abbas carried on.

The Obama visit to Ramallah was meant to shore up Abbas’ position as the true and legitimate Palestinian leader, no matter what actual people on the ground think. That shoring up is fundamentally about protecting Israel from the wrath of Palestinians who first have to deal with a leadership primarily interested in their self-preservation, rather than a true liberation struggle. The Obama administration understands the need to preserve the Oslo-initiated status quo, where the PA puts down unrest in the West Bank in exchange for Western support. That’s what the millions of dollars in aid recently released to the PA from the U.S. was all about.

This distressing reality is enough to make you want to bury your head in the sand. Day in and day out, Israel further strengthens its hold on the West Bank, and the U.S. just sits back and nods. The PA carries on with empty talk and continued lip-service to negotiations that has only got the Palestinians more settlements.

But of course, the answer is not to bury your head in the sand, though that’s the easy thing to do. It is Palestinians who suffer from the status quo every day, and they have not yet given up. It remains the responsibility of the Americans who fund the conflict, and who are the main reason why Israeli apartheid can continue to exist, to speak up and say enough.

The odds are stacked against those wishing to see a shift in American policy towards Israel. Despite those odds, though, calls for justice for Palestine should continue to ring out. Perhaps eventually, those calls can create a deafening ring that is impossible to ignore. Until then, it remains imperative to continue to at least try and expose the toxic system Israel has created, and the American support than enables that system to carry on without any costs.