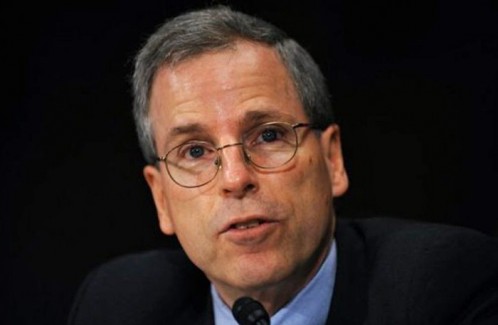 What’s the Story? The US has pulled out its ambassador to Syria, Robert Ford, because of ‘concerns for his safety’.

He’s been there for a while? Hard to believe but he’s put in a good five years.

Bad news for Syrian fruit sellers then? Ah, you’re referring to the incident last month when Mr Ford was pelted with fruit by pro-Assad supporters on one of his impromptu visits to an opposition figure.

I presume the inevitable ‘diplomatic tit-for-tat’ has taken place? Indeed, the Syrian authorities have ‘withdrawn their ambassador to the US for consultations’.

But there’s a chance that Mr Ford could well be patronising the charming coffee shops of Damascus again?  Yes, according to Mark Toner, a spokesman for the US state department, Mr Ford’s return to Syria would depend on an “assessment of Syrian regime-led incitement and the security situation on the ground”.

“We hope that the Syrian regime will end its incitement campaign against Ambassador Ford.”

He shouldn’t hold his breath then? It’ll probably be Starbucks in Washington DC for Mr Ford for a while.