As the tenth anniversary of the launching of the Iraq War approaches, I’ll be making some comments about the episode on Informed Comment, which for the years 2003-2010 intensively covered events in Iraq. A decade is long enough for some things to become clear. 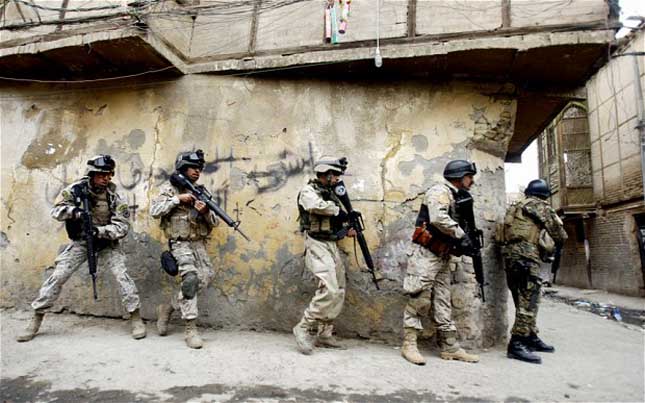 The first set of issues I want to discuss has to do with the harm the war did to the United States. Coming into 2003, the US enjoyed a great deal of sympathy and solidarity from the rest of the world (including Iran) over the al-Qaeda strikes of September 11, 2001. In the aftermath of the invasion and occupation of Iraq, the US was widely seen as an international bully. The hard-nosed realists of Washington, of course, don’t care how the country is perceived. But the poor opinion translated into an unwillingness to help out with the Iraq project, a project far too large for the United States to handle on its own. And no, El Salvador wasn’t able to help that much. Moreover, in the wake of the Civil Rights movement, public discourse in the US moved toward greater decency. Some of that achievement was lost because of war propaganda against Arabs and Muslims.

1. The US invasion and occupation of Iraq harmed the US in bringing into question its basic competency as a world leader. Almost everything the US did in Iraq was a disaster. It could not even get the stated reason for the invasion right, as it turned out there was no nuclear, biological or chemical weapons program. It looked dishonest, bumbling. It went into the war having no plans, and the plans the Bush administration made on the fly were mostly poorly thought-out and doomed to fail. It fell into search and destroy as a tactic for counter-insurgency, with the same results as it had had in Vietnam– it caused resistance to swell. Billions were wasted on reconstruction projects that assumed Iraqi know-how and equipment that they did not have, and which could not therefore be maintained even if they were completed. The US tried to run in English an Arabic-speaking country that had been deliberately isolated and cut off from the world by sanctions, without any basic understanding of Iraqi culture, customs, beliefs or ways of life. The pro-Israel Neoconservatives high in the administration blackballed (as insufficiently pro-Israel) Arabists who volunteered to go help and left the Coalition Provisional Authority blind.

Basically, the world is always looking around for a team leader and a consulting group that is known for competence and for getting good results. After World War II, the US was for the most part that country. Being the world’s team leader turns into respect, cooperation and, ultimately, confidence and investment. If the US came to most of the world today with a group project, it likely couldn’t get the time of day from them. The United States is deeply diminished in world counsels.

2. The post-World War II generation wanted to erect an international order that would forever forestall Nazi-like aggression against neighbors on the part of world powers. The Greatest Generation therefore forged a UN charter that forbade aggressive war, allowing hostilities only if a country had been attacked or if the UN Security Council designated a country a danger to world order. Iraq did not attack the US in 2002 or early 2003. The UN Security Council declined to pass a resolution calling for war on Iraq, especially after the ridiculous circus act of then Secretary of State Colin Powell before the UN laying out a self-evidently false and propagandistic case (which provoked gales of laughter in the room). The United States has irrevocably undermined that structure of international law, and any aggressor can now appeal to Bush of 2003 as a precedent. Indian politicians of the right wing Hindu Bharatiya Janata Party instanced the Bush doctrine when they wanted to go to war with Pakistan. (Wiser heads prevailed, given that Pakistan has nuclear warheads). The US has loosed a demon into the world, of the war of choice.

3. The Iraq War revived al-Qaeda’s fortunes and prolonged its life as an important actor. With the overthrow of the Taliban in 2001 and the scattering of al-Qaeda after Tora Bora, the movement was on the ropes. Internal critics lambasted Usama Bin Laden for destroying the movement by foolishly attacking the United States. But the brutal Bush occupation of Iraq and the US favoritism toward Shiites and Kurds created a Sunni Iraqi backlash. While most Sunni Iraqis were and are fairly secular-minded, a small minority gravitated to al-Qaeda as a model of resistance against the US, leading to the creation of the ‘Islamic State of Iraq’ and similar groups. The fringe of Libyans who attacked the US consulate in Benghazi last September included activists who had fought US troops in Iraq, and who otherwise would have lacked the training and motivation to hit the consulate. Iraqi al-Qaeda affiliates in turn have now fostered Jabhat al-Nusrah in northern Syria. Without the American occupation of Iraq, al-Qaeda would likely have dwindled into insignificance.

4. The US permanently lost its chance to achieve a two-state solution. The Clinton administration had come very close in 2000 to achieving a permanent solution to the conflict between the Israelis and the Palestinians. Like the Clinton economy and budget surpluses, however, the Bush administration completely undermined its predecessor’s achievement. Distracted in Iraq, Washington dropped the ball on Palestine. Permanently. It allowed the Israelis vastly to increase the number of settlers on Palestinian land grabbed illegally in 1967. It undermined the elected Palestinian government of 2006 and subsequently collaborated in an evil and creepy blockade of the civilian population of Gaza. The slogan of the Neoconservatives, that the road to peace in Jerusalem lay through Baghdad, was either profoundly dishonest or profoundly stupid on their parts. It was in any case profoundly untrue. A deep gulf has opened between the US and all the other members of the UN Security Council on Israeli policy, as well as with the European Union. The US is widely hated by the rest of the world for daily getting up in the morning and screwing over millions of Palestinians. That its bizarre malice toward the displaced and oppressed Palestinians comes on top of the catastrophe it wrought on Iraq makes it look all the more monstrous to much of the globe. It is highly unlikely that Israel can survive for more than a few decades as an Apartheid state, which is what it became while the Bush team was obsessed with Baghdad.

5. The US, which once prosecuted Japanese generals for water-boarding, and which had laws against torture and against assassination, became an international symbol of torture pornography when some of the Abu Ghraib photographs of the mistreatment of Iraqi prisoners were released. I talked to a US embassy official charged in the middle of the last decade with upbraiding Uzbekistan’s Islam Karimov for his use of torture; the diplomat knew that Abu Ghraib had pulled the rug out from under him.

6. The motives of the US in attacking Iraq were presumed by the rest of the world to be getting that country’s petroleum on the world market. That the most powerful country in the world might just fall upon any victim it chose alarmed other nations and provoked their suspicions. China all of a sudden wanted an aircraft carrier group. Those already inclined to see the US as imperialist, like Venezuela’s Hugo Chavez, were were given proof they were right. Iran’s insistence on maintaining a nuclear enrichment program, even a non-military one, certainly has to do with the deterrent effect of nuclear latency (knowing how to quickly throw together a warhead). TheBrazilian nuclear submarine program is aimed in part at protecting its natural resources from being summarily looted by Washington.

7. The long Iraq War did much more than the 9/11 attacks to promote Islamophobia and to make promoting hatred and fear of Muslims a common political tactic by American politicians, especially on the Right. The Civil Rights movement of the 1960s had for decades succeeded in stigmatizing openly racist speech in public. TV and radio personalities have even had to resign for speaking in a prejudiced way. But after all those years fighting Muslims in Iraq, the US establishment has decided that it is all right to bring back the language of bias when speaking of Arabs and Muslims, thus debasing our American values, which proclaim that all men are created equal and all are endowed by their Creators with certain inalienable rights.

8. The Iraq War allowed Iran to rise as a regional power, so that a Tehran-Baghdad-Damascus-Beirut political axis was created. This alignment is visible in the Syria conflict, with Iran and its allies attempting to prop up Syria’s ruling elite (which adheres to the Alawi sect of Shiite Islam). This Iranian geopolitical dominance exacerbated sectarian conflict throughout the region, with militant Sunnis striking back at ascendant Shiites, contributing to a destabilization of the region.

9. The financial cost of the Iraq War to the US will rise over time into the trillions. This cost derives in large part from the need to treat the thousands of Iraq War veterans who were injured by roadside bombs, and who have damaged limbs, spines and/or brains. Some 33,000 vets were injured seriously enough to go to hospital, a number seldom mentioned when the over 4,000 soldiers killed are eulogized. (Dead and wounded contractors are also seldom mentioned).

10. If the Iraqi government does ever manage to get its act together enough to produce substantially more petroleum, that will hurt green energy by lowering the cost of hydrocarbons, and so will contribute to ever more global warming. The US would have been much better off with high oil prices, encouraging consumers to move to electric vehicles powered by solar panels and wind. The oil men who plotted out the invasion of Iraq were attempting to put the price of oil back down to $14 a barrel, according to Rupert Murdoch. They failed, but whatever success they had is bad for the world.