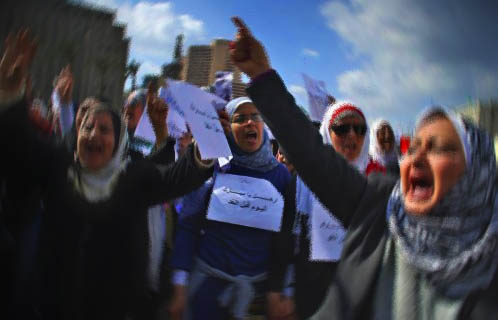 Almost universally, everyone I’ve spoken to who isn’t in Egypt over the past few days has expressed a concern that the revolutionary fervor here is waning. I am happy to report that isn’t what I’ve been witnessing. But a few new developments both here and internationally are worth discussing.

News that economic activity was returning to Cairo appeared to suggest that the protesters had begun to grow weary. That isn’t what I’ve observed. Yesterday, more people participated in the Tahrir demonstration than at any other time in the past 16 days. What surprised me was the number of first-time demonstrators who showed up. I don’t doubt that the Ghonim interview touched a lot of people and encouraged them to participate (and many hope he’ll lead the movement). But, I also think that increased food and cash security alleviated the sense of siege that persisted for much of last week. For instance, food and water were very difficult to come by in downtown Cairo on Friday and Saturday. Yesterday, I was offered food and drinks at pretty short and regular intervals. I think that that security positively impacted energy levels and turnout.

It bears remembering that millions of Caireans subsist on a day-to-day basis. These people are very vulnerable in a frozen economy and their sacrifice has been disproportionately large because of that. This is their revolution, and they’re present in very large numbers, but they need to survive. The economic activity they engage in is qualitatively and quantitatively different from the kinds of heavyweight activity that the country’s oligarchs engage in; theirs is a “shadow” economy. So I’m not too worried that the NDP elite will recover from the stock market’s extreme devaluation or from short-term drops in foreign direct investment because shops are reopening.

Finally, I worried that very acute economic suffering would cause segments of society – some people only have access to state media – to turn on the demonstrators. Renewed economic activity has helped to prevent that conflict from materializing. There are reports of discontent in areas where tourism is an economic mainstay, but that’s unavoidable.

What also seems to be unavoidable is the recent (a week old?) linkage that’s arisen between the labor rights movement and the democracy movement. I don’t know enough to comment about the unions here, but they’ve struggled a great deal since the IMF 1990s when crony neoliberal privatization dismantled the Nasserist state. Today, thousands of workers are striking around the country; Al Jazeera reports that there are six thousand striking workers in Cairo alone. Their work stoppages are further weakening the state’s coercive apparatus.

The short period of being pleasantly surprised by the statements coming from the White House has ended. What I’m having trouble figuring out isn’t “What happened?” but “Why did anyone bother making principled statements to begin with?” Washington’s squishy fangs and slope-headedness on Suleiman and torture in general did allow the New York Times to list Israel, Jordan, Saudi Arabia and the UAE as Mubarak’s cohorts in tyranny. So that’s good, I guess.

Besides being nauseating, Washington’s serial vacillation has exposed demonstrators to more danger. Where some country in the Great Liberal West may have struck a strongly independent and pro-democracy chord – America’s superficiality has served to co-opt them all. Today, it appears that the demonstrators are largely on their own. I think most of them have known that all along.

In any case, the most hopeful signals are being issued by Germany, which is offering to “treat” Mubarak for an indefinite period of time. It’s hard not to notice the echoes of Farouk here; the demonstrators have been comparing Mubarak to him for the past two weeks (Sadat is highly regarded by some for his performance in 1973). Mubarak has managed to somersault backwards over Sadat and Nasser to squat in Farouk’s decadence – a serious achievement. I think that will be his legacy.