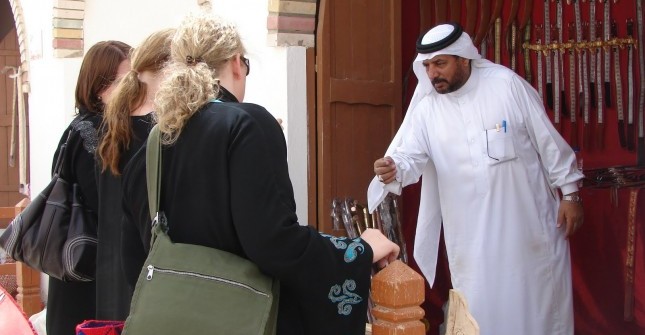 While I was in Jeddah last week I had a pleasant chat with a guy called Mourad. I was facilitating a workshop at a government organisation, and Mourad was sent to collect me from the hotel.

The conversation didn’t start well. He told me that he didn’t speak much English. After I said a few things in my usual broken Arabic his eyes widened and he laughed with amazement that I spoke in his native language at all. Then I asked him his name, again in Arabic. When he told me I said “ah – you are a caliph!” He laughed even more when he realised that I had connected his name with the Ottoman rulers who also bore the name Mourad. “How do you know this?”, he asked. “Ana talib”, I replied – I’m a student. And it’s true – I’ve been studying the history of the Middle East for a long time.

Things went famously from there. His English turned out to be far better than my Arabic, so we talked in my language. He had studied English at high school from a British teacher. His vocabulary was OK, he said, but he struggled with grammar – the same problem I have with Arabic. He was desperate to learn more English, but where he worked he rarely had the chance to speak to someone like me – everyone around him spoke Arabic.

Mourad is in his twenties – he never went to university, but he’s hungry for knowledge. He sees proficiency in English as a passport to greater things. What’s more, in contrast to the perceived wisdom that government workers are content with working six hours a day and doing little in that time, he has another job in the evening – again as a driver.

The point of this tale was that the little Arabic I possess went a long way towards opening up an interesting conversation. The fact that he was amazed that I spoke any Arabic at all was also telling.

Which leads me to the proceedings of a conference of Arab academics about the influence of non-Arabic speakers on the Arabic language in the Gulf countries (thanks go to Crossroads Arabia for putting me on to this story).

Here’s an extract from the Saudi Gazette’s report on the conference:

One of the academics, Latifa Al-Najjar, professor at the United Arab Emirates University, said the presence of non-Arab speaking labor in the GCC countries contributed, along with the use of colloquial Arabic in audio and video media, to the creation of a distorted Arabic language, negatively affecting the process of acquiring knowledge of standard Arabic.

“So, a possible solution would be to make Arabic language a requirement, at various scales, for foreign labor coming to work here, taking into account their type and level of jobs.

“It would be one of the most important mechanisms to consolidating the status of Arabic language and protecting it in these countries.”

She said GCC countries are still ignoring the fact that it is their right to impose such conditions on foreign labor.

The other academic, Hasna Al-Guenaier, professor at King Saud University in Riyadh, said the GCC countries have workers from up to 120 nationalities who speak around 50 different languages. They run over 600 schools, of which 200 are Indian.

She said: “The continuous increase of non-Arab labor in GCC countries is posing serious risks to the Arab identity, the demographic structure and the security and stability of these countries.

“We are seeing at present one sign of these risks, marginalizing the language of these countries, Arabic, in day-to-day dealings.”

She called on the authorities to implement the necessary laws to make all transactions in government departments and agencies in Arabic language without delay, otherwise the language of the Holy Qur’an will be gradually abandoned, leading eventually to abandonment of the Arab and Islamic identity.

At first glance you would have to say “too late, brothers and sisters – the damage is already done”. What’s more, colloquial Arabic has co-existed alongside the classical language of the Holy Quran for centuries. So you could argue that the increased subversion of colloquial variants with alien words and phrases is just another linguistic evolution that has been taking place ever since the Prophet received the words of the Quran fifteen centuries ago.

It would also be good to remember that this is not a one-way street. The English language has many words with Arabic roots and is assimilating new ones every day – jihad and fatwa are the obvious recent additions, but the language of Arabic cuisine has also spread around the world as Lebanese dishes become common currency – think of tabouleh and falafel.

I suspect that these academics realise that they’re flying a lonely kite – especially in the Emirates, where the national population is vastly outnumbered by expatriates, and where you would be lucky to find a western “knowledge worker” who has an Arabic vocabulary of more than ten words.

But they do have a point. I know a good many Bahrainis and some Saudis who only speak English at home. And text language is often an awkward amalgam of English and Arabic. Though I question the linkage with Islam as a key problem – after all there are many non-Muslim Arabic speakers in the Middle East – I’m with them in the sense that language is a heritage, and underpins cultural homogeneity. After all, there are many British English speakers who regard American variants with the same lack of enthusiasm that they reserve for the grey squirrel – another import from the Americas. And the French have an entire academy devoted towards protecting their tongue from Anglo-Saxon pollutants.

But leaving aside the practicality of insisting that a fund manager from London or New York should be able to find their way around their temporary home in Arabic, requiring expatriates to speak some level of the local language could have some intriguing consequences.

Saudi Arabia, for example, is making strenuous efforts to reduce its expatriate population. Giving stronger preference to Arabic speakers – as opposed to or in addition to the current regulations related to quotas of foreigners – would change the national demographic considerably. Not only would you find an increase in workers from the Arab world, but you would probably create thousands of new jobs in the Arabic language schools that would spring up as a consequence of workers already there scrambling to brush up their Arabic.

Clearly the devil would be in the detail. Professor Latifa made the point that there would have to be a scale of proficiency depending on the occupation of the worker. If it was mandatory that every construction worker from Bangladesh or China spoke fluent Arabic, the construction industry would seize up through lack of staff.

Would the presence of more non-local Arabic speakers create a more homogenous society in countries like Saudi Arabia, the UAE and Qatar? I’m not sure.

Right now there are more than a million Egyptians working in the GCC. My experience is that they are tenacious in holding on to their jobs. In circumstances when they are required to share their knowledge for the benefit of locals who might seek to replace them, they have the reputation of being slow in coming forward. As well they might. After all, the Egyptian economy is not exactly flourishing. Life in the GCC is stable, salaries are good, and Cairo is only a short hop from any of the GCC countries.

So if I was a Saudi or Emirati policy maker, I would thinking carefully whether I really wanted to expand my population of “other Arab” guest workers – for two reasons.

First because for an Egyptian, Jordanian, Yemeni or Palestinian, the host country feels much more like home than it does for a Brit, an Indian or a Filipino. Therefore all the more incentive to settle for the longest time, even if that means they are blocking advancement of the local population.

The second reason is that if there is a future threat to the social order in the GCC countries, it could well come from Arabs who feel that they have contributed for a lifetime to the prosperity of their host country, and yet are denied the rights, subsidies and hand-outs enjoyed by the locals with whom they work side-by-side. The desire for “justice” might be expressed in religious terms, but fundamentally it will have its roots in economic inequity.

And what would the GCC countries lose if it became more difficult for non-Arabs (and by extension, non-Muslims) to enter and work in those countries? For the past fifty years those countries have relied heavily on foreign expertise. Perhaps less so now because more and more nationals are studying abroad and picking up skills that were unavailable to them at home.

But not every foreign worker will have the patience or desire to learn Arabic, and although there are many highly skilled Arab doctors, scientists and engineers who could fill the gap left by departing Americans and Europeans, there would surely be a loss in terms of reduced cross-fertilisation of ideas, innovation and invention. After all, a more homogenous society is not always a more creative one. Britain and America have for centuries benefitted from the catalyst of immigration – regardless of race or religion.

Much as I sympathise with the desire of the academics to preserve their language, I would suggest that persuasion will work better than compulsion. The GCC countries aspire to become knowledge economies. They will not do that by shutting the door on foreign influence and ideas.

That was not the way of the Muslim scholars of Bayt Al Hikma (the House of Wisdom) in the golden age of Islamic learning, who took it upon themselves to translate all the knowledge of the world and in the process preserved much of the learning that underpins what we think of as western civilisation.

Nor should it be the way in our era, when a globalised House of Wisdom can be found anywhere and everywhere, but where real advances are made when people meet and interact with people in real space.