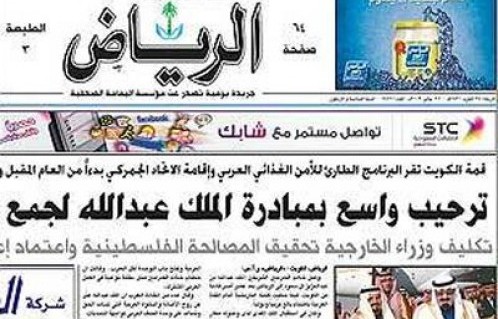 With a series of new Royal Decrees, Saudi Arabia has taken an amazing step backward from free speech. Directly and indirectly, the newly-amended Press & Publications Law now criminalizes, well, just about anything. Sedition? Check. Lèse majesté? Check. ‘Anything affecting the reputation or dignity’ of anyone? Check. ‘Propagating division between citizens? Check.

That doesn’t leave much to talk about, does it? Maybe the weather is uncontroversial. But if the weather causes floods and people die as a result, this law would prevent talking about who is responsible for the lack of preparation: that would clearly be ‘divisive’. How about sports? No… criticizing a goalie’s poor performance will surely annoy him, his friends, family, and supporters.

Saudi Gazette has the more complete coverage of the announcement made through the Saudi Press Agency. It notes that the law pertains not just to Saudi newspapers, but also to online media, including those of Saudis writing outside the Kingdom. This is truly both breathtaking in its scope and its stupidity. One does not protect the dignity of people by calling in the cudgel of law, with its power to confiscate newspapers, close their offices, fine them heavily, and banning future writings. All that does is push criticism underground while falsely creating a sense that everything is quiet.

As I said in an earlier piece, Arab governments have already lost the battle to control media, both professional and personal. They cannot put the genie of the Internet back in the bottle, nor close it down. The sole redeeming factor in this law is that judgments will be made by new, professional committees. That’s pretty thin gruel. Who will comprise these committees? How will they interpret the law, which is sweepingly overbroad? It certainly appears that a veil of silence is about to descend on the people and media of Saudi Arabia.

RIYADH: A number of Royal Decrees were issued Friday containing amendments to the Press and Publications Law of Nov. 2000, addressing violations in the content of published materials, the authorities tasked with investigating and ruling on offenses, and the penalties they incur. The first of the five amendments concerns Article 9 of the law, with the text now reading: “All officials in printed materials will heed to objective and constructive criticism in the public interest based on facts and correct testimonies, and are barred from publishing in any form whatsoever the following:

1 – Anything that violates Islamic Shariah rulings or laws in force.

2 – Anything calling for breaches of the security of the country or its public law, or anything that serves foreign interests in conflict with national interests.

3 – Anything affecting the reputation or dignity of, or slandering or personally insulting, the Grand Mufti of the Kingdom or members of the Board of Senior Ulema, or dignitaries of the state or any of its employees, or any person of ordinary standing or any legal person.

4 – Inciting and propagating division between citizens.

5 – Promoting or inciting to crime.

6 – Anything damaging to the country’s public affairs.

7 – Details of investigations or trials without obtaining permission from the legally authorized authority.” The second amendment made in the Royal Decrees concerns Article 36, which now reads: “The Ministry may – according to need – remove any publication without compensation, if it is found to contain anything barred from publication by Article 9 of the law.”