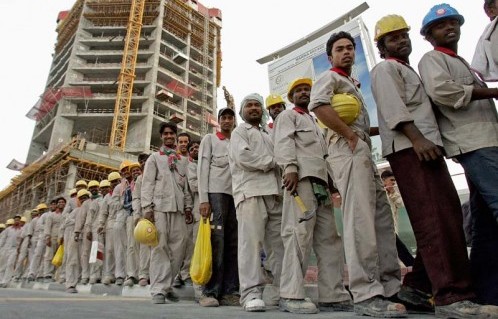 A Gulf newspaper offered prominent coverage of a largely ignored issue in this region — the mistreatment of domestic staff. On its front page, Abu Dhabi’s The National reported:

The UAE has voted for a new international convention that guarantees a lengthy list of rights to domestic staff. They include clearly defined conditions of employment before work begins, agency fees paid by employers and not deducted from staff’s wages, salary payment in cash at least once a month, at least one day off a week, and rights to freedom of association and collective bargaining.

The vote occurred at the International Trade Union Confederation (ITUC) meeting in Geneva. Delegates from the UAE, Qatar and Saudi Arabia voted in favor of the convention guaranteeing rights for domestic workers.

The article noted that ITUC recently singled out Saudi Arabia, Qatar and the UAE for criticism of their treatment of maids and nannies.

The decision to prominently display this article on the front page is laudable. The mistreatment of workers — many of whom work 18 hours a day and without any days off — is discussed here only in hushed tones. To treat poor foreign workers in this manner is quite simply a violation of human rights.

The newspaper’s actions provide a public service for the Gulf states. The mistreatment of workers is something that needs to be addressed publicly. I hope they — and other Gulf media outlets — continue to spotlight this issue.