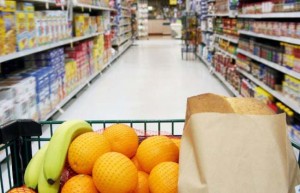 Quite properly, the UAE insists that products sold to consumers here are labelled in Arabic – the national language. However, once again, there is trouble in paradise. The Arabic labelling requirements are minimal – the product name, brand name, ingredients and product weight are all that appear to be mandated by the announcement made back in 2008 (which I posted about at the time). Although retailers whinged, the regulation is pretty light compared to elsewhere in the world and, I would argue, does little to help raising awareness among Arabic speaking consumers regarding the food they eat and what’s in it.

Another requirement of that regulation is that the affixed Arabic label should NOT cover any of the original language text.

This stipulation is patently not being adhered to – retailers and distributors are constantly handling goods where the Arabic language label does indeed cover part of the original language text. Which is why I found myself the highly unwilling purchaser last night of a pot of Hampshire Sour Cream that did not come, as I had stupidly assumed, from the English county of Hampshire but was, in fact, a brand of American food conglomerate Kraft. The country of origin was covered by the Arabic sticker. I was mildly annoyed, as I consciously avoid using foods from US producers.

It’s a rich hodge-podge, a basic regulation that I would argue does not properly serve the Arabic speaking population with full food information and that has been implemented at best sloppily (and somewhat grudgingly, apparently, if you read my 2008 post linked above!) by the companies being asked to conform to a food safety and information requirement. It’s odd, when we can see legislation rolled out here that is no less than draconian, when this piece of regulation – affecting us all – remains implemented so very sloppily and to such a basic standard. It’s been two years since the regulation came into force. It’s not as if retailers need time to comply.

The reason, I would remind you, that we have such a thriving IT industry in Dubai is that it was here, uniquely, that IP legislation was not only enforced, but enforced on such a scale, with computers confiscated from offending companies and hauled away in flat back trucks, that companies like Microsoft felt able to come here and open up shop. Remember the ruling that walking on the grassy reservations or roundabouts would result in deportation? When Dubai really wants to enforce legislation, by golly it goes for it. But for some reason this one is being half-heartedly applied. So expats and the bi-lingual lose access to product information that bodies like the EU have decided we should really have a right to view. And Arabic-only speakers don’t get access to anything beyond the most basic information – information that wouldn’t satisfy any well-informed consumer let alone EU or US regulations.

The requirements and enforcement of the UAE food labelling regulation as it stands serves us all badly.

Published with permission by Alexander McNabb, and Fake Plastic Souks