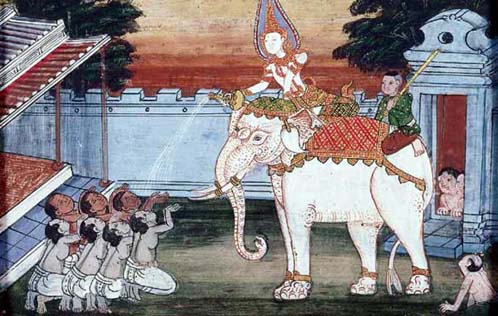 A white elephant – any relation with Wafi purely coincidental. 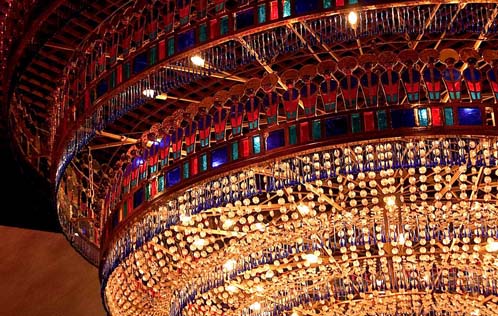 A beautiful chandelier at W 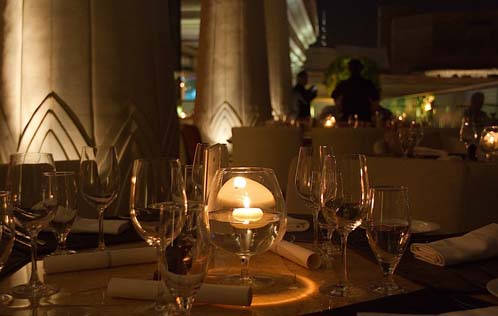 Atmospheric lighting at W, at Wafi 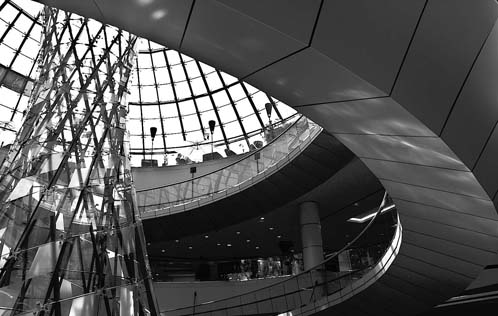 Architecture to be seen 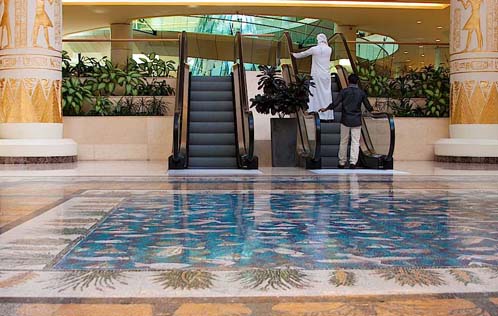 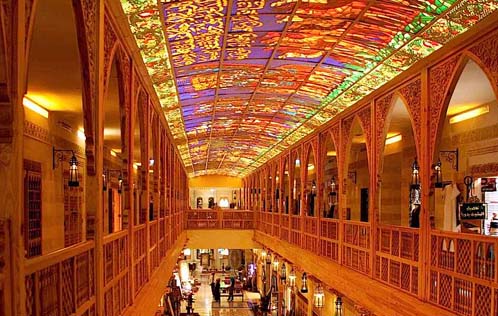 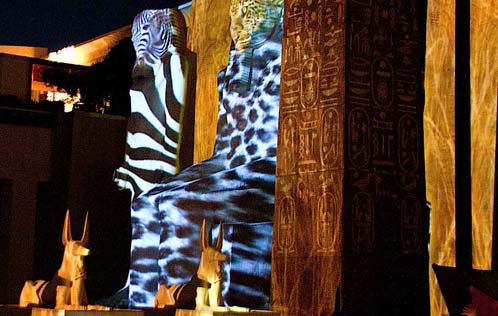 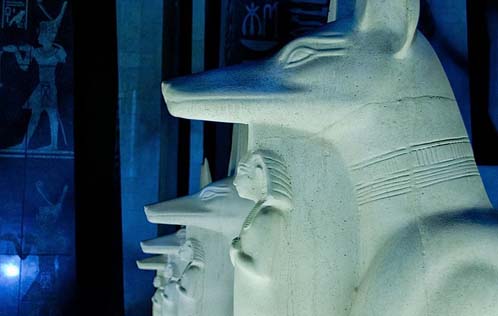 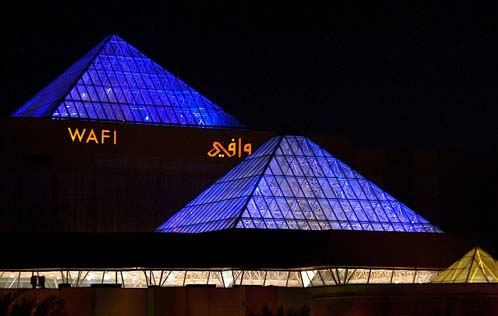 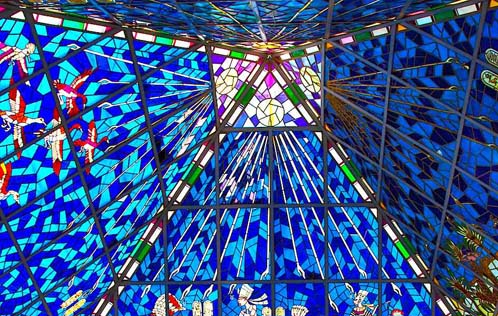 The pyramid view from inside the Mall

The white elephant is the rarest of all elephants – an albino – both sacred to ancient Thai court and belonging to the god Indra in Hindu mythology. Due to the holy reverence of the animal, it is not allowed to work. Therefore, although beautiful and rare, it is expensive to maintain and altogether quite useless. Although I could be talking about several women who live in Jumeirah right now (quite possibly including myself), instead I would like to apply this metaphor to one of my favourite hideously attractive architectural and economical wonders of Dubai – Wafi.

Modelled on an ancient artifact, filled with modern trappings. Geometrically perfect, geographically challenged. Filled with marble, devoid of motion. It stands out in its island in Oud Metha like the proverbial dogs whatsits, and yet is almost impossible to get to. The signs on the E11 arterial are after the exits, so you will always miss your first opportunity, resulting in a 10km diversion either over Garhoud Bridge or down Oud Metha Road. I suspect people may WANT to go to Wafi. They just give up before they get there.

Even on a Friday afternoon, when every other mall in Dubai is choked with the material-seeking populace, Wafi is pristinely silent. The occasional set of designer stilettos tip tap their way across the lonely marble floor. Shop assistants mimic the statues in the gracious foyers, eyes staring blindly, limbs frozen, nothing to do but stand around looking beautiful. A janitor sweeps the floor. But it is already clean. He buffs it. But it is already polished.

The shops are nearly all high-end, or as Wafi calls them, “artistic and influential”. Many would just call them expensive. Until recently the centre lacked a grocery store. Instead, they had “Wafi Gourmet”, a  fairly good and expansive Lebanese delicatessen which remained the destination store, until the owners opened another branch in the Dubai Mall, which now seems to have drawn away their custom. Now Wafi is a destination mall with a feature store that can be found elsewhere.

In the evenings, Emirates Airline staff come to the rescue. Their staff discount across the food and beverage outlets ensure there is always a reasonable crowd, but also that the restaurants seem perfectly comfortable to stand resting like a custard developing a skin. Has Carters ever changed? Some of the restaurants were initially famous – like Asha’s and Biella, but they, like Wafi Gourmet, have been usurped by secondary venues, and the other restaurants replaced by more modern alternatives elsewhere. The Planet Hollywood sign is wearing five-year-old dust, you can barely read the words “Now Open”, as if the restaurant was recently launched. It hasn’t been reviewed by Time Out Dubai since 2008.

There is one restaurant that has been renewed. The W Grill has recently launched, in a spangling of crystal and glittering lights. There is no lack of magesty on its sweeping terrace with views over the inner court and geometric rooftops. At night you will receive the Wafi Sound and Light Show as accompaniment – very clever moving image spread over the statues and walls that goes off every hour. If you prefer the indoors, you can sit in the shade of a two-metre diameter chandelier with egyptian styling. The steaks upon opening were actually pretty good – lets hope they continue. And now Wafi has its loyalty card, we can all benefit from a discount (20%) – if not quite that of the Emirates staff.

But during the day, the only patrons to be found are bored housewives window shopping, or tourists from the big bus tour who mistakenly stepped off in the splendiforous central courtyard thinking it must be the Dubai Mall. They stumble around the upper levels, marvel at the technicolour glass pyramids, un-ancient hieroglyphics in gold bas-relief, and designer labels, take a million photos, then have a burned coffee at Paul and get back on the bus without ever knowing the name of the mall.

They don’t discover the treasure that lies beneath. The lovely souk – the prettiest in Dubai, and with prices that rival the old souk if you bargain hard enough, and a much better range, including carpets, trinkets, textiles, perfumes and sweets. I’ve spoken about Khan Murjan before, and the restaurant that lies at its heart – one of the best eateries for tourists who really want to feel like they are in the middle of the exotic middle east, and with bread fresh out of the oven so good that it almost makes me cry. If you sit on the wicker chairs over the mosaic floors in the filtered light through the curtained open ceiling, and cast your eyes around the crowd, you will find them mainly in gulf national dress – proof the tourists don’t come down to this level. But I always wonder when I wander down here – who actually pays for this place to continue to exist?

So back to Elephants and metaphors. Wafi really is some piece of work, but how long can it survive with barely anybody shopping? Should we diverge from “White Elephants’ and perhaps open the topic of the “Elephant in the room”? Maybe it is time to admit that there are things in Dubai that are possibly more trouble than they are worth? Wafi is a treasure, but its saddening to see it lie empty. It needs a complete overhaul – just one restaurant wont change it. I remember the launch of Khan Murjan a couple of years ago – I would expect there was hope back then that this would revive the struggling mall. If this wonderful place couldn’t do it, I’m not sure what could.

Dubai is becoming a victim of its own success – there are simply too many great places to go, and not enough people to attend them. Secondly, our modern-world loving, transient expat population is so happy to let the old go. Expats are by nature, characters requiring change, early adapters, innovators – it’s why many of us are no longer living in our home countries. We brush off our successes like dandruff, moving quickly onto the next shiny object. It seems a new mega-mall opens in Dubai every six months, and at the same time, another is made redundant. I suppose it keeps the building industry going…

So this is a call out – go back to Wafi, before it turns into a pillar of salt. And don’t bother looking for street signs on Sheikh Zayed road – instead check out the map link here. (hint – take the signs to Healthcare City).