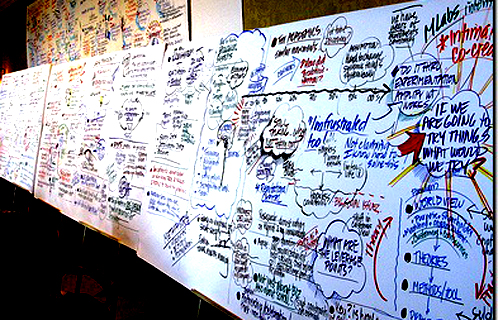 Managing large projects can be an aging experience anywhere in the world. You need vast reserves of patience, resilience and tact to deliver on time, on budget and to specification.

Here in the Middle East, add the challenges of dealing with multinational and multicultural workforces, and working in organisations where authority as often derives from patronage as from boxes in an organisation chart. So successfully steering a big project to completion can depend heavily on political skills.

And when the project manager is working within an authoritarian management ethos, fear of failure often causes people to be less than frank about things that are going wrong, or to try and shift the blame on others. Small wonder that the same people try to preserve their positions by being reluctant to share knowledge.

Saira Karim, who is a project manager and trainer, writes an interesting blog that sets out to be a forum for project managers in the Gulf and Saudi Arabia. In a recent post she explains why a competent project manager should have a high degree of networking skills. And she is right. Influence, persuasion and willingness to share knowledge are essential tools in the armoury. Without them, it is easy to win battles and lose wars.

As a consultant, I had an interesting conversation with the CEO of a fast-growing Saudi construction company a few months ago. The company was benefiting from the construction boom, but the CEO felt that they were being held back by the fact that authority tended to reside in a small and dynamic group of leaders, many of whom had been with the company since its foundation three decades ago.

It had a reputation for competence, but as often is the case in fast-growing businesses, its business systems had not caught up with its growth. So the CEO bemoaned that fact that he was still working a sixteen-hour day, but much of his time was spent dealing with issues such as approving exit visas and holidays!

Another concern was that although they did outstanding work, they had no common project management methodology.  Each manager did things his way, with the result that although from one project to the next the technical language was the same, the method of carrying out each project was slightly different.

I suspect that they are among many companies that rely on unrepeatable miracles for their success, which is why a blog like Saira’s can be influential in helping to promote best practice within the region.

Another problem that an eager project manager will face in this region is the gap between intention and reality, especially where organisational change is concerned.

A friend in the Gulf who is involved in a major business transformation programme recently highlighted the problem by quoting a rather cynical colleague who was working on the same initiative. “One thing that you have to realise about our company”, the colleague said, “is that no project that we undertake makes any sense unless it is preceded by three hidden words.” “Which are?” asked my friend. “The appearance of….” replied the colleague.