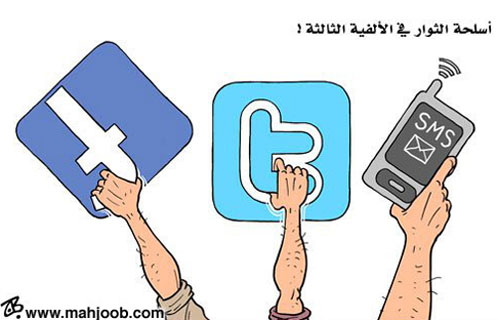 As many already know, today is World Against Cyber Censorship Day.

While I’ve usually used this day as an opportunity to highlight the importance of keeping a free Internet in a country like Jordan, this year I feel like that call has catapulted to the forefront but for entirely different reasons.

Last year, we saw moves by the former government to introduce or at least support a form of cyber censorship in the country through a cyber crimes law, and it was important for people working in the fields of human rights, the Internet, media, journalism and information technology to mobilize and hinder such legislation.

Luckily, that law was subjected to enough public scrutiny that its articles, some of which enabled censorship online, were amended. In other years it was about taking the opportunity this day presents to ensure our Internet stays free in a region where the tendency is to head in the opposite direction – but ensuring such freedom specifically in order to ensure the Internet remains a space of opportunity.

In other words, one could not predict what the possibilities of a free Internet could mean for a country like Jordan in a region like the Middle East, but we knew that it needed to be free before any possibilities could be realized.

This year, things are different. We have seen just what happens at the hands of the Internet. We have witnessed the possibilities and seen them realized in countries like Tunisia and Egypt, where activists used the space to mobilize, spread messages, advocate, and come together offline. Even when their governments converged to restrict the Internet, the people found a way around it, and their messages broke through in to free spaces where they were carried forward from one person to another.

In Jordan, we have seen the power of conversations evolving online like never before. On Facebook we’ve seen youth groups forming, expanding and mobilizing for collective effort. On Twitter we’ve seen hashtags like #ReformJO and #WhatJOwants outlining the reform process by listing key requirements that this country needs to progress and move forward.

If the state has run out of ideas, it needs only to spend a few minutes falling the virtual stream of suggestions and discussions online. At 7iber, with the HashtagDebates, we’ve been trying hard to take some of these online discussions turning them in to offline debates that share the same forward-thinking and brave spirit that exists online. The power of the conversation that I see online today is at an all-time peak in Jordan, and it is made possible only through the upkeep of a free Internet.

There are those who continue to argue that the Internet is useless in a country or region where penetration rates are low. To those people I say look around you. Look at what happens when information flows through an assortment of digital channels that are all interconnected. It isn’t about how many Jordanians are on Twitter, it is about what happens to a message or a conversation when it starts on Twitter, flows through Facebook, takes off on a local blog, is copied and pasted in an email and lands in your cellphone’s message inbox.

The cyber world we exist in, and the technologies that surround us, are becoming increasingly decentralized. The barriers are too low to remain legitimate obstacles. Debates that were once exclusively online, are now evolving offline at the hands of the same players.

And meanwhile, Jordanians, specifically Jordanian youth who represent over 60% of this nation’s population, are incredibly resourceful. In the past year, through my work at 7iberINC and the various digital media related projects we’ve done, I have seen firsthand the extent to which young Jordanians are accessing the Internet without needing a computer in their living rooms that has a 4MB ADSL connection.

I have seen them finding access through schools, through Internet cafes, through public access stations, through their relatives and through their friends. I have seen 13 year old kids in Sahab who are busy chatting away on a local forum by gathering around a single screen at a friend’s house. It is a population that is accustomed to scarce resources, and has found ways at being resourceful.

The story continues, the possibilities are ongoing, the access is unprecedented, and so is the discussion.

I am thankful the Internet remains free in Jordan, and I can only hope that it remains so. I can only hope it continues to fuel conversations, set precedents, create milestones, and confound the possibilities we haven’t even dreamed of yet.

I’d also like to take the opportunity to congratulate the Tunisian www.Nawaat.org, which, in honor of World Against Cyber Censorship Day, won this year’s Reporters Without Borders 2011 Netizen Prize. Tunisian bloggers have done a tremendous thing these past few weeks, to say nothing of Egyptian and Bahraini bloggers as well.