Western Liberals and their ‘Problem’ with “Muslim Rage” 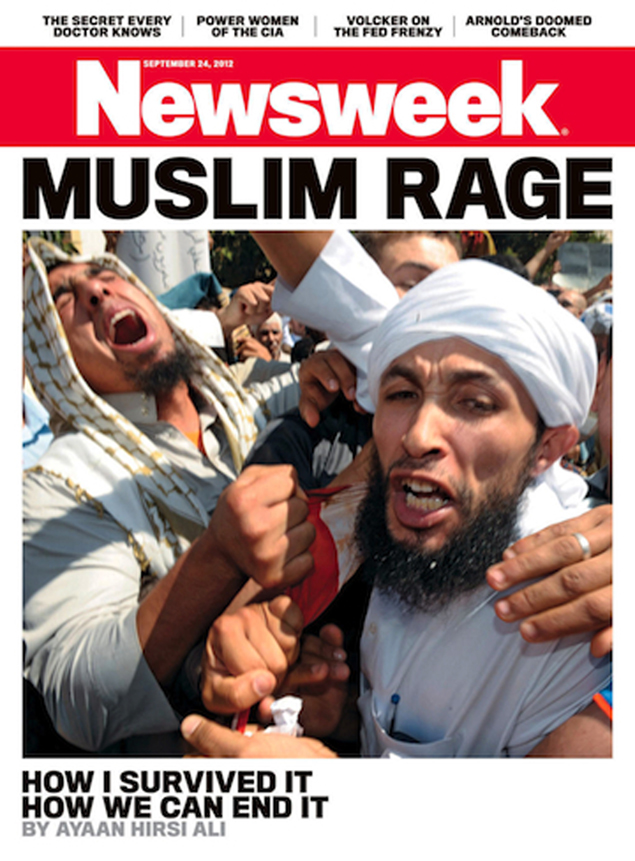 The western liberal élite has a problem with Muslims, in particular with Muslim Rage, as Newsweek’s cover called it.  It reminds me of that priceless, old misogynist quotation from Sigmund Freud: women–what do they want?

What do Muslims want, columnists like Roger Cohen, Bill Keller, and Nicholas Kristof seem to be saying.  They want to be part of the modern world yet they import these age-old hatreds that are so–well, primitive and unmodern.  Muslims aren’t ready for civilization-primetime.

In his latest column, Cohen takes to calling Islam “fervid and turbulent” compared to its older brother religions, Christianity and Judaism, which are oh so much more mature and stable, apparently.

All of this serves as background related to a provocative Islam-hating film produced and promoted by the Coptic Christian diaspora.  No doubt, you’ve heard all you need to about this piece of garbage, so I won’t repeat what you already know.

What non-Muslim westerners can’t fathom is how angry Muslims were in response to this calumny.  To an insult, they said, you respond by killing?  We don’t do that anymore in modern society.  We’re above that sort of blood-letting.  We solve our differences civilly through debate and the free exchange of ideas.

As if.  The history of all western religions is replete with murderous rampages far more destructive than the riots that swept Libya and 20 other Muslim nations over the past weeks.  If you’re a Christian you should know of the Crusades, the Inquisition, and various heresies like the Albigensian Crusade , a sectarian theologically-rooted genocide.

Jews historically, have enjoyed less power to take vengeance on their enemies or heretics within.  But Biblical history tells of the extermination of various tribes like the Amalekites, Jebusites and Moabites who stood in the way of Israelite conquest of ancient Palestine. In latter-day Israel, a virulent variant of Judaism known as settlerism engages in acts of violence against Jews and non-Jews alike who question Jewish supremacism in the so-called Jewish state. This Jewish Rage takes the form of violent pogroms, killings, arson, and sexual assaults that are no less primitive than anything we saw in Libya.

By what right does the pot call the kettle black? Why do we allow amnesic liberal journalists like Cohen, Kristof and others to wag their fingers at the “turbulent” Muslims, all the while forgetting that Judaism and Christianity have been roiled by precisely the same schisms and hatreds leading to even deeper levels of violence.

Lest they say: well, that was then this is now. In ancient times, sure humanity pursued ancient hatreds. But today, we’re more civilized. Disagreements can be worked out through civil discourse rather than riots in the streets.

Tell that person to turn back the pages of history only a few decades to Sarajevo in the 1990s when an Orthodox Christian Serbian army besieged a Muslim city (Sarajevo), shelling it unmercifully. Remember an act of genocide called Srebenica in which thousands of Muslim men were slaughtered. Then tell me how much better we resolve our differences in today’s world.

Add to that America’s new-found zeal for finding and making enemies in the Muslim world through Obama’s “kill lists” and faceless drone strikes in many Muslim nations. No one, certainly not Cohen or Kristof noted that the potent combination of American attacks that have killed hundreds of Muslim civilians throughout the Miseast; and an Islamophobic video produced in America, have created a perfect storm of outrage. So no, it’s not just a puerile video, but an unending series of violent assaults by America in Pakistan, Yemen, Somalia, Afghanistan and Iraq–with Iran possibly being added to the agenda–that have brought on this latest crisis. And no, it won’t be the last.

So my response to the journalists tut-tutting over Muslim rage is first to look in the mirror. When you understand the rage that burns in every human heart and can acknowledge that all of us are guilty of it, then you may offer a tutorial on tolerance or whatever lesson you wish to teach. Till then, you’re little more than a hypocrite who’s conveniently forgotten the lessons of history.

Let’s return to another bit of Cohen’s condescension. He calls Islam “hypocritical” for:

Deploring attacks on it while often casting scorn on Judaism and Christianity, claiming the mantle of peace while inspiring violence

It seems to me there’s at least as much Islamophobia in the world as there is Muslim intolerance of western religions. As for inspiring violence, well, America far outstrips any Muslim nation in it’s capability for inspiring violence in the Middle East. Whatever legitimate grievance we came to Afghanistan to avenge has been long-since exhausted.

There is another troubling element to this liberal western proffering of advice to the world’s Muslims. What gives them the right? If they offered a balanced critique of the deficiencies of all the major religions, then we might say they’re entitled to include Islam within the scope of their brief. But singling out one religion, one that isn’t even yours smacks of Orientalist cultural condescension.

I feel the same way when non-Jews try to lecture me about what Judaism is or isn’t–usually by way of saying why I’m not a proper Jew. What chutzpah. I, who lived and pondered this religion I’ve born into my whole life–being lectured by someone who doesn’t have the faintest idea about what this religion all about.

There are, it is true, even a few Muslims who’ve taken up the cry of the western liberal elites. We expect to hear such attacks from figures like Salman Rushdie, who provoked Muslims with his portrayal of the Prophet in Satanic Verses and who was demonized in return. There are others like Qanta Ahmed, who wrote a strange op-ed in Haaretz in which she suggested to her Muslim brothers that they would do well to emulate the spirit of humility, repentance and forgiveness represented by the Jewish holiday of Selichot. Somehow, the idea of a Muslim woman recounting High Holiday services spent with her Jewish medical mentor and his family isn’t going to be terribly persuasive to a Muslim audience.

When will someone show me a Jew attending services in a mosque who draws a profound lesson from Muslim faith that is lacking in Judaism? Then, Ahmed’s moralizing would be more welcome inside the Muslim community. It should go without saying that Ahmed is a Templeton Fellow, so designated by the conservative Christian foundation of the same name. She appears to be an ally of Zuhdi Jasser, another conservative Muslim at odds with most of the rest of American Islam. She joined him in testifying to the profoundly Islamophobic King committee that sought to portray American Islam as riddled by jihadism. They both also defended the NYPD for its spying against Muslims. Both have participated in the Muslim-baiting efforts of the Clarion Fund and its triad of anti-Muslim films.

To be clear, I’m no more justifying or excusing the bloodbath that took place in Libya than I am the one in Srebenica or Anatot. They’re all horrifying. They all prove that our respective religions can be hijacked by extremists who represent the worst our religions have to offer the world. But those who offer lessons to others without taking stock of their own failings aren’t suited to be moral avatars.