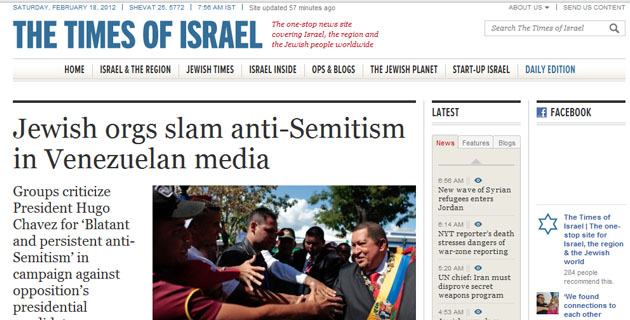 I’ll bet if I asked you what Israeli journalism needed more than anything, the first thing out of your mouth would be: we need yet another English language clone of the Jerusalem Post (Hebrew). I knew we’d see eye to eye on that one.

Yes, Israel already has one English language Likudist daily, one English language pro-settler news portal, and one Hebrew language Bibiphilic daily funded by an American Jewish billionaire. Israelis just can’t get enough of the neocon media brand. And everybody knows that there’s way too much truly independent or, God forbid, liberal-progressive journalism in Israel.

So to fill this gaping need into the breach steps David Horowitz with the rather shamefacedly titled, The Times of Israel. No, not the far-right firebrand ranter David Horowitz, but the soft-right former Jerusalem Post editor, David Horowitz. I tell ya, can’t tell your right- wing David Horowitzes without a scorecard.

Like any self-respecting right-wing editor starting a new media venture, you need a suitable billionaire with loads of pro-Israel baggage. Horowitz has found his Rothschild in Seth Klarman, owner of the Boston-based Baupost hedge fund family.

In terms of his domestic politics, Klarman seems to be a soft-core Republican who spend about $100,000 every election cycle on mostly Republican candidates (though he does know on which side his bread’s buttered and he does throw some money the Democrats’ way).

But on Israel, Klarman is a fierce pro-Israel advocate with no subtlety or nuance to his views. As Phil Weiss made clear in a November profile, Klarman is a major funder of the David Project, Friends of the IDF, the pro-settler Central Fund of Israel, and Ir David, a settler enterprise attempting to Judaize East Jerusalem under the guise of historic Jewish archaeological claims. He drops a cool mill a year on Birthright Israel as well.

Laughably, Horowitz claims that he will maintain strict editorial control of the new enterprise. To emphasize that point, Mr. Klarman felt the need to have his say with a personal editorial statement of his own. So much for editorial independence. The new venture will supposedly be free of political affiliation and have no allegiance to any politician. Horowitz claims it will feature a broad spectrum of opinion: all the way from Benny Morris on the “left” to Alan Dershowitz on the “left” (that’s a joke).

We now have Sheldon Adelson sinking $40 million a year into Yisrael HaYom. A few years ago, we had a Levi Strauss heir drop $7 million to fund Pajamas Media. Now we have Seth Klarman. Israel needs these far-right pro-Israel billionaires like it needs a hole in the head.