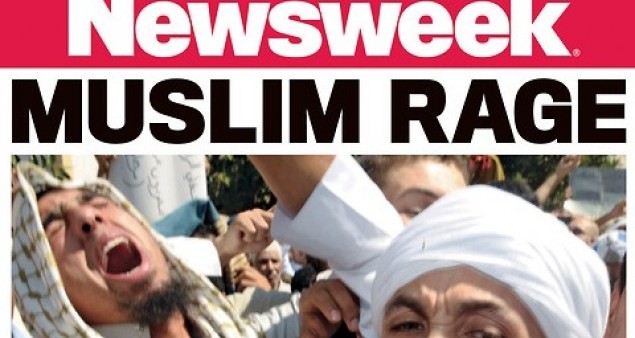 Edward Said wrote a poignant critique of media coverage of the Iranian hostage crisis just over three decades ago. He called it “Covering Islam.” The subtitle was “How the Media and the Experts Determine How We See the Rest of the World.” Once again Islam is being covered, the latest being the “cover” on Newsweek Magazine. Said’s [Covering Islam (1997 edition), p. lv.] assessment is as relevant as ever today:

For the right, Islam represents barbarism; for the left, medieval theocracy; for the center, a kind of distasteful exoticism. In all camps there is agreement that even though little enough is known about the Islamic world there is not much to be approved of there.

The latest Newsweek cover demonstrates just how weak its sense of responsible news reporting is. The trope of “Muslim Rage” conflates the cultural dimensions of politics with a religious faith. When Israeli planes bomb Hamas in Gaza, no major newspaper calls this “Jewish Rage.” When Terry Jones burns a Quran or when Anders Behring Breivik shoots fellow Norwegians, I have yet to see a headline of this act as one of “Christian Rage.” Rage is almost always political at base and the events subsumed under a blanket umbrella of “Muslim Rage” are local politics to the core. The fact that we see these images on CNN and the Internet tells us more about the audience than it does about those engaged in the activities.

The photograph captures “rage” to be sure, but the choice of turbaned and bearded protesters (when the majority in Cairo at least are young clean-shaven men in Western clothing lobbing rocks at the police) identifies rage with a style of dress and a style of dress with a violent religion. Ironically, the voices of those who are enraged are not to be heard anywhere inside the story. Instead, the cover boasts an article inside by Aayan Hirsi Ali, a controversial Somali whose claim to fame was posing naked with Quranic verses on her body and then becoming a darling of the Islamophobic mob. Her knowledge of Islam is so immature and biased that the very idea she might have something to contribute to the issue staggers my imagination.

I see little difference between this cover photo and that on the French tabloid Closer, which brandished the privately bared royal breasts of British princess Kate Middleton. Both are sensationalism as a ploy to garner commercial sales. Newsweek is not in the business of reporting news as much as it is in selling a magazine in a digital age in which print magazines are doomed to extinction. The fact that the Newsweek website is on The Daily Beast is ironic in more ways than one. The magazine has hardly been a daily rag, but its reporting has indeed become quite beastly of late. Perhaps the editors have been watching too many Youtube videos of “The Naked News.”

Ayaan Hirsi Ali’s article (which I tend to doubt she actually wrote in its present state) is called “The Last Gasp of Muslim Hate.” I am not sure if this is meant to refer to the “Muslim Rage” on the cover or her own spiteful gasps. The article is mostly about her own life and the reaction to Salman Rushdie’s The Satanic Verses. Ms. Ali has every right to become secular and to be critical of aspects of the religion she grew up in. But using her name for an article that contributes nothing to the current crisis in these ongoing political protests is lowbrow, tabloid journalism. Newsweek might as well as show her with bare beasts, like the royal princess. ForNewsweek the relevant “T” here is for Tabloid and not for Truth. It looks like the Romney/Ryan campaign provided some of her talking points, as in the following:

We must be patient. America needs to empower those individuals and groups who are already disenchanted with political Islam by helping find and develop an alternative. At the heart of that alternative are the ideals of the rule of law and freedom of thought, worship, and expression. For these values there can and should be no apologies, no grovelling, no hesitation.

I do not know any sane person in our government who has apologized for holding these values. Certainly our government’s efforts to diplomatically steer a course through the mine field of Middle East politics is not about groveling. The U.S. response to the killing of our ambassador has not been hesitant. I doubt Osama Bin Laden thought anyone in the Obama administration was apologizing to him. Short of sending drones to do our dirty work or more American lives to be lost in a fruitless overseas war, there is little else to do but what our government is currently doing.

But what does Ms. Ali mean by the “last gasp”? She has so little grasp of the contorted politics in the countries where these protests have turned violent that I see only a self-inflicted gasp. Indeed we must be patient, a sentiment that Newsweek certainly does not understand by publishing an incendiary cover and a self-serving article. But raising the issue of “free speech” as a basic human right is silly; in the real world there is such a thing as “responsible speech.” The pathetic film trailer that appears to have sparked the current wave of protests (with the aid and blessing of the most militant Muslims in these countries) was meant to provoke rage. It is not only inaccurate but really bad cinema and would have died the usual Youtube death had it not come to serve the interests of other haters.

Newsweek gets weaker and weaker. I stopped reading it quite awhile ago. If it wants to be a pure tabloid, then the editors should just give a call to Rupert Murdoch and I am sure he will welcome their “entertainment” with open arms. And I have news for Ms. Ali, who quotes Voltaire (without really understanding Voltaire). Voltaire, and certainly Dr. Pangloss, would have no patience for the pablum of Newsweek and her diatribe.

2 Responses to Turbanned, Bearded and Angry: Western Media on Islam