The Real Damage of Vanity Fair’s Attack on Dubai 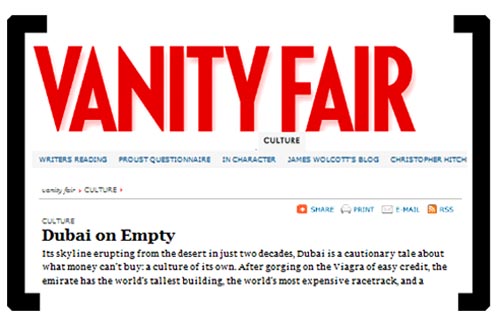 The UAE is up in arms about a scathing critique of Dubai in the most recent issue of Vanity Fair. The author, whose professional career appears to be built upon offending various groups, viciously attacked most things Dubai — notably Emiratis and Western expats. An obviously gifted writer, A.A. Gill writes in this typical passage:

Much of the article is quite offensive to people who live here but disagree with his sweeping conclusions. The article does contain some kernels of truth. For instance, Emiratis and Western expats do tend to lead an affluent, cushy lifestyle here. Indeed, Emirati columnist Aida Al Busaidy penned an editorial today that chides her countrymen for relying upon their help for so many tasks.

But, Gill’s tone does the most damage. He sounds snarky and bitter. His demeanor immediately erodes the ability to deliver a meaningful message to an audience that actually lives in the emirate. Of course, he didn’t write it for the UAE; Gill authored his vitriolic piece for the people who read Vanity Fair. They will read it quickly, have a laugh, and, some of them will surely feel smug that they don’t live here.

Gill, of course, has a habit of this type of thing. His list of offended groups include the Albanians, Germans and even the oft-overlooked Welsh. The people of the UAE have just joined a growing club.

The reaction here was predictably negative. H.E. Najla Al Awadhi, the prominent member of the Federal National Committee, urged her followers on Twitter to comment on the article and speak out against Gill’s “racism.” Aida Al Busaidy chided Gill and ascribed his motives as “hatred and jealousy.” Tom Gara, a Financial Times reporter based in the UAE, noted that much of the report appeared to have been written before he ever arrived.

Gara provided the only mild defense by tweeting that the UAE should consider the article “karmic payback for forcing your citizens to read foreign newspapers for truthful coverage of their own country.” That’s a good point — the weak news media laws in the UAE prevent the local press from offering anything approaching truly critical reporting. Of course, Gill’s brand of journalism isn’t critical; it’s brutish.

And herein lies the greatest damage that Gill has perpetrated — far worse than simply tarnishing the image of Dubai in the minds of global readers. Instead, Gill gave palpable evidence to those in the UAE who believe that journalists can’t be trusted to be “free”. His behavior provides powerful ammunition to those who oppose creating stronger protections for press freedoms here. Gill’s article shows these opponents that the country’s current laws are beneficial because they force journalists to be “responsible” in their reporting.

This is a shame. Gill’s article does not show the need for restrictive press laws. His Vanity Fair piece shows the need for journalists to take their profession seriously and to act with integrity.

It’s doubtful that Gill will ever realize the error of his ways. He’s probably moved on to his next journalistic victim. Unfortunately, the UAE may be left with the effects of his report for years to come.