Ten 10 Predictions for Digital in the MidEast, 2011 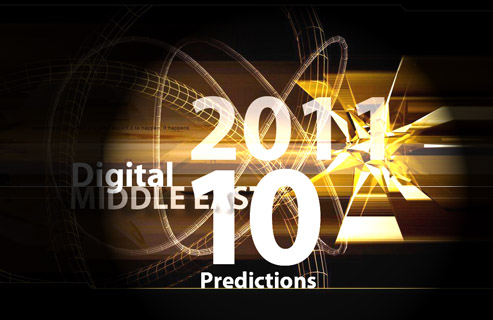 Well, 2010 was quite a year for digital marketing in the Middle East. Under pressure from global economic turbulence, many brands were forced to look for more cost effective ways to market themselves and although 2010 didn’t result in the digital marketing bonanza that some hoped for, we believe the year was successful in engaging more of the region’s marketing community in discussion and taking the Internet a lot more seriously. Looking at the flurry of digital marketing activity against the backdrop of macro-economic trends in the Arab world’s largest economies, higher Internet penetrations, new regional e-commerce options and the increasing influence of social media across the Middle East and North Africa and it all starts to look quite exciting.

So, what can we expect from 2011? Here is Spot On’s digital marketing forecast for 2011. Some of our predictions may seem a little obvious and some may seem a little extreme, but we hope they provide you with some food for thought…

2.    In 2011, many more marketers will embrace mobile apps spurring on local application development.
The future is bright for mobile apps in the Middle East and North Africa. 41% of 7,400 MENA mobile Internet users surveyed by Effective Measure and Spot On during November had downloaded a mobile application, with 24% of those saying that they’d actually paid for a mobile application. As smart phones continue to gain market share we can expect mobile applications to move from early adopter audiences to the wider market. Marketers are already starting to latch on to mobile app opportunities, creating specialised apps for their own key mobile audiences. iPhone’s funky, but Blackberry and Android are the ones to watch.

3.     Tablet adoption will rise quickly in the region as multiple devices enter the market, creating new content opportunities.
Forty-odd tablet devices are already out there supporting Google e-books, Adobe DRM, not to mention commercial and retail applications. All the technology in the world is no use unless people buy it, but this is a device that people really seem to want to own. 49% of MENA Internet users surveyed by Effective Measure and Spot On PR during November* said they planned to buy a tablet device during the next three months.

4.    Facebook will open up new opportunities for Arabic language marketing.
We’re not trying to tell you that Facebook is the end-all for digital marketing in Arabic, but its growing usage in the region and the way that it makes sharing Arabic content with your friends so easy makes Facebook a powerful force. Facebook added 5.7m Facebook Arabic users since March last year (December 2010 figure), when Facebook introduced its Arabic interface.  Today’s Facebook Arabic users account for about 28% of all users in MENA, while users of Facebook’s Arabic interface crossed the 50% mark in Saudi Arabia a few months ago. By the end of 2011, we believe over 40% of all Facebook users in MENA will use Facebook’s Arabic interface, meaning that the number of Facebook Arabic users alone will outnumber the region’s combined newspaper circulations.

5.    The swelling numbers of consumers online across MENA will force more consumer brands, retailers and consumer service companies to embrace digital.
Seems a very obvious assertion, but what we’re talking about is moving past the point where many brands can survive without an online strategy. Whereas the vast majority of consumer marketers in the region still lack a structured digital strategy, we do see consumer brands moving online and developing digital strategies, if only to ensure that they have some virtual real estate staked out for the future. As social media marketing becomes more mainstream, e-commerce develops further and the number of social media users in the region becomes overwhelming, many consumer brands will be forced off the fence and will invest in online programs.

6.    The Arab world’s online shopping market will become broader-based, providing consumers with new choice and web ventures with new opportunities.
We are already seeing the emergence of e-commerce sites in the region, with established retailers offering online shopping and expanding their offerings. With over 1.8 million consumers in the UAE alone shopping online, the revenue currently being spent on overseas retail sites will be augmented by more revenue spent locally. Payment options such as PayPal are also opening up in the region, taking us beyond cash on delivery.

7.     Online Arabic language content will remain an issue of concern for the region, but opportunities for Arabic content will continue to grow, perhaps faster than ever before.
Millions more Arabic users will share content via Facebook, changing the way Arabic content is consumed and, by the way, inspiring more users to use other online tools to share content that interests them. Existing and new web ventures will add new ways of creating, aggregating and sharing user generated content in Arabic.  We believe all these factors will create a growing demand for Arabic content is being created, even if quality online Arabic content has lagged so far.

8.    Independent online media launches will continue, whilst traditional media continue to procrastinate about online.
Gaps let open by or not properly covered by newspapers and other print media will continue to encourage new online media start-ups. Spot On expects both broad-based news and vertical online media ventures to launch to cater to the Arab world. Some will succeed, some will fail. And sadly, the majority of newspapers in the MENA region will continue to see Internet ventures as a less viable for their content as they continue to struggle with publishing economics.

9.    A new generation of specialised blogs will emerge in the Middle East.
In fact, it’s already starting to happen, but we expect to see Middle East blogging rise in influence in 2011. Social networks are driving demand for relevant content for social media users to share with one another and in the Arab world, demand for a wider variety of editorial content is growing, including demands for specialised content. This new generation of bloggers are focused on their own chosen subject matter, specialisations or vertical interests will capitalise on their social media fan bases by launching specialised blogs. Consumer, community, professional and socio-political interests that have so far been underserved by bloggers in the region will encourage a greater breadth and depth of blog coverage.

10.    We will see more social change and social initiatives driven by online media, with people finding new ways to work together to achieve community objectives.
Lessons learned from social media activism in Iran and Egypt caution against pitting social media users against governments, security forces and the rule of law. However, the last two years have seen an increasing number of social initiatives in the MENA region driven by (or heavily supported by) social media usage to include charity work, volunteering and community initiatives. Using a wide variety of new free-to-use social media tools, ordinary people can help raise awareness for issues, drive fund-raising, garner widespread support for a cause and ultimately make a difference by positively affecting an outcome that they believe in. We’re going to see more good work done online during 2011.

Carrington Malin is a founder and director of Spot On PR, quite possibly the most respected technology public relations firm in the Middle East. Carrington posts regularly on www.spotonpr.com on all things media, digital and marketing.

3 Responses to Ten 10 Predictions for Digital in the MidEast, 2011