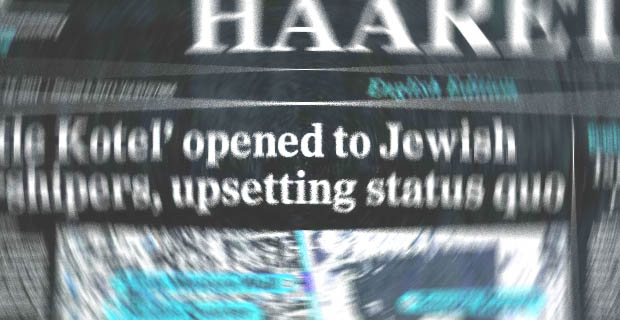 Over the past day or so, a fierce fight has erupted between Turkish prime minister Tayyip Erdogan and New York Jewish author, Paul Auster.  The controversy began when Auster, whose new book was recently published in Turkey, announced to an opposition newspaper that he refused to visit that country to promote it.  In the process, he blasted Turkey’s Islamist government for jailing authors and journalists:

“I refuse to come to Turkey because of imprisoned journalists and writers. How many are jailed now? Over 100?” Auster said, adding that Turkey was the country he was most worried about.

“Us democrats got rid of the Bushes. We got rid of  Cheney who should have been put on trial for war crimes,” the author said. “What is going on in Turkey?”

Erdogan, who suffers neither fools nor political opponents gladly, lashed out at Auster during a party conference, telling the author that Turkey didn’t need him to lecture it on how to be a democracy:

“Author Paul Auster…said he will not come to Turkey as he finds it anti-democratic because of arrested journalists.  Oh!  We were much in need of you!  [So] What if you come or not?” Erdoğan said during a party meeting yesterday.

Recalling that Auster joined a book fair in 2010 in Israel where he described Israel as a “secular, democratic country,” Erdoğan slammed the American writer for being unaware of the fact Israel was a non-secular state and had killed thousands of innocent people in the Gaza Strip. “I am sure Kılıçdaroğlu and Auster will join together for this year’s book fair in Israel,” he added.

Auster replied to Erdogan’s attack with this statement:

Whatever the Prime Minister might think about the state of Israel, the fact is that free speech exists there and no writers or journalists are in jail…All countries are flawed and beset by myriad problems, Mr. Prime Minister, including my United States, including your Turkey, and it is my firm conviction that in order to improve conditions in our countries, in every country, the freedom to speak and publish without censorship or the threat of imprisonment is a sacred right for all men and women.

While I don’t know Auster’s views about Israel, I presume he’s the typical liberal Zionist.  The brief substantive exchange he included about it in his reply indicated a fairly standard lib Zionist approach to the issue of Israel’s so-called democratic values, including press freedom and free speech.  It’s a shame he didn’t do his homework, as if he had he could’ve both bolstered his criticism of Turkey and done justice to the issue of the grave threats facing Israeli democracy.

There is no question that while Turkey as a nation has made great economic and political strides under Erdogan’s Islamist party, that country remains deficient in many areas which are well-known to many.  Kurds are denied basic rights, acknowledgement of the Armenian genocide is a crime, and freedoms that many in the west take for granted are routinely threatened in Turkey.  All of this is undeniably true.  As a friend of mine married to a Turk and living there says: while there is more freedom of speech than there has been in many decades, it is still a crime to “insult Turkishness” or say something “un-Turkish.”  The media is largely bought and paid for by moguls with large business empires who are willing to use their platforms to advance their business interests.  They do this by ingratiating themselves with the powers that be.  In the few instances when a corporate titan has allowed his journalists too much free rein to attack the government, he has paid a very high price in the economic warfare officials wage against him.

On the positive side, the country has made enormous strides in reducing poverty and addressing economic disparities and building wealth.  It has also undertaken a foreign policy offensive which has made it a critical regional player attempting to bring stability to such conflicts as Syria-Israel and Iran.  It will undoubtedly play a key role in ensuring the future stability of Syria if/when the Assad government falls.

But to get into a competition between the so-called freedoms of Israel and the so-called injustices of Turkey is a losing game.  Israel needs to be examined in its own right and not in comparison to any other country.

So let’s return to Paul Auster’s claims about Israel.  He hasn’t even scratched the surface.  Israeli journalists and media are under the gravest of threats from the right-wing government and its thuggish non-governmental allies.  Uri Blau, one of Israel’s leading investigative reporters, who broke the story of IDF targeted assassinations in violation of Supreme Court rulings, faces six years in prison if the government decides to prosecute him.  His crime?  He published top secret documents leaked to him by whistleblower, Anat Kamm.  Jared Malsin, English language editor of the Palestinian independent news agency, Maan, was imprionsed by Israeli authorities for nearly a week, and then deported because they no longer wished to allow him to practice journalism in the West Bank.
Military censorship applies to wide swaths of Israeli journalism and can be invoked regarding stories great and small. Though Israelis have learned to read between the lines to discover when a story has been censored, they still don’t know what information they’ve been denied nor why.

The Israeli prime minister told the editor of the Jerusalem Post that the two greatest enemies Israel faces are the New York Times and Haaretz. That is, Israel’s leading liberal daily is a threat to the existence of the State of Israel. Does it remind you of Nixon’s enemies list? It should. Does that begin to scare you, Mr. Auster? It should.

Israeli journalists from around the country called an emergency meeting two months ago to rally against threats to press freedom. The organizer of this event, Uri Misgav, reporting for Yediot Achronot, recently lost his job. Another reporter who wrote for Maariv, Ruth Sinai, lost her job as well. Her editor, a former associate of Bibi Netanyahu’s told her:

“Post-Zionist journalists will not write for his paper”.

This is Israel’s second-largest circulation paper. Does that scare you? It should.

The director of the Prime Minister’s office, who is himself under investigation for sex harassment, blackmailed TV Channel 10 by demanding that it fire investigative journalist Raviv Drucker in return for the government not taking the station off the air.  Drucker had just aired a damaging story about Bibi Netanyahu’s flaunting of ethics rules while he was an MK.

The Israeli Knesset is considering a new law which would drastically reduce the level of proof needed to convict someone of libel.  It would massively increase awards against those found guilty of defamation.  Complainants wouldn’t even need to establish proof of any economic damage in order to be compensated.  Publishers could also be held liable for defamation for comments published in the Talkback section.

Journalists who report from Israel for Arab language outlets like Al Jazeera face routine embarrassment and harassment at the hands of Israeli security officials.  This has included the stripping of female journalists by security agents before meetings with the prime minister.

Israel’s press is dominated by a single newspaper, Yisrael HaYom, funded by a billionaire for the express purpose of bringing Bibi to power and keeping him there.  Does this sound like a country that enjoys a free press?

I urge Mr. Auster and anyone concered about freedom of the press in Israel to visit the site of Keshev, Israel’s leading NGO in this field. Israel’s leading website providing media criticism and advocacy is Seventh Eye. Though it is only in Hebrew, it is highly recommended.

Regarding free speech, the threats are enormous.  Peace activists are routinely dragged before the Shin Bet for interrogation for the crime of speaking their mind.  The women of New Profile were threatened with prison for advocating draft resistance in opposition to the Occupation. Ilana Hammerman has similarly been questioned three times and threatened with prosecution for the crime of bringing Palestinian mothers and children into Israel to breathe fresh air at the beach and go to the zoo.  Solidarity activists at Sheikh Jarrah are routinely arrested and assaulted by Israeli police for opposing eviction of Palestinians from their homes.  Peace Now staff have faced bomb and death threats from settler extremists and the Israeli police don’t even prosecute when they know the identities of the perpetrators.

The Israeli justice system allows extensive use of gag orders to protect the interests of the state, the military, and the wealthy.  Gag orders are routinely granted without having to prove any specific jeopardy to the protected party.  Rape victims often may not discuss the crimes committed against them if they’re accusing a powerful man of harming them and he has a good attorney who can secure a gag order (cf. Yoav Even).

Though I know of few threats to writers of the sort that Auster complains about in Turkey, Israeli performers who don’t toe the political line pay the price as major roles dry up on stage and screen.  Haaretz, this week, featured a profile of Mohammed Bakri, perhaps Israel’s most famous Palestinian actor.  After directing the documentary, Jenin Jenin, he was blackballed from many work opportunities in Israel.  The Israeli Film Board banned the film until the Supreme Court lifted it.  He has not acted on an Israeli stage since 2003, a year after the film came out:

The last time Bakri…was seen on an Israeli stage was in 2003, in Shlomi Moskovitz’s “Seven Days,” directed by Dedi Baron at the Habima Theater…More recently Bakri was supposed to have replaced an Arab actor in one play and another theater director did not employ him, fearing reactions like those of Im Tirtzu. That is, Bakri’s prospects for employment in Israel have already been affected without Im Tirtzu’s campaign against him.

A decade ago or so, Chava Alberstein recorded a powerful anti-Occupation work which adapted the traditional Pesach song, Chad Gadya.  Many radio stations boycotted the song, the singer received death threats and she didn’t perform in Israel for many years.  The only places she could perform were abroad, where the controversy was less well-known.

So is Israel is haven for free speech and free press?  Hardly.  In fact, Paul Auster owes it to himself and his readers to study this issue in much greater depth.  He could speak out about these matters the next time he’s in Israel.  In fact, after what he’s said in the midst of this controversy, he has a responsibility to do so.  I’ve suggested to progressive bloggers in New York that they seek a dialogue with Auster and perhaps a public event sponsored by Jewish Voice for Peace or PEN to address the freedom deficit facing Israel.  I think it would be bracing and informative.  What better person to invite to speak on a panel with Auster than Jared Malsin, who spent a week in an Israeli jail cell for the crime of being a good reporter?