‘The Stream’: A Radical New Concept? 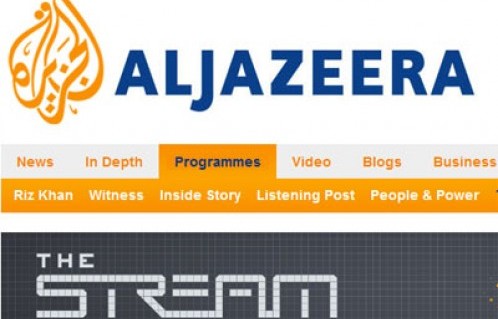 Since the Arab Spring began, much has been made of the role of the internet in the uprisings. It was a revolution that addressed our generation’s grievances, that brought our generation to the streets and used our generation’s favourite tools – Facebook and Twitter. Our parents struggled with the pace that things happened, and couldn’t really understand what was happening. This was our generation taking power.

A few months later, we’ve stormed the television headquarters too, to take power from the elders. The Stream (@AJStream) is the result. The daily programme on Al Jazeera English is hosted by two young presenters, Derrick Ashong and Ahmed Shihab-Eldin, who are both active on Twitter.

The concept is to bring the online on to TV. I have to admit I was sceptical when I heard of the show’s planned launch. It’s been done before, I said – the false holy grail of convergence, bringing the internet and television together. Throw some tweets on screen, trail the show online, and you’ve got a trendy, young show. Indeed, that’s what the first edition of The Stream felt like. But it has grown into something much bigger.

The Stream speaks to our generation’s interest in politics, while TV news produced by our parents’ generation constantly bemoans our apathy. This is Al Jazeera for those of us who came of age during the Arab Spring.

The guests put faces to the Twitter names that I have become accustomed to seeing on my timeline every night. That instant familiarity creates a buzz on the Arab Twittersphere and reinforces The Stream’s net-broadcast link. And, of course, those tweeps are brought on-air via Skype.

The decision to host the show in the US was a savvy one. At some points during the Tunisian and Egyptian uprisings, the majority of AJE’s online viewers came from the US (mainly because so few cable companies in the US broadcast AJE). It also shifts the balance of AJE’s output away from Doha and London (where most of AJE’s non-news programming is produced).

Of course, I’m hugely jealous that The Stream is not a London-based show, but consider this post part of my campaign to get Derrick and Ahmed to the UK.