On Your Bike – an Untrue Ad Executed Badly 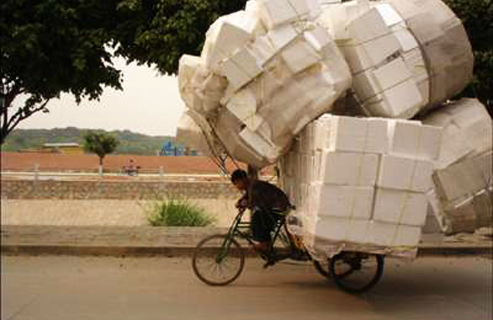 It’s always a delight when a new radio advertisement appears that stands out in the awful sea of half-baked drivel that punctuates the stuff you actually want to listen to. My delight is only enhanced that the latest piece of drooling, witless buffoonery originates from those admirable fellows at HSBC, the bank that likes to say ‘Is there anything else I can do to help you?’ at the end of calls where they have been signally useless. This is just one of many endearing habits, but I shall not allow myself to be sidetracked. Back to the radio spot.

“In Beijing a bicycle means transport, in London it means recreation while here in Dubai it means working out in the gym. We understand the world so give us your money.”

For a start, as both a consumer and business customer, it’s always reassuring that one’s bank can demonstrate a clear understanding of world bicycle usage trends. There are few aspects of the global financial services market that occupy me more.

However, the fact that the insight on offer from HSBC is clearly based on mildly egregious generalisations and in fact represents absolutely no insight whatsoever may be a worry to some. For instance, some Chinese people may (I know this is hard to appreciate, but bear with me here) actually use a bicycle recreationally or may even visit a gym. Londoners certainly use bicycles in the gym and many use it to get to work. This even in the city of London where you would expect people to be somewhat more advanced than those amusingly manual slanty-eyed coolies pedal pumping across the rutted tracks over in Chinkyland.

And here in Dubai, while I’m sure we’d all like to take comfort in the image of a city packed with successful young executives working out before a day of glorious triumph over world markets in their globally aware organisations, I’m afraid it doesn’t quite do justice to reality. In fact a bicycle to me rather evokes the gentleman in a grubby shalwar khamees who comes by our dumpster every day and picks out the cardboard to add to the tottering pile strapped to the back of his bike with a threadbare bungy.

But I’m cavilling, I know. It’s just an advertisement and not meant to represent the reality of the situation at all. It’s meant to increase my awareness of my bank’s global insight and the bicycle thing is just a sort of metaphor. Or to old fashioned moralists, simply a lie. What’s tragic is that it’s a badly told one…