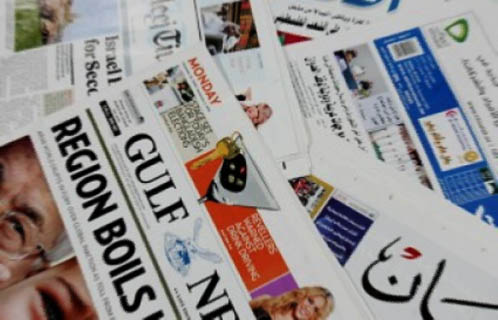 Three days ago, Al Jazeera reported that an Emirati man had been arrested in Khor Fakkan, UAE, after giving a speech at a mosque in which he supported the protesters in Egypt. The report provides little additional information and is attributed to Emirati “sources”.

Until this morning, no UAE media outlet had repeated the report or followed up on it. However, on Page 8 of today’s Abu Dhabi newspaper, The National, a small item (pictured above) raises the issue. The article reads:

Amnesty International yesterday urged UAE officials to disclose the status of a former school-teacher allegedly arrested for publicly expressing solidarity with demonstrators in Egypt and Tunisia.

Amnest said Hassan Mohammed Hassan al Mamadi, 52, was arrested last Friday in Khor Fakkan, in Sharjah, after allegedly coming out in support of the demonstrations in a speech during Friday prayers. The London-based human rights organization called on UAE officials to disclose the legal status of Mr al Hammadi.

Good to see the report being aired in the local press. Up until now, it appeared the UAE media would just ignore the story.

Of course, the next move would be to follow up on the article. Interview Hammadi’s family, for instance. Or ask specific law enforcement officials questions about his whereabouts. But, that’s probably asking  too much journalism given the current restraints.

Still, The National should be cheered for at least broaching the subject in their paper.