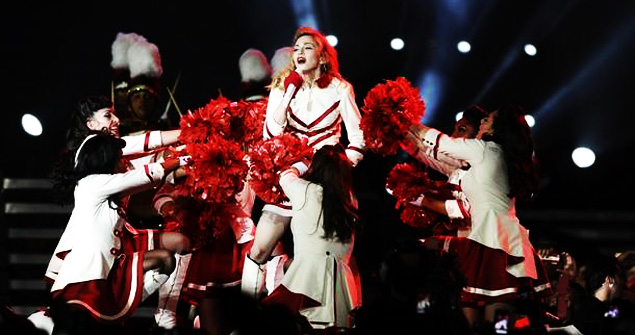 There are now a number of stories that have run in our local media that have been ‘stood up’ on tweets, those little 140-character darlings.

If you can muster a couple of grumpy tweets, it seems, you can run with “tide of public outrage” and even “down with this sort of thing”, which is about as strong as it gets, if you ask me.

Last week saw a splendid example of such a story when Arabian Business ran, “Madonna fans vent fury on social media after gig” – a story based on two tweets. One of these happened to be from Maha, a friend of mine. To quote the AB piece:

“Others suggested that the heat and humidity during the performance affected people’s enjoyment of the concert.

Another fan @Meho_M tweeted: “I’m just about ready to pass out from exhaustion and the Madonna madness hasn’t even started.”

If you look at her tweet (which most readers wouldn’t), you’ll see it was at 5.16pm, long before Maha arrived at the Madonna concert. In fact, it was sent before she’d even left Dubai for the gig. She’d just had a bad hair day. It’s clearly used out of context in the piece.

Rather deliciously, the other tweet quoted in the piece, from @financialUAE, was a comment from the online sidelines – she wasn’t actually at the concert at all!!!

But never mind, a story’s a story, isn’t it? It’s not as if our journalistic standards are any different to the UK’s either, as today’s Daily Mirror shows us. Because, sure enough, here’s our Madonna story again and it’s based on the same two tweets!

The Mirror’s story is a great deal grumpier, in fact: Time goes by… so slowly: Madge fans get mad waiting two hours for show in 40C heat  is the headline.

“Concert-goers in Abu Dhabi were left furious after the great-gran of pop kept them waiting nearly two hours in 40C heat.” Thunders the Mirror. To be fair, they did manage to rustle up a couple more unhappy tweets for their story, but the fact is their piece on a 10:40pm stage appearance is partially ‘stood up’ on a couple of tweets cribbed from Arabian Business – one sent out over five hours before the gig and one sent from a commentator who wasn’t actually there

And, one suspects, neither was The Mirror.

For there’s little else to substantiate the story, which could easily have been written from the comfort of reporter Clemmie Moody’s London desk. Well, when you’ve got people actually there tweeting, you don’t have to be there to report on it, do you?