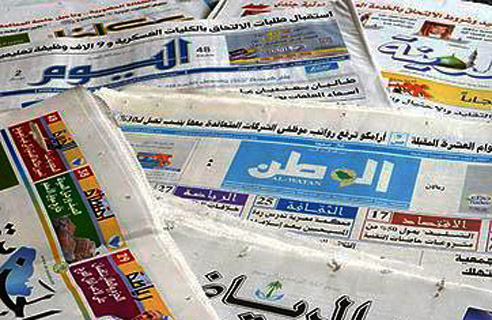 Saudi media is taking note of the WikiLeaks phenomenon. This piece from Arab News reflects probably the best and smartest policy that the Saudi government could follow: refuse comment.

RIYADH: Saudi Arabia has no connection with the documents published by WikiLeaks nor does it have anything to do with its formulations, said an official source at the Foreign Ministry. “We cannot confirm the authenticity or credibility of the documents released by the website.

Saudi Arabia cannot comment on them,” the source said in a statement to the Saudi Press Agency on Tuesday.

He added that Saudi policies are clear and well known.

The WikiLeaks website, which posted more than 250,000 confidential and classified documents on Sunday of diplomatic exchanges, has never revealed its source.

Meanwhile, the WikiLeaks website said it came under a forceful Internet-based attack on Tuesday morning, making it inaccessible for hours to users in the US and Europe.

An Arab News editorial takes another approach to deprecate WikiLeaks as important. It calls them ‘a five-minute laugh’ and notes that every country’s diplomatic service is equally vulnerable to having its private, in-house conversations leaked. Nor do the leaks contain anything particularly surprising.

THE initial response to the latest WikiLeaks disclosures is that they are a disaster for the US government because it has been shown to leak like a sieve; no one is going to trust it again after discovering what its officials have been saying about them.

The leaks are no such disaster. Although they provide a fascinating insight into way US officialdom works, they are of little material significance. Apart from some racy descriptions of international figures, there is almost nothing unexpected; nothing that was not already in the public domain. They contain almost nothing that a well-informed journalist could not have written. The impression given is of an army of highly-paid officials desperately seeking to justify their existence. And sometime failing. It is amazing how wrong some of the analysis is — such as that, two years after the AK party was elected in Turkey, confidently predicting it would soon fall apart.

The lead editorial in Asharq Alawsat, a sister publication of Arab News, is by its Editor-in-Chief, Tariq Alhomayed. He says the the leaked cables are scarcely more than gossip. While acknowledging that gathering information about world leaders is a legitimate quest for diplomats (and the countries they represent), the US has gone a bit too far in seeking out information like credit card numbers. I agree. He also says that diplomacy in the 21st C. is certainly not what diplomacy used to be. That, too, is true.

The advent of modern communications systems has utterly changed the way diplomacy is conducted and the change has been largely at the expense of diplomats. An ambassador had significantly more person power when it took six months for a query and its answer to cross oceans. He would hold the power to make decisions, on any matter short of war, in his own hands. Now, when a Secretary or Minister of Foreign Affairs, when a President or King or Prime Minister can just pick up a phone and call his/her counterpart, there’s a certain redundancy to the role of ambassador. Now, I don’t think heads of state are Tweeting each other or updating their statuses on Facebook, but they are utterly capable of going around their diplomatic branches if they choose to do so. Even back in the 1970s, with Kissinger’s ‘shuttle diplomacy’, ambassadors and embassies weren’t entirely in the loop when it came to cutting-edge policy.

The role of diplomats has changed. They still do many of their traditional tasks, like resolving commercial disputes, attempting to help in citizen affairs in a foreign country, promoting and explaining their countries’ policies to foreign audiences. They also provide, as best they can, assessments of how and why a particular country works the way it does. They continue to get instructions, marching orders, to bring information to foreign governments and to seek cooperation on any number of issues. They have to do it with new technologies, but also in the oldest means of communication known: face-to-face conversation.

Yesterday I wrote that international diplomacy was experiencing a crisis of confidence, as the majority of the U.S. cables posted on the ‘Wikileaks’ website are a major embarrassment to politicians around the world. More importantly, the cables have put the national security of a number of countries at risk, and have made the tasks of diplomatic communication, and security cooperation to combat terrorism, more difficult. The leaks will also be a source of panic in the economic sector, especially as information indicates that ‘Wikileaks’ intends to publish specific documents about a U.S. bank.

Yet the ‘Wikileaks’ documents were even more damaging, when they revealed that international diplomacy, contrary to what some people think, is a community of gossip. Whilst some believed it was a high-class, educated, articulate community, full of insight and vision, the reality is closer to the plot of a sensationalist novel. Of course, no one is naïve enough to assume that diplomats do not monitor facts and information about their counterparts, whatever their importance, or country. For example, there is a profile, or personal record, for each leader or international official, to get to know his way of thinking, and his style. However, this does not involve gathering information about the credit card details of diplomatic counterparts, for example. The language of diplomats is supposed to be more prudent, in other words, more diplomatic.

It is true that some of the documents make entertaining reading, as one western politician said, and it may help to provide an insight into the mentality of leaders, or politicians, but we cannot learn anything constructive from this process. As the Singapore Foreign Ministry said, taking such information out of context will only lead to a state of confusion, and will not provide the full picture.

Asharq Alawsat‘s Deputy Editor-in-Chief, Ali Ibrahim, also offers his opinion. He addresses the conspiracy theorists who hold that the US government leaked these documents intentionally to serve some devious goal. He concludes, correctly I believe, that leaks like this are a hazard of modern communications. He thinks that some corners were cut within the US government and again, I think he’s right. I am amazed that the US Dept. of Defense permitted its classified computer system to be accessible on machines that had CD/DVD ROMs and USB ports—State Dept. had banned those over 10 years ago, out of concern for precisely the kind of leak that occurred. He notes that private business are no less immune to this sort of attack and indeed, WikiLeaks is claiming that it is soon to release embarrassing documents coming from the computers in major banks.

No communication system will ever be utterly free from the threat that the information being transmitted will be compromised. We see that in stories about laptop computers containing credit card or other personal information being lost in taxis or on subways. We know all it takes is one disgruntled employee (or worse, an enemy ‘mole’) who has access to the data in order that the data become, overnight, public information. That is a real hazard of modern times.

Welcome to the world of cyberspace, which in very little time has extended a great service to humanity, and to the business sector, with the provision of vast amounts of information at the press of a button. However, despite the service it offers, there are also side effects and scandals, as can be seen in the ongoing publication of secret U.S. documents. The most recent leak consists of thousands of memos exchanged between US embassies and the State Department, which will inevitably cause considerable harm to international diplomatic relations.

Was this leak down to the online recklessness of a 23-year soldier, who served in Baghdad, as stated by US reports? Or was it a calculated operation with political objectives, as expressed by Iranian President Mahmoud Ahmadinejad in his statement yesterday? This issue will raise much speculation, argument, and conspiracy theories, as have previous political trends and stances related to major events over the past 10 years, particularly following the September 11th attacks.

Logical thinking would suggest that recklessness is the most probable cause for the leaked information, as it is really difficult to imagine that the US sought to achieve political goals by embarrassing itself and undermining its diplomatic credibility, amongst its allies and friends, through uncovering the contents of its secret talks. Similarly, it is inconceivable that the U.S. would seek to undermine its own credibility in the face of its opponents, by letting them view the secret cables exchanged between diplomats, if we assume that all information leaked was correct.