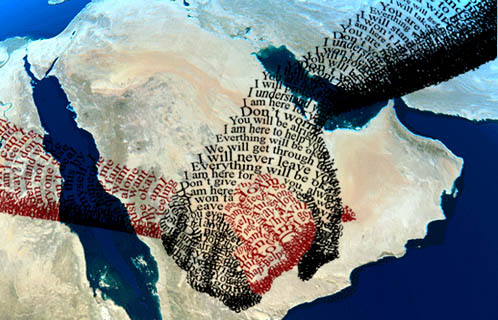 A couple of days ago a friend sent me a link to an article on the CNN website singling out ten must-read blogs from the Middle East. It’s a good list. I already knew about some of them, but I have added a couple to my favourites bar.

My only quibble about CNN’s list is that it picks up exclusively on Arab writers and – with the honourable exception of Mahmood the Bahraini Blogfather – most of the writers seem relatively young.

So I thought I would share a slightly more eclectic list of blogs from various parts of the Middle East and North Africa. Some are Arabs, some not. Given that there is such a large expatriate community across the region, their contributions should be recognised also.  And some are young, but others are, shall we say, less young!

Crossroads Arabia: I have written in more detail about John Burgess’s website in an earlier post. John is a former US foreign service officer who served in a number of Middle East locations during his diplomatic career. He writes mainly about Saudi Arabia from a US perspective. Erudite and sharp, he is a one-man compendium of media sources both from the Middle East and the US on subjects related to the Kingdom. His comments are wise, open-minded and undogmatic. Even though he is based in the US, I include him on the list because for any dedicated Saudi-watcher, he’s a must-read.

Mideast Posts: A blog-of-blogs based in Dubai that sees itself as a HuffPost for the Middle East. The site has grown rapidly since its inception last year. I declare an interest here – they use quite a lot of my stuff. Also some of the other sites on this list feature regularly. I like the site because they work with a wide range of bloggers from across the Middle East and beyond. Also they are continually expanding their list of contributors, so one encounters new gems all the time.

Tahir’s Blog: Tahir Shah is a best-selling travel writer who was educated in Britain but comes from a prominent Afghan family. His father was Idries Shah, a well-known Sufi philosopher and a prolific author himself. Tahir’s best-known books are In Arabian Nights, an exploration of the role of stories in Arab and Muslim cultures, and The Caliph’s House, the story of the year he spent renovating an old house on the edge of a Casablanca shantytown.  He has not updated his blog for some time, so I’m not sure if he has abandoned it altogether. But even if he has, you will find a wealth of material on Morocco, writing and a host of other topics in his archive. There are also a number of excellent articles on his website that you will find here.

American Bedu: As the title suggests, the author is an American woman living in Saudi Arabia married into a large Saudi family. Like John Burgess, she is a former US foreign service officer. Her blog takes a different tack from John’s though. She focuses on life in Saudi Arabia, and writes prolifically on social issues, women, culture and people she meets and interviews. Her perspective is personal, kindly and often moving. With a foot in both camps, so to speak, she is able to portray Saudi Arabia both from the inside out and the outside in. A very popular blog in these parts.

Saudi Jeans: Another well-known blog, the creation of Ahmed Al-Omran, who hails from the Eastern Province of Saudi Arabia. Ahmed writes on politics, social issues and much else besides. He has not been posting regularly of late because he is currently on a journalism course in the USA. But his posts are always interesting, and his blog is full of links to other sites. He is unusual in that he also writes an Arabic blog. He is often interviewed by the Western media when covering Saudi Arabia. Ahmed has been blogging since 2004, so there is a wealth of material on his site.

Robert Twigger: Robert is another travel writer, and a friend of Tahir Shah. He is based in Cairo. He writes about so many subjects that it’s not surprising that one of his abiding interests is polymathy. To give you an idea, his last three posts have been about point-to-point horse racing, two types of creativity and swarm working. He also wrote some compelling pieces during the Tahrir Square uprising. He has led desert and jungle expeditions, written a number of books and is a well-regarded poet.

Real Talk Blog: Ali Shah is, on the evidence of his blog, a well-travelled businessman from Pakistan based in Riyadh. He writes about business, life in Riyadh, entrepreneurship, Islam, the South Asian expatriate community and Pakistan. What I like about his blog is that it is full of stories. He has strong opinions, and I don’t agree with all of them, but his writing is vivid and never boring.

Man in a Desert: Fans of Al Jazeera will be familiar with the work of Omar Al-Issawi, a prominent Lebanese journalist and documentary producer. Omar was one of the founding editors of Al-Jazeera, and before then worked for BBC Arabic. As you would expect, his blog is full of informed and well-written opinion on political developments in the Middle East. His recent posts have unsurprisingly focused on events in Syria and Libya, but look at the subject categories in his blog, and you will find a wide range of subjects, from Pink Floyd and Osama Bin Laden to censorship and the International Space Station! Well written stuff from a gifted journalist.

Eye on Saudi: Saad Al-Dosari is a telecoms engineer based in Jeddah, which was my home town for ten years way back when. He writes about business, marketing and social life in the Kingdom. I enjoy his pungent comments on Saudi business life and practices. He’s particularly good on branding and the social media, and has written some interesting stuff on recent political developments in the region. An open minded, entertaining and lively blog.

Spirit 21: Last but not least, the blog of the journalist Shelina Zahra Janmohamed, who introduces herself by saying “They say that there is a glass ceiling for me because (as Michael Moore would put it) I am not a stupid white man. Another They says I should temper my passions and desires, my dreams and ambitions because I am not a brown be-turbaned man. Some Theys say that I should fight my oppression, that I should rout it and defy it. Some say I face no oppression, that I should be happy that I am blessed and should accept my fortunate and happy lot. If you are not with us, they say, you are with the others, and they are wrong.” She has written extensively for the UK Media and is a columnist with The National in the UAE. Last year The Times included her in their list of the 100 most influential Muslim women in the UK. Many of the posts on her blog are of material published in the various media to which she contributes. She is particularly strong on women’s issues. An excellent read.

So that’s my top ten. There are many more bloggers out there who produce interesting material, but not on a regular basis – some of them are just getting started. And I don’t pretend to have explored all the English-language blogs in the Middle East. If you have recommendations of blogs I’ve missed, please let me know. I’m happy to review another batch at some time in the future.

Meanwhile, if you haven’t come across these sites yet, check them out. I hope you enjoy them as much as I do.