Is this Al Ahram? Official Paper Gets Teeth 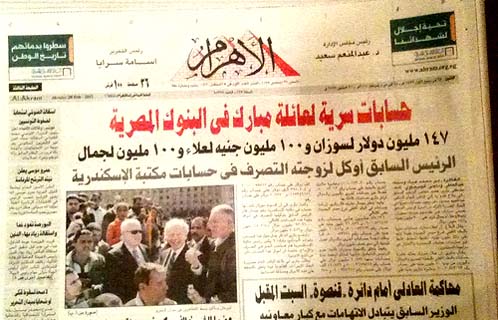 "Secret bank accounts for the Mubaraks in Egyptian Banks"

I still find it hard to associate the front page of Al Ahram with headlines like this (see above). I think many Egyptians agree with me: it is hard to believe that this is the Al Ahram official newspaper.

According to its story, the Mubaraks allegedly have got secret bank accounts in Egyptian banks. Suzanne Mubarak has got about $147 million alone,  Alaa Mubarak has got LE 100 million, just like Gamal Mubarak. There are allegations that the former president delegated to his wife the right to use the bank accounts of Bibliotheca Alexandria.

The family claimed that the amounts in Alaa and Gamal Mubarak’s bank accounts are less than has been announced.

There are strong rumors that Mubarak is currently in Tabuk , Saudi Arabia where he is undergoing chemotherapy, later confirmed by Amr Adib and Al Jazeera. Strangely the armed forces council has denied the rumor, as well as the one of Mubarak’s attempt to flee the country. The armed forces council has also denied the rumor that Mubarak was transferred to the international medical center at Sharm El-Sheikh.

Allegedly Alaa Mubarak wants to come back to Cairo along with his wife and son Omar. His son would continue school.