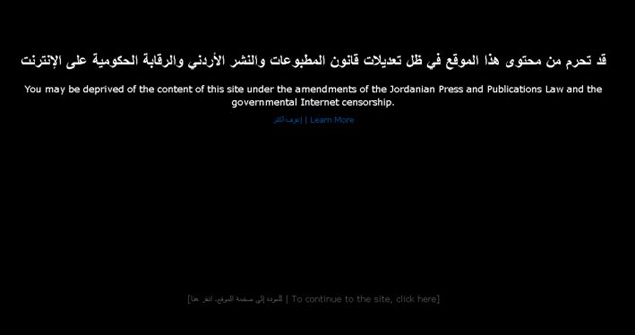 Many years ago, in 2005, I was proud to be one of the sponsors an artshow called ‘Into the light’, which protested the Amman bombings. Today, Jordan’s internet was plunged into the dark in a very different, but just as important protest.

You can take a look yourself by popping over to pal Roba Al Assi‘s blog here – one of hundreds of sites in Jordan that have gone ‘dark’ for the day. You can click through to a pretty pissed off post behind the tarpaulin.

They’re not kidding, either. The law appears to make the classic mistake, not unlike ongoing Lebanese efforts to bring the Internet into a media law, of confusing the web with print media. Under the law, websites (so badly defined it could include social media, blogs or any other online property) would be forced to join the press association, appoint an ‘editor in chief’ (a role with some very defined responsibilities) and also opens the door to blocking websites, something Jordan has very laudably avoided doing.

A moderate country with the most competitive telecom market in the region, tremendous intellectual capital and an important regional centre for ICT, IP and software/web development, Jordan’s smart and technically capable young people deserve better than muckle-headed legislation hewn from granite by politicians who wouldn’t know a website from a wombat.

Let’s hope someone noticed how dark it got today…

One Response to Into The Dark: Jordanians protest Media Law