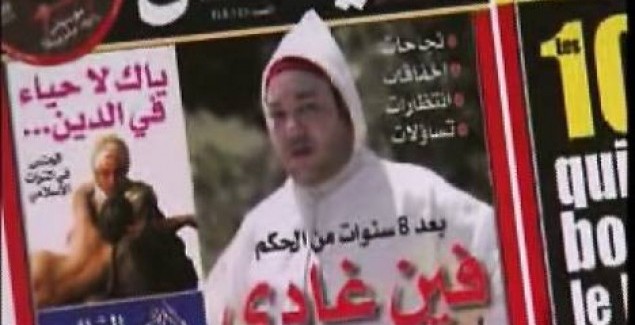 The Moroccan government’s announcement that it would issue new public media guidelines at the end of May has reignited a stormy debate around independent media in the kingdom.

The debate began nearly two months ago when the Islamist government, led by Abdelilah Benkirane, forced public television channels and radio stations to broadcast the five daily calls to prayer, which put many citizens on the defensive against what they saw as a deliberate attempt to Islamise an otherwise moderate sector of society.

The new law was supposedly imposed in an effort to decrease the prevalence of the French language in favour of Arabic, though experts and activists were quick to point out that the government did not pay nearly as much attention to broadcasting Amazigh, the original language of the country, over the airwaves.

For years, the 6th public television channel, as well as the public radio station ‘Mohammed VI for Saint Koran’, have been completely dedicated to religious issues 24 hours a day, seven days a week.

Following his ascension to the throne in 1999, King Mohamed VI jumped headlong into this debate by announcing his “project of the modernist and democratic society”, supposedly aimed at curbing the presence of extremist Islam in the public realm.

The King, who approved a new constitution on July 1 last year that grants the monarch substantial powers of arbitration, has come under fire for dishing out an inadequate response to the complicated debate.

Last month, his new head of government, Benkirane, of the Justice and Development Party (PJD), declared that the old, ‘Islamised’ guidelines were not set in stone and could be amended. The controversial law was scrapped, sparking scattered debate around the complicated issue of media in Morocco.

‘Islamisation’ a hurdle to democracy?

Laâraichi warned that the new manuals have to respect “openness, pluralism, linguistic diversity and the national identity”, all enshrined in the country’s constitution.

But his reaction has been criticised as having its own agenda.

“There are (some professionals) who stereotype Islamists as a threat to openness and modernity,” Ismail Azzam, a columnist for the local Hespress magazine, told IPS.

Moulay Touhami Bahtat, editor-in-chief of the local ‘Assdae’ (‘Echoes’) publication, believes, “Saying that the Islamists use the public media to Islamise (our) society reveals a blatant ignorance of the (situation).”

According to him, “The reality is that the public media was always an island completely separated from its environment, whose (practitioners) continue to act as if satellite dishes do not exist.”

Citizens have long lamented the poor quality of programmes on public TV, while management of the public media has been under close scrutiny since “official reports from the Supreme Court indicated very grave financial gaps (in the media’s accounts). The people in charge of the public media not only have to leave, but must be judged” on the issue of corruption, Azzam said.

The real fight, according to him, is not between Islamists and modernists, but between good governance and mismanagement. “Even if there were a leftist government, the opponents of the reform would have accused it of secularising the public media,” he explained. Abdessalam Benaissa, a prominent writer, commented in Hespress last month, “the suspension of the manuals (by Benkirane) without so much as informing citizens means that the first experience within the framework of the new constitution, namely the right of citizens to information, has just been violated.

“He is not alone in this critique. “The intervention of the palace in the affair of the media manuals was expected because we are not still at the stage of a parliamentary monarchy,” Azzam commented, referring to the core demand of the February 20th movement, for a separation of powers between the monarch and the government.

Benkirane, who was then the leader of the Islamist opposition, opposed the movement and stubbornly defended executive powers for the monarch.

“The head of the government shows courage only against unemployed graduates,” commented Azzam ironically, hinting at the violent police interventions against demonstrations by unemployed youth.

According to him, Benkirane benefits greatly from the current political order, in which the monarch retains several executive powers and Benkirane himself has a great deal of authority.

The government is bound by law to establishes media guidelines and subject them to the High Authority of Communications and the Audiovisual sector (HACA), which ratifies the new rules before making them public on an official bulletin board.A governmental committee, chaired by the minister of housing and former minister of communications, Mohammed Nabil Benabdellah, is now in charge of establishing new media guidelines, which will be released no later than the end of this month.

Though the new guidelines have already been ratified, Fatiha Aarour, a HACA representative, told IPS, “Professional secrecy forbids us from speaking to the press about this issue.”

Several Moroccan commercials have lately come on fire for undermining social and family relations by inciting wives against their husbands and ridiculing the mothers-in-law.

According to a report on Al Arabiya News, several private radio stations, TV channels, and websites have been broadcasting commercials perceived by many as violating social norms in order to promote the advertised product.

Some commercials advise women to be harsh with their husbands while others portray the mother-in-law as an intruder who needs to be gotten rid of for the sake of the family’s peace of mind.

This has prompted many activists to launch pages on social networking website Facebook to express their anger at commercials that “insult men” by telling women to mistreat them if they want to “live in peace.”

The campaign against the commercials aims to call upon the relevant authorities to be firm with companies that produce them and the media outlets that communicate them to the public due to their negative effect on Moroccan society, especially the uneducated people, said Monsef Farouhi, the admin of one of the Facebook pages.

“Those commercials usually address uneducated women who follow the advice without thinking. This affects their behavior and their relationship with their husbands,” he told Al Arabiya.

An official at the Higher Authority of Audiovisual Communication, who spoke on condition of anonymity, said the authority, which is in charge of monitoring the performance of audio and visual media, will not hesitate to take firm action against any media outlet that violates the principles of Moroccan society.

“However, we have not yet made a decision about the commercials that have caused this controversy,” he told Al Arabiya.

The reason for the prevalence of such commercials, the source explained, is that some channels or websites take advantage of the amount of freedom available to the media in Morocco to broadcast material that contradict the socially established laws of the conservative Moroccan society.

“These bodies only care about financial gains and do not pay attention to the negative social or ethical impact.”

The controversial content, he added, is not necessarily presented in an indirect way.

“Some commercials undermine social values in a subtle way in order to promote the product or service they are offering.”