Firebombed Newspaper Charlie Hebdo a Victim of its Own Making 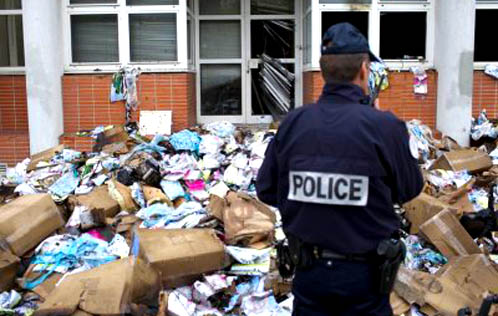 A thug is a thug. And thugs who firebomb newspaper offices deserve the harshest punishment under the law. But do I sympathize with the editors of the French newspaper Charlie Hebdo when someone firebombed their offices after publishing a cartoon of the Prophet Muhammad on its cover?

No. The violence is inexcusable and the bombers must be brought to justice. But Charlie Hebdo hardly deserves victim status.

Do I believe the attack was an assault on freedom of speech?

Charlie Hebdo decided to publish an edition “guest edited” by the Prophet Muhammad as an attempt at satire to “celebrate” the Islamist Ennahda Party’s victory in the recent Tunisian elections.

This celebration took place in the form of demeaning cartoons of the Prophet and women in burqas, spoofs on Sharia and such fanciful lines as “100 Lashes if You Don’t Die Laughing.”

All in the spirit of good, clean fun because, you know, Muslims need to lighten up.

I have been a working journalist for more than 35 years. The First Amendment is the most vital component of what I do for a living. Without it I’m not reporting news or giving an opinion, but just someone writing advertising copy. One cannot work effectively in journalism without the legal protection of free speech. So it is not without considerable soul-searching that I reject the idea of pushing for solidarity on the issue of free speech for Charlie Hebdo’s editors who insist on mocking the religion of 1.5 billion people.

There are still enough news people out there who consider journalism a calling. We take the words we write seriously, and we carefully weigh those words that have an impact on our readers and community. And power to all those opinion writers who believe that being offensive is the best way to deliver their message.

Yet it is no excuse for publishing offensive material just because you can publish it. There’s no excuse for promoting racial, ethnic and religious hatred and say it is okay because it is just satire. Playing the free speech card is a cop out. It is nothing more than an excuse to perpetuate stereotypes and stoke the flames of bigotry. Islamophobic bloggers argue that republishing the Danish newspaper cartoons is a display of solidarity to fight for our free speech rights. They argue that since Christianity is fair game, so should Islam. Why, Islamophobes whine, should there be a two-tiered approach to mocking and ridiculing religion if one religion gets a free pass and the other doesn’t?

The mainstream media have managed to steer clear of mocking Jews, but many publications revel in portraying the Prophet as a dirty, hook nosed Arab or having a bomb in his turban. The ugly stereotypes of Jews in Nazi propaganda are still fresh in our minds. Today, publishing such hateful images is unacceptable under any circumstances. However, Charlie Hebdo and its supporters believe it is just fine to demean Muslims in the same manner.

Charlie Hebdo chose to publish its Prophet Muhammad edition because it could and because its editors knew that it would anger and hurt the Muslim community. In a seriously twisted effort to encourage Muslims to assimilate in French society, the government banned the hijab in public institutions and the burqa everywhere outside the home. These laws have done nothing but to marginalize a segment of French society. Charlie Hebdo’s editors are well aware of a disaffected Muslim community, but decided to further marginalize them by publishing images of Muslim stereotypes. The newspaper has a history of this kind of behavior when it faced criminal charges in 2008 for “publicly abusing a group of people because of their religion” after Muslim groups had complained. A French appeals court acquitted the publication of the charges.

The editors knew of the consequences of publishing the Prophet Muhammad edition. There are plenty of nasty people willing to do harm over the smallest slight. But when bad things happened, the newspaper’s editors, in a cynical ploy to gain attention and in a bid to become free speech martyrs, cried that it was an assault on free speech. It was really an assault of their own making. Now they are milking their suffering to create an image that they are champions of a free press.

Enacting censorship laws certainly would certainly stifle press freedoms and I have grave concerns over the Organization of Islamic Cooperation’s efforts to pass anti-blasphemy legislation. But Charlie Hebdo’s editors and their ilk abuse the privilege of being journalists. Their behavior only strengthens the OIC’s argument that anti-blasphemy laws are necessary to keep bigotry out of the news media.

The newspaper’s staff can boo-hoo all they want – ultimately it they who are the bigots, manipulating their victimhood to gain undeserved support of the journalistic fraternity.