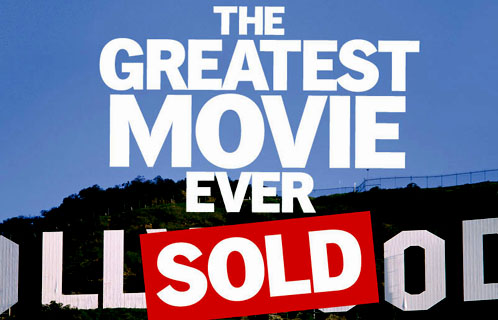 When it comes to documentaries, there’s a lot one has come to expect of Morgan Spurlock. The ability to take an idea that most of us have all thought of at one point or another and to document the process of that thought, is what has made his work successful, shocking and memorable. While Supersize Me explored the perils of fast food on one’s health, and Where In the World is Osama Bin Laden attempted to examine what it would take to actually find Bin Laden (back in 2008), his latest offering is unique unto itself.

POM Wonderful Presents: The Greatest Movie Ever Sold, is Spurlock on a mission to have his $1.5 million documentary about corporate sponsorship and marketing, fully funded by corporate sponsors. For anyone who’s ever watched a movie or a TV show or a brand seems to either pop up randomly, or become a momentary centerpiece of the show, this is the documentary that demonstrates the process that allows a brand to come alive on a silver screen. It is, as latenight talk show host Jimmy Kimmel describes it in one scene (where Spurlock promotes the film on Kimmel’s show), as “the Inception of documentaries”. The plot is essentially Spurlock going from one corporate office to another, attempting to garner corporate support for his film, all the while examining the impact of advertising on audiences. Between the boardrooms, Spurlock talks to just about everyone who can offer insight in to both the process and the social impact: from directors like Brett Retner and Quintin Tartino, to intellectuals like Chomsky, to marketing gurus who have been in the movie business before Reses Pieces ever made its appearance in E.T.

It is a documentary within a documentary, and Spurlock takes his sponsorship seriously. He drinks only POP pomegranate juice, which is the main sponsor, conducts interviews in a Sheetz restaurant, flies Jet Blue, sleeps only at the Hyatt, drives only a Mini Cooper, dresses in Old Navy, and puts on Ban deodorant before going out. After premiering at Sundance the film received more sponsors, with the city of Altoona, Pennsylvania even adopting the film’s title as it’s new name for 60 days after the theatrical release.

The film exudes a sense of irony probably never before seen on screen, and it survives on asking meaningful questions that don’t necessarily come with prepackaged answers. Floating from one question to another, the film dissects brands and their ability to make an impact, examines the issue of marketing transparency, and traces the extent to which advertisements are in-your-face, and Spurlock even pays a visit to a Sao Paulo, Brazil – a city that banned outdoor advertising all together. The brands that do in fact lend corporate sponsorship to the film, based more or less on Spurlock going in to their boardroom and pitching them the idea, are undertaking an enormous test in transparency. Instead of lending thousands or millions to have a logo or a product placed carefully within the plot line of the latest Hollywood summer blockbuster, these brands gleefully embrace the irony and the introspective nature of the film, and even dare to have their brand plastered on Spurlock’s leather Nascar-esque jacket. And Spurlock isn’t playing around; entering each of these meetings with detailed storyboards filled with ideas for product placement, and even 30 second commercial spots that eventually appear right in the middle of the film. The very concept of this being the “greatest movie ever sold” opens up marketing opportunities for each brand to showcase the “best car ever sold” or the “best song ever sold”, the latter of which is actually performed by the band OK GO.

Now how those companies attempt to ensure that they get their money’s worth and avoid having their brand trashed on screen is a treat to watch as Spurlock and his lawyer go through all the legal stipulations of each contract. If Spurlock has an agenda as a filmmaker to demonstrate the evils of advertising and how it’s ruining artistic integrity, or even manipulating us as consumers, that agenda is kept under wraps as he carefully balances his legal and financial obligations to his backers while attempting to raise important question. That balance in itself is well worth watching, and there are numerous moments where he goes from tongue-in-cheek humor to simply biting his tongue.

After all the blatant sponsorship and logo placement abound in this film, what is interesting to note is that it actually ends up containing less brands than some of the big blockbusters bring in, such as Iron Man 2. But while advertising helps pay for things, whether it is a movie benefiting from cross promotion or a city generating needed revenue, the film forces one to stop and wonder at what cost. Are we being had? Are our choices not only being affected, but being dictated to us by the sheer force of an advertising budget that plasters a logo every which way we turn? Are we being willfully manipulated?

While those of us in the Middle East may not necessarily face the exact same problems with advertising, we are facing very similar issues. Advertising is indeed plastered all across our cityscapes and advertising is taking on an increasingly in-your-face attitude. This film may only be demonstrating an inevitable future.