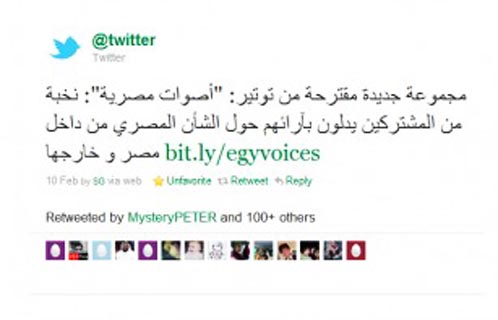 As the world watches the unprecedented developments in Egypt, which was dubbed “Revolution 2.0,” a number of media outlets and social media sites have also taken their own unprecedented steps by offering their services in Arabic for the first time. From Tweeting in Arabic to translating content, it looks like the Web is looking East these days, embracing the Arab World as a key target audience.

“#Mubarak will speak in 10 minutes .. History is changing and Twitter is speaking Arabic!”

Meanwhile, Twitter user Martin E was not pleased by the move:

“I Just unfollowed @twitter I don’t take kindly to arabic on my screen.”

Also last week the New York Times posted their first tweet in Arabic in which they asked for sources in Cairo, Alexandria and Suez. Vadim Lavrusik, a digital media journalist who writes for the social media blog Mashable said on his Twitter account:

“The @nytimes just sent their first tweet in Arabic. Wonder if news orgs will try this on social more often.”

The London-based newspaper The Guardian is also among those embracing Arabic content. Recently, the newspaper started offering a translation of some of its web articles in Arabic. They also Tweeted in Arabic to announce the launch of this service. It is also worth noting that also last week the US State Department has launched their own Arabic Twitter feed using the account @USAbilArab, which translates into “US in Arabic.”

It will be worth keeping an eye on this and see who will embrace the Arabic content next. As news from the Middle East is not showing signs of slowing down any time soon, I’d expect to see more international media outlets localizing more of their content to reach a wider Arab audience. Overall, it is definitely a good time to be an Arabic speaker.

Jordanian-American writer, journalist, and media professional based in Washington, DC, Natasha's main specialty is media in the Middle East where she develops and manages training programs for journalists in the Arab World. Natasha has worked as a reporter in the Middle East for more than a decade and is a former reporter and editor for Al Jazeera, the Jordan Times and Arabia Online.