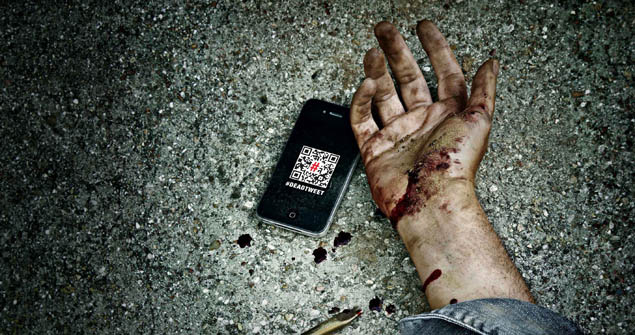 With traditional media officially locked out of Syria since the start of the revolution there in March 2011, citizen journalism has taken over the mantle, at a great cost.

It is through citizen journalism that news, photographs and videos of what is happening in Syria are now relayed to the outside world, at the heavy cost of detention, torture and death.

One of the latest citizen journalists to have been arrested in June is Fatima Khaled Saad based in the Syrian port city of Latakia.

Reporters Without Borders says, “It seems Saad’s only crime was to have possessed recordings of songs praising the uprising by Syria’s youth.

“She has been subjected to a great deal of physical and psychological violence during her arbitrary detention, which must end. We call for the immediate and unconditional release of Saad and all the other journalists and citizen journalists detained in Syria.”

Security officials arrested Saad, her father, Khaled Saad, and her brother during a search of their home on June 28. They seized her digital camera, memory card and telephone. Her father and brother were released but Fatima Saad was rushed to Latakia military hospital after being mistreated during a lengthy interrogation by intelligence officers.

On July 17, she was transferred to the headquarters of the military intelligence branch in Damascus where, according to some Reporters Without Borders sources, she is being held in Section 291.

“The way the regime tends to treat its opponents is grounds for concern about Saad’s fate. It is clear that the nature of her past activities is such that her life could now be in danger,” it notes.

Reporters Without Borders has launched a #DeadTweet campaign to take us into the daily hell of citizen journalists.

To pay tribute to the unprecedented number of citizen journalists who lost their lives to send out pictures of the uprising, Reporters Without Borders and its advertising agency JWT Paris, through a unique live Tweet, are bringing to life the experiences of people who find ways of circulating information amidst danger.

The Assad government has killed at least 38 citizen journalists and media workers since the start of the uprising in Syria in March 2011.
Their only crime was to disseminate information and spread the truth about the bloody crackdown that is still in progress against the Syrian people. Their main weapons are mobile phones and the Internet.

The #DeadTweet campaign image shows a lifeless hand covered in earth and blood. Next to it, there is a smart phone with a QR code on its illuminated screen. When it is scanned, a Twitter-style application starts up, taking the user into the live tweet of an imaginary citizen journalist in the midst of the conflict in Homs. The application shows his final minutes in detail through his feed. Events gradually take an unexpected turn until the final outcome.

The press and poster campaign uses the QR code to raise awareness about citizens’ efforts to cover conflicts in countries where authoritarian governments impose a media blackout by trying to shut out foreign journalists. When journalists can no longer do their job, these citizens are an essential information link and play their part in informing the world, sometimes paying the price with their lives.

The past few weeks have been particularly deadly, with around 10 citizen journalists killed since late May, says Reporters Without Borders. June saw the death of an unprecedented number of citizen journalists who sacrificed their lives to provide video footage of the uprising, the crackdown and now the military operations by armed groups fighting the ruthless Assad regime.

Among them:
Mohamed Sami Al-Kayyal, arrested June 27 in the coastal city of Tartus.
Wael Omar Bard, killed June 26 in Jarjanaz, 40 km south of Idlib.
Hamza Mahmoud Othman, fatally shot by a sniper in Homs on June 21.
Ali “Al-Jedd” Othman, Hamza’s brother, the citizen journalist who ran the Baba Amr press center in Homs until it was destroyed last February and who was then captured by intelligence officers on 28 March.
Bassim Darwish, died June 15 from the injuries he sustained two days earlier in an explosion while covering the air bombing of Rastan, a town 30 km north of Homs. He was one of the founders of the Rastan press center and had covered many demonstrations in the region as well as the regular army’s operations.
Ayham Youssef Al-Hariri, a 35-year-old father of five and anti-government activist since March 2011, fatally injured by the blast from a shell in Deraa on June 13.
Abdelhamid Idriss Matar, a 22-year-old student of agro-food engineering at Baath University in Homs, fatally injured by a tank shell as he filmed an assault on Al-Qussair, a town 25 km south of Homs, on May 31.

Reporters Without Borders already reported the deaths of two other citizen journalists: Ahmed Hamada in Homs on June 16 and Khaled al-Bakir in al-Qussair on June 10.

It also condemned the deaths of two citizen journalists in detention, Hassan Mohamed Al-Azhari and Rami Ismael Iqbal.
Arrested in Latakia on April 13, Azhari was transferred to an intelligence agency prison in Damascus. His family was told he died in detention — probably under torture — on May 17. Aged 24, he was one of the founders of the Coordinating Committee in Latakia, where he filmed demonstrations and the government’s crackdown.

Iqbal, 28, died in detention following his arrest last December 21, but it is not known exactly where and when he died. A citizen journalist since the start of the uprising, he filmed local developments and fed information to foreign media. He was first arrested on March 20, 2011, for giving an interview to the BBC and went underground after his release.

The concept of citizen journalism — or public, participatory, democratic, guerrilla, or street journalism — is based upon the testimony and reporting of the news by the public.

Citizen journalism critics claim it is unregulated, subjective, amateurish and haphazard in quality and coverage, which is, I think, precisely its value.

Abraham Zapruder, who filmed the assassination of President John F. Kennedy with a home-movie camera, way back on November 22, 1963, is sometimes presented as a forefather of citizen journalists.

Thanks to the Internet, we’re all now able to share information globally. It is this power that is threatening, especially in times of war and conflict. What you could only get through newspapers and television, is now available instantaneously online through blogs, podcasts, streaming videos, social media networks and web-related platforms. You just need a smartphone, a laptop and an Internet connection.

My thoughts and prayers are with Fatima Khaled Saad, Bassel Khartabil, Tal al-Mallouhi and the hundreds of political prisoners, prisoners of conscience and citizen journalists currently held in Syria. May they all be back with their families and online before long.