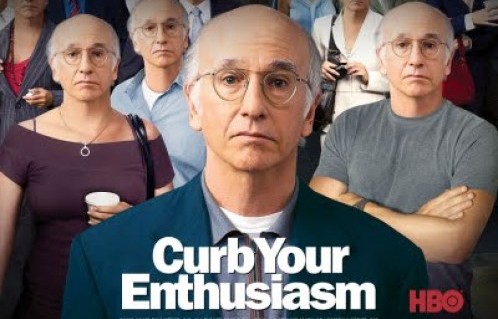 A larger-than-usual debate has erupted over the latest episode of Larry David’s Curb Your Enthusiasm: “Palestinian Chicken.” Our beloved anti-social, misanthropic, crazed individualist has taken his shtick to the freighted arena of Israel/Palestine relations, and popular culture may never be the same.

Many have dismissed the episode as racist, perpetuating stereotypes and dangerously false representations, and they would be right. Others have found great humor and even brilliant social satire in the episode, some of it groundbreaking, and I would also have to agree that they are correct. It has been surprising that many in the longer-than-usual discussion thread (at Eleanor Kilroy’s post) dismissed the show as just racist, unfunny and unwatchable, so it seems a closer look at the less-discussed subversive side of this episode is warranted.

First, a disclaimer. Yes, this episode is filled with typically racist, stereotypical, reductive, and problematic representations of Palestinians, and for that I make no excuses or apologies, — it reflects the impoverished and racist/imperial nature of US popular culture and discourse at this time and place. In this sense, it is much like Bill Maher’s Real Time, Family Guy, most of CNN, and tons of other mainstream shows that betray an air of intelligence or even progressiveness while reproducing colonial and racist assumptions. And of course, different audiences, with different political and cultural orientations will watch this show, like all “texts,” differently. So, there is no single correct reading of this show, just endless debate and discussion, which is itself a reflection of both the quality of the show and the significance of the issues it exploits for comedy.

However, whereas Maher’s anti-Arab racism is consistent, he usually paints his Jews, especially when secular and/or Israeli, as saints. Here Larry David is much more balanced, as a consistently scorching critic of US Jewish foibles. For example, “Palestinian Chicken” continues a thread exploring the “pitfalls/consequences of [knee-jerk Jewish] tribalism & exceptionalism,” started in the first episode of the season, “The Divorce,” in which Larry fires a Jewish-acting lawyer named Berg only to get burned in his divorce settlement with the “real” Jewish lawyer he stereotypically thought would be better. [Thanks to Adam Shapiro for making this connection.]

Some discussants worried that Jews watching this episode felt affirmed by it, and that Arabs uniformly hated it as racist, but a review of comments in US and Israeli media suggest this was far from uniform. At Haaretz, Israel’s leading daily, several commented that David was a “self-hater,” with a “stupid message,” that “purposely made Jews look like ‘racists’.” On HBO’s official CYE page, we find: “this episode crossed the line. It was disrespectful, insulting and downright antisemetic. Shame on you, Larry David!!” next to the comment from Faisal S., “I am Jordanian and absolutely loved this episode. I think Larry is brilliant…. i am laughing my a… off!!” And Nathan Burstein at The Jewish Daily Forward concluded his review with: “Some Israel lovers will find ‘Palestinian Chicken’ distasteful, but it’s a hit among David’s fans.”

My argument is that beyond the serious cultural limitations we sadly have come to expect on US television, there is also something else in this episode, something subversive, which is not common at all, and which casts light on the significant cultural moment we are living through. In this sense, I think too many critical thinkers with good politics have moved too quickly to throw the baby out with the bathwater on this one. Amidst the gross but predictable equalizing of two profoundly asymmetrical “sides” in this very real conflict, David and crew actually showcase Jewish racism in both its extreme and its liberal forms, and this is something truly rare on television. They also give us brief flashes of otherwise censored concepts like “occupation,” “settlements,” or even just the real-life restaurant posters which show an Israeli tank facing down children, or declare: “Right –vs- Might,” and “Visit Palestine” – things we never see on tv.

It can be hard to tell when these aspects of the show are intentionally subversive, and when they are more the unintentional product of David’s ad-lib production style in which his cast reproduces its own cultural assumptions whole cloth, whether or not tongue-in-cheek. Whichever it is, and we may never know for sure, I think the comedic tensions running through the show mirror a broad shift in the zeitgeist of both Jewish and non-Jewish [Western] public opinion about Israel that reflects the growing success of the non-violent Palestinian peace movement centered around Boycott/Divestment/Sanctions [BDS] called for by Palestinian Civic Society.

It is not an accident that this show, shot earlier this year, appears at a time when anti-boycott legislation in Israel is being universally decried as undemocratic, even neo-fascist; when Alice Walker and hundreds of activist were sailing toward Gaza with letters, but were thwarted by Israeli frogmen cutting boat propellers in the dark of night; when a rising tide of artists and veterans of the anti-apartheid movement in South Africa are vocally joining the new anti-apartheid struggle against Israel, as seen in the recent Feminists of Color Solidarity Statement signed by Angela Davis and others.