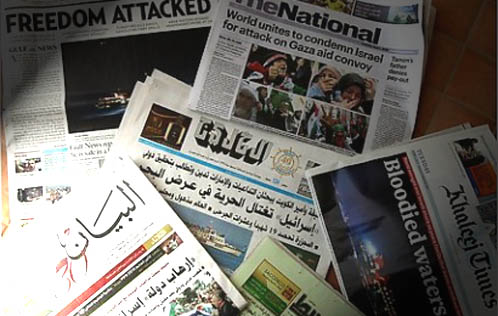 The Washington Post and other international news outlets just published this Associated Press article detailing the condemnation of the UAE’s trial against five activists here:

The statement by the 7-member alliance marks the highest level international pressure over the trial. The charges could carry long prison terms.

The activists, including a prominent blogger and an economics professor who has lectured at the Abu Dhabi branch of Paris’ Sorbonne university, were charged with anti-state crimes after signing an Internet petition calling for constitutional changes and free elections. Political activity is severely restricted in the UAE, an alliance of seven semi-autonomous states, each ruled by a sheikh who inherits the post. There are no official opposition groups in the country, and political parties are banned.

The UAE has not had street protests like those that erupted this year across the Middle East, including in neighboring Bahrain. Authorities moved aggressively to keep demands for political change, inspired by the Arab Spring revolts, out of the Gulf federation that includes the glitzy city-state Dubai.

The five activists were arrested in April and charged with insulting the UAE’s rulers and endangering the country’s security. If convicted on all charges, they could face decades in prison.

A verdict is expected Nov. 27. The defendants have no right to appeal.

While journalism in the UAE has certainly improved in the last few years, it still suffers from noticeable lapses such as the avoidance of contextual reporting on this trial. The main newspapers have run articles after each court appearance, but they have devoted no space at all to the controversy surrounding the arrests. The press has ignored important aspects of the case such as this denouncement from human rights groups and a statement from one of the activists detailing alleged abuses in jail while awaiting the trial.

As I detailed in my recent research on media literacy in the UAE, what a press outlet chooses to cover has profound impact on the knowledge of media consumers. The people of the UAE deserve to know about the context surrounding this trial, and the press does them a disservice by ignoring such crucial elements of the story.