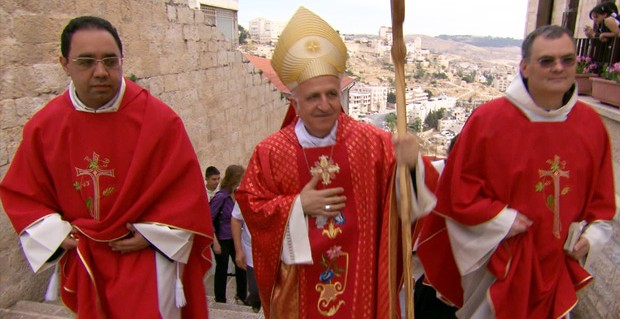 Israeli Ambassador Michael Oren not only called the head of CBS news in an attempt to quash a report on the displacement of Palestinian Christians by the Israeli Occupation of the West Bank and East Jerusalem, but he briefed Prime Minister Binyamin Netanyahu of the far right wing Likud Party on his attempt.

Here are the top ten reasons Israel’s Likud Party would have wanted to censor American television news on this occasion (and of course we don’t know all the occasions they have successfully done so):

2. The report mentioned that some Palestinians are Lutherans, Catholics and Episcopalians, establishing a link of commonality between them and Americans. The Israeli Likud Party wants Americans identifying only with Israelis, not with Palestinians.

3. The report told Americans that Israel is occupying and colonizing Palestinian land. Most Americans think it is the other way around because of the success of Likud disinformation.

4. The report let it slip that Palestinians in the West Bank need a permit to travel to Arab East Jerusalem and are subjected within the West Bank to humiliating check points that turn a 7 mile journey into an all-day ordeal. This system sounds an awful lot like the old South African Apartheid.

5. The report allowed Palestinians to speak for themselves and to refute Oren’s anti-Palestinian talking points. It is a key principle of right wing Israeli propaganda that Palestinians should never be allowed to challenge the Israeli narrative on American television.

6. The report allowed a prominent Palestinian businessman and Coca Cola distributor to say that he knew of no Palestinian Christians who were leaving the West Bank and Jerusalem because of Muslims but that rather they were leaving because of Israeli oppression.

7. It allowed the Palestinians to point out that the West Bank now looks like Swiss cheese, with Israeli colonies grabbing the good land and water, and the stateless Palestinians pushed into the holes.

8. The report described the Palestinian Kairos Document, calling for nonviolent, peaceful struggle by Palestinians against Israeli Occupation and land grabs. Likud propaganda insists in racist fashion that all Palestinians are inherently angry and violent and that their protest against being made stateless and homeless by Israel is irrational.

9. The report quotes an Israeli scholar who puts “Political Judaism” on par with “Political Islam.” It is a key principle of Likud propaganda that no movement in Israel may ever be compared to movements in the Muslim world.

10. The report allows Palestinians to point out that the way the Israelis built the Separation Wall isolated Bethlehem, Jesus’s birthplace and a city that still is 18% Christian, had made it “an open-air prison.

2 Responses to Censorship Undone: CBS Stands Up to Israeli Pressure