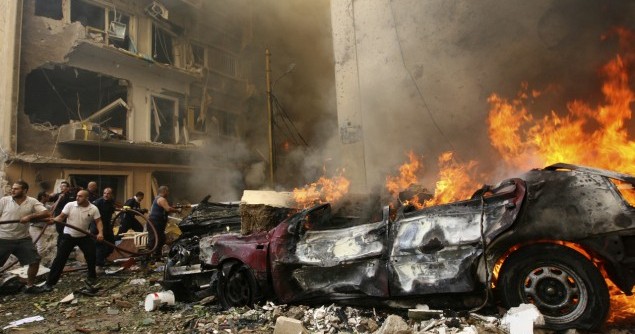 I follow the #Beirut hashtag (Tweetdeck’s multiple columns are a wonderful) and so it was that I had just finished putting up Friday’s guest post by Micheline when I caught the first tweets from Achrafieh as people reported a loud explosion, some asking ‘What was that?’.

The tweets quickly became more specific, Ashrafiyeh pinpointed and a large blast. People close by talked of the ground moving, while an increasing number of tweets mentioned Sassine Square – a busy area of restaurants and cafés. There was a sense people were holding back from saying it was a bomb, perhaps a gas cylinder. Anything, in fact, but a bomb. Nobody wanted to admit it could be that.

The first twitpics showed a black cloud above the city. Now tweets talked of a bomb, people linked the location to the headquarters of the March 14 movement – the anti-Syrian coalition named for the date of the last such bombing in Beirut – the massive car bomb that killed Rafiq Hariri.

News started flowing thick and fast. A car bomb, very big. People were reporting casualties. The first images from the scene came in, confirming what people had feared – a massive explosion in the busy area. The phone network was down but 3G was still working. Mainstream media reports were mentioned, LBC first to the news. The volume of retweets was going up as mainstream outlets were quoted. Some outlets ran with graphic images of body parts and pools of blood. Reports of deaths from mainstream outlets, one dead said one outlet, two said Reuters, three said another. The UK’s Guardian was quoting tweets and showing twitpics on its website, many people cited Reuters’ reports. Twitter started carrying calls for blood from the hospitals, queues built of up people volunteering to donate.

Joining in the fray, reporting at Twitter speed, mainstream outlets were helping the confusion as they posted information without confirmation and certainly lacking the ‘context and analysis’ that have been so often cited as a reason for their relevance. The volume of retweets was very high now,  voices from around the region joining what had been a very local conversation.

It was horrible to watch. So many friends in Beirut and here, worried for loved ones who lived or worked in the area and then, as the news sank in, so much bitter disappointment that once again the lives and hopes of ordinary people are to be sacrificed, that the optimism was to be ground out of everyone and replaced by fear. Waking up the next day to the headlines confirmed that yes, this was an assassination, that a key member of the March 14 movement was dead, along with seven others and tens more had been injured.

As so many times before Twitter looked like a Lorenzian water wheel. Initially it efficiently carried eye witness reports, the first news breaking and confirmed by multiple sources and twitpics. With the huge increase in volume comes retweets and second generation shares, the water wheel starts to become more erratic and it becomes harder to filter the information.

What I found interesting was the sight, the first time I have noticed it, of mainstream media sources getting right in there and posting flows of unconfirmed information, reprocessing tweets and posting ‘breaking news’ with clearly little attempt at filtering the raw data. People quickly quote mainstream sources because we have so long been told we can depend on them, yet the information they were providing was of no different quality to that being shared by eye witnesses. Mainstream media were retweeting witnessesx. I thought it a dangerous precedent.