Bahrain: Retaining Reason in a Battle of Emotions 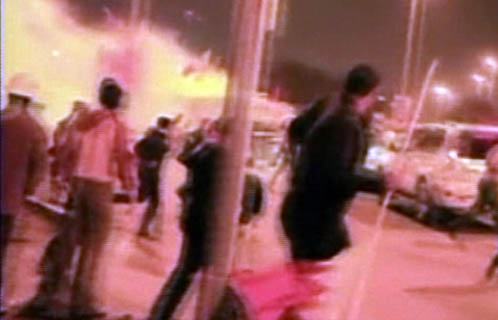 It’s four in the morning. Outside my window there’s a full moon – the harbinger of madness. Cocks are crowing and the thak-thak-thak of nearby helicopters has woken me.

I am not a news reporter. I was not at the Pearl Roundabout when security forces cleared the area. Nor was I at Salmaniya Hospital counting the bodies and interviewing the wounded. In the past 72 hours I have had phone calls and texts from friends  – foreigners and Bahrainis – on both sides of what has now become a divide. They have been telling me their stories and perceptions of events. In my judgement, these people are not liars. They are people of goodwill who pass on what they hear – some in anger and some in fear. Or both.

I have learned something in the past three days.

It is easy to form judgements based on reports of events thousands of miles away. You see stories from newspapers you trust, TV channels you believe would report the big picture as well as the minutiae, and reporters you respect. And then you form a view.

This is the first time since the troubles in Northern Ireland that I have lived in a country in such turmoil. But in the days of the IRA campaign I was firmly on one side. It was my country in jeopardy. I walked through the streets of a city gripped by fear the morning after a bomb had killed 20-odd young people in a pub I knew well. I had no Irish republican friends. I could understand the grievances that led to the riots and ultimately the bombing and killing that blighted the next two decades. But understanding them is not the same as hearing them from somebody you like and respect. And it’s certainly not the same as accepting that murder, maiming and intimidation are legitimate activities in pursuit of a political end.

What I have learned from Manama is a lesson in emotion. That it is not anger that drives people to uncharacteristic decisions, but fear. One side fears the loss of its privileges, its wealth and political primacy. The other fears for the future of its children. It fears that the next generation will not be able to fulfil its dreams. It fears that the sacrifices of the older generation for the sake of the next one will be in vain. And fear begets decisions that are often rational, but are based on assumptions derived from emotion. On an intellectual level I have known this for as long as I have thought about it. But this is the first time that I have witnessed at close quarters the effect of fear on both sides of the divide. Among friends and acquaintances who I always thought were on the same side.

When you watch tanks crush bodies in China, or see emaciated prisoners in Srebrenica – all from the comfort of your own home – it’s easy to respond emotionally. To feel outrage and indignation. To condemn. But when you watch the stones flying in Tahrir Square through grainy YouTube videos, you only have the scenes continually replaying in front of your eyes, and the guidance of reporters at the scene, to help you form a view. What’s going on? Who started this? Why is this happening? Half the time, the reporters have no more information than you do. Again, you rely on media you trust, and take a view. And even if you can’t take a view, you watch with despair – another emotion – at the acts of inhumanity unfolding.

But when you are living among the protagonists, and you have friends in villages and palaces, your critical instincts go on red alert. You are torn between the evidence presented to you, and an unwillingness to believe that this is the whole story. Because to accept the story wholesale from one side feels like betrayal of friends on the other side. You say to yourself: “how can this be true?”

These conflicts are perhaps not so troubling for Nick Kristof of the New York Times, who dismissed as “preposterous” claims from the government that knives and swords had been found at the Pearl Roundabout, on the basis that he saw women and children sleeping peacefully in the hours before the clearout. Why preposterous? Is it not possible that some of the protesters, fearing aggressive action from the police, brought weapons into the square for self-protection, though not necessarily for acts of aggression on their part? Equally, would it be logical for knife-carrying protesters to carry out attacks on policement armed with batons, teargas and shotguns?

I mention the sword story because Kristof starts his article with the statement that:

“As a reporter, you sometimes become numbed to sadness. But it is heartbreaking to be in modern, moderate Bahrain right now and watch as a critical American ally uses tanks, troops, guns and clubs to crush a peaceful democracy movement and then lie about it.”

The emphasis on the last five words is mine. Harrowing as his report is, the only evidence he presents for one of his central assertions, that the government lied about the events, is the story about the knives and swords. Is that evidence sufficiently clear to justify such a blanket statement?

Kristof’s story eloquently reflects the indignation of the people he interviewed in the aftermath of the clear-out. He quotes eye-witness reports of brutality, and states that he has seen the bodies. He goes on to say:

“So here’s what happened.

The pro-democracy movement has bubbled for decades in Bahrain, but it found new strength after the overthrow of the dictatorships in Tunisia and Egypt. Then the Bahrain government attacked the protesters early this week with stunning brutality, firing tear gas, rubber bullets and shotgun pellets at small groups of peaceful, unarmed demonstrators. Two demonstrators were killed (one while walking in a funeral procession), and widespread public outrage gave a huge boost to the democracy movement.”

All of which may be true. But as far as I’m aware, he didn’t witness the “acts of stunning brutality” earlier in the week. He didn’t mention claims by the government that those fired on had lobbed Molotov cocktails at the police. That last year during Ramadan there had been alleged attacks on police in the villages, and that an innocent bystander from India had been severely burned when his car caught fire, and that he subsequently died in hospital. That across many of the roads of Manama there are the scars left by tyres laid across the highway and set alight. He didn’t consider that the violence inflicted upon the protesters might have been motivated to an extent by fear on the part of police. They are humans too.

I am not picking apart Kristof’s article to justify the actions of the government or those of the protesters. I am doing so to make the point that he represents the New York Times, one of the most influential newspapers in America. And that if I was an American citizen reading his piece, and I knew little about Bahrain, I might have some sympathy for his suggestion that it was time for regime change, made with the very simple conclusion that “when a king opens fire on his people, he no longer deserves to be its ruler.”

Perhaps I would have come to that conclusion if I was free of the welter of conflicting opinion and emotion to which I am exposed as a close bystander who actually lives in the country. But I probably wouldn’t have considered that by the same logic it would have been right for Great Britain to have forced the abdication of Queen Elizabeth II after the shooting by paratroopers of 13 citizens in the 1972 Bloody Sunday riot in Londonderry, or for America to have impeached Richard Nixon after the Kent State shootings in 1970. Yet in neither case did the vast majority of citizens consider such action to be either feasible or desirable.

Emotions I understand. Kristof is human, and he feels emotion about what he reports. But what I have learned from this event – through experience rather than theory – is that it is easy to come up with clear-eyed conclusions when you witness one end of the emotional spectrum and don’t consider all the other emotions in play.

By writing this I realise that I run the risk of upsetting one body of opinion or the other. So be it. But I want any Bahraini reading this to understand that any form of violence, anywhere in the world, makes me sick to the stomach. I am for Bahrain. I love this small island and I love its people. I believe in human rights, in equal opportunity and the rule of law. These are my emotions.

But if there is to be a way forward that does not involve repeated cycles of violence, it will be because the parties in conflict recognise the emotions of the other, rise above instincts for revenge and retribution and reach a settlement in which there are no losers. Too soon for that, perhaps. But with wise people to the fore, Bahrain can get there.

One Response to Bahrain: Retaining Reason in a Battle of Emotions